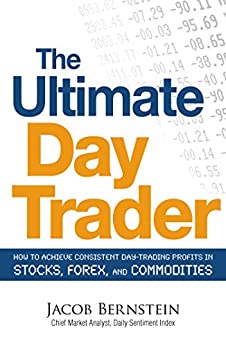 "Jake is an expert on preparing any trader to deal with different market scenarios. His powerful day trading concepts can be applied to any market." - Matt Zimberg, President, Optimus Trading Group" --此文字指其他 kindle_edition 版本。

Steve Burns
5.0 颗星，最多 5 颗星 This book is a must have for day traders
2010年2月12日 - 已在美国亚马逊上发表
已确认购买
I am a successful day trader and Jacob Bernstein has been key in my success. I have built numerous successful systems based on his principles from his books. Here are ten of the cardinal rules from this book:

1. Do your home work. You need to be prepared for all your trades through each stage of the cycle from the set up, to trigger to follow through. Keep your charts up to date, watch your signals, trail your stops to lock in profits, keep to your stop losses. Most importantly decide on your system before you start trading do not make up rules as you go. Study how systems performed in the market and then follow them in real time.

2. Focus and specialize. Pick only a few stocks or markets to trade and become an expert on them. Understand their time of day action, volume, price range, and risk parameters. Do not be a Jack of all Trades and master of none.

3. Be consistent. You must be consistent in your application of methods. Work the same schedule each week. Follow the same systems take the same stop losses. Trading is a business and must be ran with the same discipline as a business. Be consistent to give your methods a chance to work. Once you have back tested and proven your system has worked do not abandon it when you you have a few losing trades. Even the best systems can easily have six consecutive losing trades. Aim for an average win per trade.

5. Don't trade any stock or futures contract that scares you. You must be comfortable with the amount of risk you are taking on in any trade to be able to make good decisions under the stress and pressure of trading.

6. Avoid reacting to news reports unless you have used specific triggers. Do not chase the market after news is reported unless you have a system for doing that. Generally the people that buy the rumor or expectations and sell the news are successful, not the people rushing in after the news is reported. The news is usually expected and priced in.

7. Avoid internet chat rooms. The vast majority of these are filled with novices and people trying to pump or dump their holdings. I have found no value in these over the years either.

8. A day trade is a day trade. One of the riskiest things you can do is carry a losing day trade into the next day. This one rule has saved my thousands of dollars. You must cut your losses no matter what before the closing bell each day.

10. Your big money will be made in the big moves. Traders must understand that on average 80-90% of their profits will be made on 10-20% of their trades. It is important to have a large enough stop loss to allow your trade to be successful but to cut your losses when your system says to. Also it is crucial to allow your winners to run by using trailing stops to lock in profits. You must have a limited down side with an unlimited upside, that is what will cause you to be a winning trader more than anything else.

Unless a trading method is 100% objective in its rules and implementation, your odds of success will be limited. Success in day trading is limited by the emotional responses that are born from subjective decisions. This book explains the psychology needed to be a successful day trader and gives many strategies and systems to get you started in the day trading game. This book will also help day traders that need to begin to win on average. I highly recommend.

Robert D.
5.0 颗星，最多 5 颗星 Aside from a few editing errors--a good book
2012年3月21日 - 已在美国亚马逊上发表
已确认购买
I see a lot of gruff from the other reviewers. I think differently. Maybe I am not so experienced. I have only been practicing day trading and day trading for a year now. Like J. Bernstein states in the book, "...if you are new to the markets, read Toni Turner's A Beginnner's Guide to Day Trading Online." It will help you with the basics and is very comprehensive--read it twice(my thought).

Now, about The Ultimate Day Trader. Yes, a few typos and mislabeled charts. However, I worked my way up from trading GE, NFLX and MSFT, etc. to the futures market. I believe that this book is GREAT for this vehicle of trading. Maybe I am finally starting to see the bigger picture after thousands of hours looking at moving and static charts, regardless, this book will help you once you log in some time with the markets and technical analysis. It shows you how to be where the market is going to be before it is there with your orders in place already. I am actually a little in awe and disbelief at how simple and how well the MAC(Moving Average Channel) trade works as long as one knows how to spot support and resistance and get your order in before it gets there. The author expects you to know how to do this already(spot support and resistance) and does not spend a lot of time on it. Once that MAC triggers a trade, you find the R/S levels you put in an OTA Limit, OCA Stop Market, and an OCA Market-if-Touched exit(this last part is my input). Mark Douglas, in Trading in the Zone, talks about doing your risk reward analysis after predicting where the market will be and then putting in your orders before it gets there. When I first read this, I was like you gottta be kidding me, how the heck are you going to do that? Well, it simple, once the trend changes(which the MAC setup identifies) set the buy or sell at r/s and put your stop on the other side and put your target exit near the opposite r/s level. A couple of the trade techniques in Bernstein's The Ultimate Day Trader, if used in the markets he suggests,are perfect for this kind of "TRAP" setting.

I call it a trap, like trapping a chicken for dinner as opposed to running around the barn yard tiring yourself out trying to catch one. Just set a trap at a likely place it will be and come back later and see if dinner is there or not. Trading can be the same way.

Using OHLC bars(old school for me) was actually refreshing after learning to read candlesticks and using them for a year. I have the bars just one color--blue on a black background. I do not even read them--just use them as R/S indicators and when two pop out of the channel for a trade setup/trigger. Man-o-man, after watching red and green candlesticks form patterns for a year, it is really nice to not even have to watch that--it will drive you a little nutty after a while and Bernstein's method is much simpler and easier on the eyes. Even though candlesticks can predict a move sooner than a OHLC bar, that is not how the bars are used so the disparity doesn't matter in this instance.

There is a problem with the one indicator: the 28 momentum with an intersecting 28 moving average of momentum trigger; not that it doesn't work but many trading platfroms don't put upper and lower indicators in the same grid. That is something the individual trader will have to work out for themselves.

I bought this book more than 10 months ago and just read a few chapters: mainly the beginning and the end, and in the interim have read Turner's book, Douglas's two books, Bernstein's How the Future's Market Work, some(1/2) of Brown's Fibonacci Analysis(an incredible read), Schwagger's Market and New Market Wizards and Mastering the Trade by John Carter, and sections from several other books on Candlesticks, Techs in general and trading psychology. I just finished The Ultimate Day Trader a few weeks ago. I would have to say very simple, to the point, and in its simplicity it is GREAT. It's quality not quantity. He states the biggest obstacle to making what is in his book work is the trader himself/herself. All I can say is spend some time with the markets both trading and practice trading, read this book, practice some more and then read it again. You might be suprised. It is not the Holy Grail but that is only inside of us--we just need the right experience, discipline and guidance to see it, and this book will help.

He states in the book that it is a book of "methods" not a book of "systems." This is the classic Plato vs Aristotle dichotomy. One leaning towards the efficacy and insight of the subject and the other towards the utility of the object in an external framework. If one leans too far in either direction one is out of balance. He states that his techiques cannot be back tested well because one cannot backtest the trader's consistent follow through in maximizing the trade. If one wants a machine like system that does everything for them, this book won't do it. But, if one wants(what seems my opinion) to be some solid trading strategies that a somewhat experienced trader can use, then these will help. Personal Awareness and Self- Analysis are more important than just technical analysis.

He, Bernstein, comments on the use of mystical and mythical patterns in trading(even though I love this aspect of trading too) and, yet, he states how there are simpler ways to make money. He is right and his book shows you the way.
阅读更多
10 个人发现此评论有用