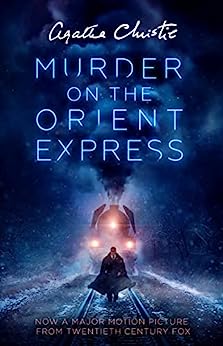 Just after midnight, a snowdrift stops the Orient Express in its tracks. The luxurious train is surprisingly full for the time of the year, but by the morning it is one passenger fewer. An American tycoon lies dead in his compartment, stabbed a dozen times, his door locked from the inside.

Isolated and with a killer in their midst, detective Hercule Poirot must identify the murderer – in case he or she decides to strike again.

“Nothing short of swell. [Christie] is probably the best suspicion scatterer and diverter in the business.” (New York Herald Tribune)

“Agatha Christie’s books are both wonderful crime novels and studies in contrast and duality, and I adore them still. Underestimate them at your peril.” (Louise Penny, #1 New York Times-bestselling author of the Inspector Gamache novels)

“Agatha Christie taught me many important lessons about the inner workings of the mystery novel before it ever occurred to me that I might one day be writing mysteries myself.” (Sue Grafton, #1 New York Times-bestselling author of the Kinsey Millhone novels)

“Any mystery writer who wants to learn how to plot should spend a few days reading Agatha Christie. She’ll show you everything you want to know.” (Donna Leon, New York Times-bestselling author of the Commissario Brunetti novels) --此文字指其他 kindle_edition 版本。

Agatha Christie is the most widely published author of all time, outsold only by the Bible and Shakespeare. Her books have sold more than a billion copies in English and another billion in a hundred foreign languages. She died in 1976.