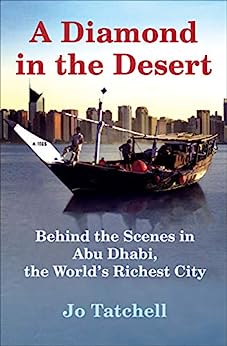 A Diamond in the Desert: Behind the Scenes in Abu Dhabi, the World's Richest City (English Edition) Kindle电子书

Jo Tatchell first arrived in the city of Abu Dhabi as a child in 1974, when the discovery of oil was quickly turning a small fishing town into a growing international community. Decades later, this Middle Eastern capital is a dizzying metropolis of ten-lane highways and overlapping languages, and its riches and emphasis on cultural development have thrust it into the international spotlight.

Here, Tatchell returns to Abu Dhabi and explores the city and its contradictions: It is a tolerant melting-pot of cultures and faiths, but only a tiny percentage of its native residents are deemed eligible to vote by the ruling class, and the nation’s president holds absolute veto power over his advisory boards and councils. The Emirates boast one of the world’s highest GDP per capita, but the wealth inequality in its cities is staggering. Abu Dhabi’s royal family, worth an estimated $500 billion, lives off the sweat of the city’s migrant workers, who subject themselves to danger and poverty under barely observed labor laws. But now, the city is making an international splash with a showy investment in tourism, arts, and culture—perhaps signaling a change to a more open, tolerant state.

As this sparkling city surges into the future, it devotes just as much energy to concealing its past. Tatchell looks not only at history and social issues—the ancient system of tribal organization, the condition of the city’s million foreign workers, the emergence of women in Emirati society, but also her own experiences as both a child and adult in this fascinating city that has radically changed—and in other ways, stayed the same.
阅读更多
›  查看更多商品促销信息

A welcome addition to the short list of books on Abu Dhabi...Engagingly written and sympathetic (
Guardian)

This is a place we need to know more about, and Tatchell here provides a smart, well-informed and flavorsome guide...the best thing I've read on the Gulf Coast boom town to date...it leaves you feeling you have come to grips with the realities of a land steeped in fable. The contradictions of its Islamic culture emerge starkly. (George Walden, Bloomberg News) --此文字指其他 kindle_edition 版本。

Jo Tatchell is a journalist who writes on Middle Eastern culture for UK and US media including the Guardian. Her first book, NABEEL'S SONG, was published by Sceptre in 2006 and was shortlisted for the Costa Biography Award. --此文字指其他 kindle_edition 版本。

Elisabeth Khan
4.0 颗星，最多 5 颗星 Enjoyable and informative read
2016年5月16日 - 已在美国亚马逊上发表
已确认购买
In the timeline of Abu Dhabi history, this book is a follow-up to M.A. Fahim's excellent eyewitness account, "From Rags to Riches."
Author Jo Tatchell revisits the country where she had arrived as a child in 1974 and spent her formative years. She is in an excellent place to compare the "then" and the "now" (meaning circa 2008), having absorbed a lot of fascinating information about the early days of the oil boom from her father, who managed Spinneys, the first supermarket catering to expats. She meets with some prominent locals and old-timers who have made the capital their permanent home; they are happy to reminisce. Her efforts at gaining access to old newspapers in the National Archives, however, are somewhat less successful (partly due to the digitization process which is underway).

Jo Tatchell is an excellent writer and I really enjoyed the book. Her observations are spot on and her background information appears well researched and quite accurate. Part memoir and part travelogue, with a bit of history thrown in, the book sometimes left me hungry for "more," which is a compliment as well as a complaint.

In the years since the book came out (2009) a lot has happened in the United Arab Emirates. There was the global economic crisis, which hit the country late, but hard, followed by an ongoing recovery. The emirate of Abu Dhabi has proven itself to be smart and resilient in the face of this adversity, opting to become the cultural capital of the area. Here's room for a sequel.
阅读更多
4 个人发现此评论有用

Kindle Customer
4.0 颗星，最多 5 颗星 Lots of interesting facts
2020年12月30日 - 已在美国亚马逊上发表
已确认购买
The book is well written and researched. This 2009 edition is 11years old. It will be extremely interesting to read an updated edition covering the accomplishments and changes attained since it's publication.
阅读更多

Violet P.
5.0 颗星，最多 5 颗星 What a gem
2013年7月16日 - 已在美国亚马逊上发表
已确认购买
I wish more people would write books like this about other parts of the world. I liked this book because it went from story to story to explain the history of Abu Dhabi. Reading it was like listening to a friend talk about their travels. The books includes a mystery, tragedy and quirky cultural perspectives.
阅读更多
4 个人发现此评论有用

Tom Groenfeldt
4.0 颗星，最多 5 颗星 Good background on Abu Dhabi
2013年5月31日 - 已在美国亚马逊上发表
已确认购买
Jo Tatchell lived there for a few years and then returned to look it over and write about it. A good view of the surface and what lies beneath in at least a few cases -- so you get a sense of the contradictions as well as the norms of everyday life.
阅读更多
2 个人发现此评论有用

Amazon Customer
3.0 颗星，最多 5 颗星 It's More History and less story.
2015年6月13日 - 已在美国亚马逊上发表
已确认购买
I did learn a bit about the United Arab Emirates when I read this book, but it seemed to move slowly and gave too much unimportant information.
阅读更多