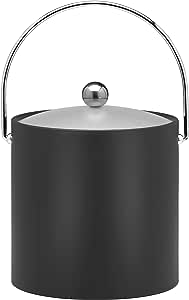 K. M. Krieger
4.0 颗星，最多 5 颗星 Nicely-made item, great color - but it's not for pool-side use...
2017年6月3日 - 已在美国亚马逊上发表
已确认购买
I gave this 4 stars even though it's not what I had thought it would be, BUT, it's actually a pretty nice tray all in all, and I can't fault the product because I misunderstood the description and reviews.
I'm unclear what the description means by "outdoor entertaining", but it apparently does not mean "poolside use". I had thought I could use this on the coping at the edge of the pool to provide a steady, flat surface for sodas and drinks. It's not made to withstand that situation, though. The stone and grout of the coping would wear through the bottom materials too quickly, and since there is a seam between the rim and the inside, water splashes would seep in. I'm also not confident that the vinyl ((which is not all that thick)) would stand up to pool water.
If it's going to be used up on side tables or other finished surfaces, it'd be fine.
The color is pretty much as shown, accounting for the differences in computer monitors - the blue is very clear and even, a bit bright but not "neon"-bright, just cheerfully bright ;) The vinyl wraps partway around the bottom, which is covered with a black leather-textured material which I assume is also vinyl. The edges are very 'clean' - tight and even. The inside of the rim is somewhat padded, as other reviewers have noted. It is also surprisingly heavy, also as noted by others, which I assume is to make it both easier to balance, and more difficult to tip over, when it's full of glasses and cups and so on. Whatever the core material is (?wood?), it is hard and absolutely FLAT, no uneven spots whatsoever.
I gave it 4 stars rather than 5 because it really does not seem to be for pool-side use, so I'm not yet sure how I'm going to use it - but I did decide to not return it, in part because I did get it through Amazon Warehouse Deals, and in part because it *is* a nice item so I will use it, just not in the way I had hoped.

French fashion lover
5.0 颗星，最多 5 颗星 Love this tray
2016年2月23日 - 已在美国亚马逊上发表
已确认购买
I have this tray in orange and use it every afternoon for my tea tray----it perfectly holds a teapot, cup and saucer, napkin and small plate or sugar bowl and creamer. It is lightweight very nicely designed, and, most importantly when you are walking up or down stairs with it, nonslip. Metal, wood, or plastic trays can't compete---items slip all over those while you carry it, but stay put on this tray, which has a leatherlike vinyl surface which does not look cheap. I loved the orange one so much that I bought it in ivory, a neutral with which I use my colored cups or plates. I highly recommend this tray.
阅读更多
6 个人发现此评论有用

60gram
5.0 颗星，最多 5 颗星 Kraftware trays perfect for TV dining
2013年8月2日 - 已在美国亚马逊上发表
已确认购买
My husband loves to eat with a tray in front of TV sports. When his old tray began to warp, he was doing a balancing act trying to keep from spilling things. He wanted on just like it. Right, in an age of cheap and junky material, where to find a heavy duty non-slip tray that would hold a dinner plate. I was so pleased to find the Krafware 14-inch tray on Amazon. It was the perfect size, very substantial material, wipe clean. The great color choices allowed me to coordinate with my kitchen decor as well. I would definitely recommend these trays to anyone who likes to eat in front of the TV, or carry food to their deck.
阅读更多
7 个人发现此评论有用
加入亚马逊Prime，从此免运费
亚马逊Prime会员可享海外购美/英/日/德跨境免邮，全年无限次！更有免费无限次阅读电子书服务
> 立即加入
了解我们
合作信息
帮助中心和购物指南