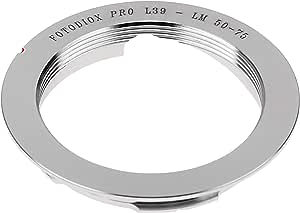 JBA
4.0 颗星，最多 5 颗星 Very good adapter. Probably the best you can get for the price.
2016年1月17日 - 已在美国亚马逊上发表
已确认购买
For starters, this adapter does what it's supposed to do. It's seems well made and is nicely finished, with no sharp edges or rough spots. It screws on to the lens smoothly, and mounts perfectly on my M3 and M9 bodies. When mounting it on the camera body, it rotates into place fairly smoothly (not as smooth as my Leica M lenses, but that's to be expected) and locks into place with no play. It's equally easy to remove. My initial test shows that the lens focuses correctly, so I think this adapter is a winner.

I deducted one star because although the adapter works well, the tolerances aren't quite as good as they could be for an adapter marketed as "Premium Grade" with "Top Notch Craftsmanship". That's not to say this is a bad adapter, it isn't at all, but judging it against its own marketing I can't quite rate it as perfect. I compared this adapter to an older Leitz Wetzlar adapter and a generic Japanese-made adapter I bought in Japan a few years ago for slightly more than the price of the Fotodiox. The key dimension with regard to focus is the thickness of the flange. All three have an average thickness of 0.0400" with some variation at different points around the ring. The Leitz had a variation of +/- 0.0003" and the Fotodiox had a variation of +/- 0.0005". Much to my surprise, the Japanese adapter beat both of them with a variation of +/- 0.0001", despite having a lower level of finish than the other two (sharp edges, light machining marks, no red indexing notch). The other point worth noting is that the Leitz adapter is the worst of the three in terms of mounting on the camera. It fits extremely tight on my M3 and M9, and can't even lock into place on the M9 without more force than I'm willing to exert on it. So the Japanese adapter, despite its slightly inferior finish, sets the bar. I would rate the Fotodiox above my particular Letiz adapter because of the fit issues, but it's possible the lugs on that adapter are just out of spec.

Given the inherent lack of precision in rangefinder focusing and the other potential sources of error, I suspect all three of the adapters are well within the tolerances of the system. That said, the Japanese adapter proves it's possible to make a significantly more precise adapter for not much more money, so I can't quite rate the Fotodiox as a full five stars if judged by its own marketing.

Nick Carrigan
5.0 颗星，最多 5 颗星 Works great for the Jupiter-8
2017年10月12日 - 已在美国亚马逊上发表
已确认购买
Seems to work really well with the used Jupiter-8 M39 lens that I picked up. Mates to the Leica M very well. It's a little tricky to get the lens off with the adapter but as long as you're careful it's not that hard. With the adapter I had no trouble with the focusing on the M240P.
阅读更多
1 个人发现此评论有用