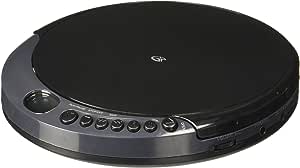 GPX's PC101B Portable CD Player offers all the standard playback features you would expect, including play, pause, skip forward/back, program, mode and stop. The LCD display shows you which track number is playing, so you can easily skip songs if desired. With digital volume control and a stereo headphone jack, the PC101B is perfect for taking to the beach, study hall, home or work. A low battery indicator shows you when the 2 AA batteries (sold separately) need to be changed, making sure your music listening is not interrupted. It can also run on external power adaptor (sold separately). So you can get started listening right away, one set of stereo earbuds are included in the package with the CD player. For more than 30 years, GPX has offered one of the broadest portfolios of technology-driven consumer audio and video products. An award-winning consumer electronics company, GPX has built a solid reputation on excellent product quality, reliability, design, and affordability.

James J.
1.0 颗星，最多 5 颗星 Nightmare!!
2017年10月5日 - 已在美国亚马逊上发表
已确认购买
This is a horrid product! I spent half a day on the phone regarding this CD player! I wish I had spent a little more to buy a decent alternative.

I have numerous books on CD. I purchased two units, one for my son and one for myself. We gave my son his on his birthday. Though he was excited initially, he stopped using it the first day! Because it was a gift, he did not want to sound ungrateful and complain about it. When I pressed him about why he was not using it, he commented that it was hard to complete a full chapter.

Months later, I opened the package of my CD player. The first day, I understood that the unit was poorly designed! I would listen to half or three quarters of a chapter and suddenly the unit stopped playing. I needed to eject the CD and restart the chapter. When I tried to advance to try to relocate my place in the book, the unit shut off even more quickly! Thus, I found it easier to listen to the same chapter from the beginning. One time, I listened to the chapter half a dozen times because I wondered if I accidentally pushed a button on the unit. The same thing occurred even when the player was stationary. I finally inserted the CD in my home stereo system unit to finish the book.

My older sons had CD players that they listened to all the time. I never recall them experiencing any of these frustrations.

Unfortunately, I discovered the problem too late because I neglected to use my unit before the time to send it back to Amazon expired. I thought that everything would be fine because I purchased the Extended Warranty. That was my second mistake! It took me hours of chatting with Square Trade to learn that the first year, the CD player is under the manufacturer's warranty.

My advise...Spend a little extra on a better unit.

Jaxterp
2.0 颗星，最多 5 颗星 Cheap
2017年5月11日 - 已在美国亚马逊上发表
已确认购买
Remember the 80s when "Walkmans" were popular? Well, how did portable CD players ever work while we were walking, or did they? This portable CD player was cheap in price so overall it was worth it, if you want to play a CD and keep the portable player on a very still surface and don't touch it while listening. Fortunately I did buy it to listen to a meditation CD so I am not moving at all when I use it. It would not be practical to actually listen to music or an exercise CD because every little bump will mess it up. The headphones that come with it are a very hard plastic so not comfortable and after all I am trying to relax when I listen to my CD, but it fits any standard headphones. It does not come with a power cord and using batteries, even when I put the high efficiency strongest batteries in it, I could not get through 2 evenings without them being drained. I ended up purchasing the power cord, which cost as much as the CD player itself so I could use this without buying new batteries every other day. Overall if you know what you are getting, and you are getting what you pay for here, it can be a decent product depending on your needs.
阅读更多
13 个人发现此评论有用

KMS
1.0 颗星，最多 5 颗星 Garbage
2017年3月30日 - 已在美国亚马逊上发表
已确认购买
This CD player is a piece of garbage. It won't play a single CD without skipping terribly. Somehow it burned through two new batteries in just a couple of hours and, as you might expect with a product this cheap, the sound quality is pretty bad.
阅读更多
14 个人发现此评论有用

BBC Fan
1.0 颗星，最多 5 颗星 Buyer beware!
2017年3月19日 - 已在美国亚马逊上发表
已确认购买
Product not returnable, but Amazon replaces. Some work, some don't. They burn through batteries at a budget-busting rate-which is my chief complaint. It does skip/pause easily. As an inexpensive replacement to play audiobooks in bed it's fine. As technology past its time, it'll do. I have a lot of books to convert to MP-3 or something!
阅读更多
11 个人发现此评论有用

Chris
3.0 颗星，最多 5 颗星 High pitched ringing noise from player
2017年1月10日 - 已在美国亚马逊上发表
已确认购买
I would not buy again. It was inexpensive and it plays CDs that are scratched that my old player couldn't read so for that it gets three stars. The downsides are that it makes an audible high pitched ringing noise that can be heard from the player itself and through the headphones. The ringing does not get louder as the volume is turned up. if you plan to use it in a loud place this probably wouldn't be a big issue but its quite annoying in a quiet setting. Last downside is it uses batteries up far more quickly than my previous player. I only have one to compare with so I'm not sure if my old one was really good for batteries or if this one is poor.
阅读更多
6 个人发现此评论有用
加入亚马逊Prime，从此免运费
亚马逊Prime会员可享海外购美/英/日/德跨境免邮，全年无限次！更有免费无限次阅读电子书服务
> 立即加入
了解我们
合作信息
帮助中心和购物指南