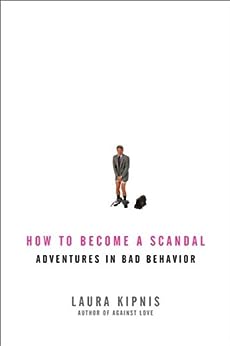 How to Become a Scandal: Adventures in Bad Behavior (English Edition) Kindle电子书

L.C. Evans
4.0 颗星，最多 5 颗星 What Were They Thinking?
2010年7月2日 - 已在美国亚马逊上发表
免费商品的 Vine 买家评论( 这是什么？ )
Author Laura Kipnis examines four famous scandals from the perspective of the public and then tries to explain from a psychological vantage point what might have led the perpetrators to act as they did. Except for the case of Linda Tripp, who set herself up for a big fall by backstabbing her best friend Monica Lewinsky, it really is difficult to understand what motivated the others to turn themselves into poster children for bad behavior. Linda Tripp came from a troubled background and had a reputation around the office for being a backstabber and a gossip. When she went public with Lewinsky's story, she never expected to be turned on by the public. The author does a good job delving into Tripp's past and using psychology to give the reader a good grasp on what might have caused her lapse in judgment. With the case of the astronaut caught in a love triangle and the case of Judge Wachtler, who committed felonies after a disastrous love affair, the explanations are more speculative. In these, I felt that Ms. Kipnis was repetitious and, especially in the Wachtler case, tried too hard to dissect the judge in psychological terms. In fact, of the four cases, I thought she came down too hard on Judge Wachtler, who may have been suffering from a genuine mental illness exacerbated by the use of a medication known to cause bizarre behavior. And bizarre behavior it was--including impersonating a sleazy detective and threatening to kidnap his ex lover's child. This from a supposedly brilliant man, who was a respected judge? In the final case study, that of author James Frey, who caused a scandal after he wrote a fake memoir that got him on Oprah, Ms. Kipnis makes the valid point that Frey did what every memoirist does--embellish the truth. His crime was that Oprah got egg on her face for taking his entire book as truth. Kipnis then goes on to make an interesting comparison between Frey's literary excesses and Oprah's weight problems, both held out for the public to see their humiliation.

Overall, an interesting book. As Ms. Kipnis said, we are fascinated by scandal. In the end I came away with the sobering thought that none of us are immune to getting involved in scandalous behavior under certain circumstances.
阅读更多

jjmachshev
3.0 颗星，最多 5 颗星 How To Become A Scandal by Laura Kipnis
2010年10月30日 - 已在美国亚马逊上发表
免费商品的 Vine 买家评论( 这是什么？ )
Who doesn't love a juicy scandal? Yet however loudly we decry the bad behavior, isn't it just a tad hypocritical that we also gain a bit of enjoyment from it? Laura Kipnis' latest book, "How To Become A Scandal - Adventures in Bad Behavior", puts both sides of the issue under her social microscope and digs into the whys and wherefores of the issue.

I think it was Oscar Wilde who said, "Scandal is gossip made tedious by morality" -- and that's pretty much the sum of this book in a nutshell; yet stated with a little less candor. While I agree with many of the author's points made in this book, I didn't necessarily enjoy the subtle, yet frank glee she seemed to exhibit writing about her subjects.

In each of the four scandals, Kipnis focused her lens on one participant as follows: The Lovelorn Astronaut - Lisa Nowak; An Unreasonable Judge - Sol Wachtler; The Whistle-Blower - Linda Tripp; An Over-imaginative Writer - James Frey.

Informative? I guess. I learned a lot more about the scandals than I really wanted to know...to the point of almost beginning to pity these now infamous characters. Engaging? If you love to read the scandal pages, then you'll likely enjoy this book. Enjoyable? Not so much for me. I finished the book not quite sure what, if anything, the author was aiming to accomplish. Just to rehash the scandals? Reinforce the whole "There but for the Grace of God..." aspect of scandals?

Maybe there are some folks who have never considered WHY they enjoy reading about scandalous behavior. If so, they might learn from this book. Otherwise? I repeat--If you like to read about scandals and didn't get all the information regarding one of the above named examples, feel free to read the book. Or you could just Google it.
阅读更多