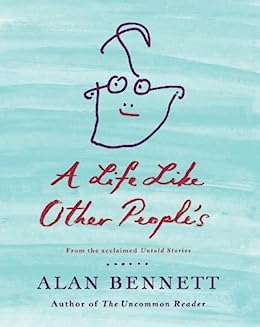 FROM ONE OF BRITAIN'S GREATEST LIVING WRITERS AND THE AUTHOR OF THE UNCOMMON READER, A FAMILY MEMOIR AND UNIQUE WORK OF ART—A LIFE LIKE OTHER IS ALAN BENNETT AT HIS BEST

In this poignant memoir of his parents' marriage, Alan Bennett recalls the lost world of his childhood and the lives, loves, and deaths of his unforgettable aunties, Kathleen and Myra. First published in the acclaimed collection Untold Stories, this tender, intimate family portrait beautifully captures the Bennetts' hopes, disappointments, and yearning for a life like other people's. With the sudden descent of his mother into depression, and later dementia, Bennett uncovers a long-held family secret in this extraordinarily moving and at times irresistibly funny work of autobiography.

"Fans of Bennett know what to expect—bracingly good prose, a well-seeded laugh here and there and much food for thought."
--Kirkus Reviews
--此文字指其他 kindle_edition 版本。

Alan Bennett has been one of our leading dramatists since the success of Beyond the Fringe in the 1960s. His television series Talking Heads has become a modern-day classic, as have many of his works for stage and screen. His collection of prose, Untold Stories, won the PEN/Ackerley Prize for autobiography, 2006. --此文字指 hardcover 版本。
阅读更多

Sam Pen
4.0 颗星，最多 5 颗星 A dark tale of family life
2012年9月7日 - 已在美国亚马逊上发表
已确认购买
I found the book a rather dark tale of family life. Not sure if the title is really appropriate, or perhaps it is. My family, too, had it's dark moments, but I am not sure if I could sit down and write a whole book about them the way Alan Bennet did. Within his family there was mental illness, suicide and anti-social behaviour (shyness). Even though the story was dark, it was well written and an insight into the workings of Alan's family from a realistic point of view. He needs credit for being able to sit down and write such an honest, well written account of his family.
阅读更多
1 个人发现此评论有用

Kathy Perutz
3.0 颗星，最多 5 颗星 Not my favorite Alan Bennet
2017年6月17日 - 已在美国亚马逊上发表
已确认购买
I love Alan Bennett and therefore wws interested in learning about his childhood and upbringing. But there's a snarky tone to this memoir I don't like. His lack of generosity towards his aunts, which may well be justified, is never gone into and so remains simply mean-minded.
阅读更多