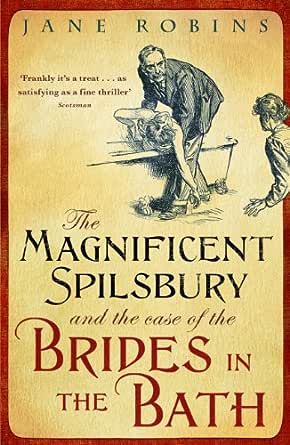 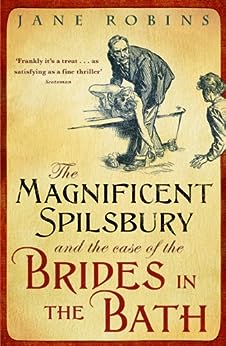 Jane Robins is a distinguished writer and journalist. Her first book, Rebel Queen was a critically acclaimed account of the trial for adultery of Caroline of Brunswick by her husband, King George IV. --此文字指其他 kindle_edition 版本。

'A riveting and beautifully written book. A high point in the annals of murder, for every necessary ingredient - callousness, ruthlessness, mystery, recklessness, boarding houses, detection, a chase, money, sex and even a bit of glamour - is present. Miss Robins has made a thumping good book out of it'. (Daily Telegraph)

'In Jane Robins' excellent The Magnificent Spilsbury - part-whodunit thriller, part-social history, part-biography - there's delight in the detail.. This is a pacy page-turner underpinned by meticulous primary source research. Frankly, it's a treat.. as satisfying as a fine thriller'. (The Scotsman)

'Robins's description of the murders and of Smith's persuasive personality is gripping. The Magnificent Spilsbury teems with promise'. (Sunday Times)

'As well as being a gripping, pacy account of a gruesome murder trial, this book is also a compelling piece of social history. An author tackling a story like this has to fight hard to avoid tipping into prurience and ghoulishness. Robins wins the fight, and shines a light on a dark age for women'. (Independent on Sunday)

'Not just a compelling read but it also an intriguing slice of social history'. (The Express)

'An author tackling a story like this has to fight hard to avoid tipping into prurience and ghoulishness. Robins wins the fight, and shines a light on a dark age for women.' (Independent on Sunday)

'With the precision of her main character, Jane Robins examines these murders...Robins is excellent at setting this story in its historical context' (Sunday Telegraph)

'Like its hero, The Magnificent Spilsbury teems with promise ...' (Culture)

'The Brides in the Bath and the rise of Spilsbury as the father of modern forensics are both well-worn tales, but Jane Robins has convincingly succeed in reworking them into a cracking good read. It is a deceptively delicate task to examine trial transcripts, police depositions, letters and newspaper accounts and reforge them with such admirable immediacy...Robins should prepare herself for a summer bestseller' (The Daily Telegraph)

Outstanding. The book is about a pre-war conman who drowned his wives in the bath. It made my jaw drop (Kate Kellaway, Observer) --此文字指其他 kindle_edition 版本。

sb-lynn
4.0 颗星，最多 5 颗星 The Brides in the Bath case and Bernard Spilsbury, the first famous forensic examiner
2013年9月1日 - 已在美国亚马逊上发表
已确认购买
This fascinating true-crime book is about the infamous Brides in the Bath trial in England during the early days of WWI and the rise and success of Bernard Spilsbury, considered the first and most influential forensic examiner and star expert witness.

The Brides in the Bath case had to to with a man named George Joseph Smith, who was accused of the murder of three women in the early 1900's. Shortly (and I mean shortly) after marrying Bessie Mundy, Alie Burnham and Margaret Lofty, their bodies were found (by him) dead in their bath. George would take on new identities for the purposes of his criminal pursuits and an interesting part of this book is showing how the police figured out it was him and put their case together.

In alternate chapters we get the story of Bernard Spilsbury, a forensic examiner. This was the early days of what is the equivalent of "CSI" today and the Sherlock Holmes stories were well known and at the height of their popularity. The public was eager to learn about forensics and they were first becoming useful in criminal prosecutions. We read how Spilsbury first came to prominence in the famous trial of Dr. Crippen in 1910, accused of killing his wife. It was through Spilsbury's testimony identifying human remains as that of Dr. Crippen's murdered wife that the prosecution was able to get a conviction. The court had told the jury that if they did not believe the remains were those of Mrs. Crippen's then they had to acquit - so his testimony was crucial.

One of the things that is so interesting about this book is that it is a real look at the birth of modern CSI and how important it is to our criminal justice system. In fact some of Spilsbury's conclusions and testimony from the Brides in the Bath case are shown as just plain wrong today, but it was still the beginning of the search for truth by way of scientific investigation and methods.

The story is also told with the backdrop of WWI - so not only do we learn a lot about the important criminal cases of the time and about the well-known prosecutors, defense attorneys and expert witnesses; we also get a real feel for what life was like at that time. Some fun facts - you have a headache? The doctor would likely give you pills made of "acetanilide, caffeine and heroin." Plus, when someone is sentenced to hang, they often went to the gallows within a month or two. Not the appellate process we have today so the importance of expert witnesses getting things right becomes even more crucial because the review was so brief.

My only critique is that I thought there were a couple of slow-bits in the book, but I wouldn't want to deter anyone from reading this really informative and wonderful book. You'll learn a lot and you'll be entertained in the process.

Rob Hardy
5.0 颗星，最多 5 颗星 CSI a Hundred Years Ago
2013年8月1日 - 已在美国亚马逊上发表
已确认购买
Newspaper readers in England in the 1920s were familiar with the headline, "Spilsbury Called In." It meant that there was a murder mystery and the top medical investigator was on the job. Bernard Spilsbury is forgotten now, but he had a spectacular career. The story of one of the most gruesome series of crimes Dr. Spilsbury ever researched is told in _The Magnificent Spilsbury and the Case of the Brides in the Bath_ (John Murray) by Jane Robins. Spilsbury is, however, mostly a supporting character in this story, although his evidence did secure a verdict of murder. Robins has not only told the story of the crimes and Spilsbury's involvement in their solution, but has told much about the relationship between the sexes at the time, the women's suffrage movement, the social changes within the First World War, and much more. She has dug through research in the National Archives, Spilsbury's original notes, and the reports of the press at the time. The resolution of the case will not be a surprise; as Robins tells the story of serial killings, the murderer's guilt is obvious. There are, however, some reflections on Spilsbury's methods at the end that do provide a surprise and much to think about.

George Joseph Smith took three victims; Bessie Munday who died in 1912, Alice Burnham in 1913, and Margaret Lofty in 1915. Smith's pattern in the marriages was similar. He would approach the woman who would otherwise not attract a man's attention due to her plainness or age, he would marry her, make sure she made a will, see that she had been to the doctor for some sort of complaint recently, and arrange to be ostensibly out of the house when the woman drowned in the bathtub. The father of one of the victims realized similarities when the third woman died, and alerted police. Spilsbury was called. His initial star turn came with the 1910 trial of the infamous Dr. Crippen, buried within whose cellar was found the decomposing body identified as his wife. Spilsbury had identified a scar line on a patch of decomposing skin that correlated with a previous operation. Called into the Smith case, he exhumed the bodies of the three victims, finding no evidence of prior illness or poisoning. He enlisted the help of a "very fine lady swimmer," and did experiments in baths similar to the ones in which Smith's victims had died. He was to testify at the Old Bailey in Smith's trial in 1915 and to carry the day, giving testimony about the physical positioning of the bodies and about a peculiar finding of something called "goose flesh" found in cases of sudden death, in particular sudden death from drowning. Spilsbury was a splendid witness, and won the praise of the public and of the medical establishment of the time. His confidence and assertiveness of pathological facts also won the case, and doomed Smith, who went to the hangman protesting that he was innocent.

Spilsbury was compared in his time to Sherlock Holmes, and can be held to be the founding archetype of medical forensics and of the expert medical witness. Time, though, has not been kind to him. "Goose flesh" is "now regarded as so much nonsense," for instance, and even the tissue on which he memorably found the scar of Mrs. Crippen has been determined to be from someone else. Spilsbury presented the best science of his time (and incidentally, it is hard to see how all those brides could have died other than at Smith's murderous hands), and that was sufficient. Robins concludes that "... courts are still faced with the problem of the changing nature of science and, its close relative, the need to distinguish good science from bad." Her detailed account of horrifying crimes helps explain how this important line of thought started.
阅读更多

N. Hannah
5.0 颗星，最多 5 颗星 How the "who done it" done it!.
2019年8月2日 - 已在美国亚马逊上发表
已确认购买
Interesting read about con artist and serial murderer George Joseph Smith and how Bernard Spilsbury, known as the father of forensic pathology, was able to solve Smith's method of killing by drowning. A very interesting historical read!
阅读更多

LesleyG
5.0 颗星，最多 5 颗星 Super
2014年3月17日 - 已在美国亚马逊上发表
已确认购买
I saw the play "Tryst" and loved it so much I had to purchase the book on which the play was based. The book is written with a lot of forensic and legal facts which is great if you are a fan of those things (which I am). However, if you have a chance to see the play, do so, then buy the book.
阅读更多