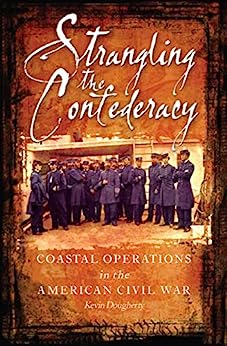 A selection of the Military Book Club.

While the Civil War is mainly remembered for epic land battles, the Union waged an equally important campaign at sea—dubbed “Anaconda”—to gradually deprive the South of industry, commerce, and resources. The Rebels responded with fast ships called blockade runners that tried to evade the Yankee fleets, while at the same time constructing fortifications that could protect the ports themselves. Ultimately, it was this coastal conflict that brought the Confederacy to its knees.

In Strangling the Confederacy, historian and Citadel tactical officer Kevin Dougherty examines the Union’s naval actions from Virginia down the Atlantic Coast and through the Gulf of Mexico. The Union’s Navy Board leveraged superior technology, including steam power and rifled artillery, in ways that rendered the Confederate coastal defenses nearly obsolete. But when the Union encountered Confederate resistance at close quarters, the tables were turned—as in the failures at Fort Fisher, the debacle at Battery Wagner, the Battle of Olustee, and in other clashes.

Offering a unique perspective, Dougherty concludes that, without knowing it, the Navy Board did an excellent job at following modern military doctrine. While the multitude of small battles that flared along the Rebel coast have been overshadowed by the more titanic inland battles, in a cumulative sense, Anaconda—the most prolonged of the Union campaigns—spelled doom for the Confederacy.
阅读更多
Previous page
Next page
›  查看更多商品促销信息

... displays evidence of scholarly research and is supported by half-a-dozen quite useful maps ... * Military Illustrated * Strangling the Confederacy is an excellent short history of the blockade... highly recommended. * Civil War News * General readers interested in the US Civil War will find this book a useful entry into a complex subject. Scholars and students who need access to a good survey of academic literature on military operations along the Atlantic and Gulf coasts may also find the work useful. Recommended. * Choice Magazine * a volume to inspire the naval modeller to look at subjects away from Napoleonic galleons and 20th Century behemoths. Well researched, accurate and easy to follow, it is recommended to naval modellers, wargamers and historians alike. * www.scaleplasticandrail.com *

Kevin Dougherty is a retired U.S. Army lieutenant colonel. Formerly a faculty member in the History Department at the University of Southern Mississippi, he is currently a Tactical Officer at Citadel in Charleston, South Carolina.

James A. Moore
3.0 颗星，最多 5 颗星 Not much here
2018年1月16日 - 已在美国亚马逊上发表
已确认购买
Very basic overview. There are a few gaps concerning the Burnside Expedition. Decent enough but the information I needed to write a book wouldn't have come from this little bit of information.
阅读更多
1 个人发现此评论有用

Eric Calistri
3.0 颗星，最多 5 颗星 OK as an introduction. Brief, Concise, uses Secondary Sources
2017年4月24日 - 已在美国亚马逊上发表
I picked this one up for $5. It's worth that. But I have mixed feelings overall. It's a fairly brief (less than 2oo pages of text) but still manages to give a decent, introductory level overview of the Navy Board, and the coastal operations undertaken by the Union. Very few primary sources are used, but the bibliography of secondary sources seems pretty good.

Dougherty does a nice job of tying these operations together, and showing how successful the Union over the period Sept 1861-May 1862. Of the 10 Major CS ports, they were down to 3 (Mobile, Charleston and Wilmington) early in 1862. The Union made little additional progress against CS ports until 1864.

The blockade was made as successful as it was by combined operations against ports and port defenses in a brief period time early in the war. And then little was done for over 2 years.

The book suffers from some organizational problems and repetition, particularly in the introduction and concluding chapter, but the meat of the book is organized and concise.

C. A. Temm
3.0 颗星，最多 5 颗星 A decent intro
2013年8月7日 - 已在美国亚马逊上发表
I bought this book on the assumption (yeah I know) that when the subtitle said coastal operations that it would go into detail about it. That assumption was wrong as what this book does is give a quick rundown on the MAJOR naval ops against Confederate ports plus a bit about the Peninsula Campaign and absolutely nothing outside of that. Nothing is mentioned of the hundreds of small raids, convoy duties, intelligence missions, counter guerrilla opns, refugee pickups etc that the Navy did throughout the War often causing the Confederacy untold grief while doing so.

For anyone with little to no idea of what the Union Navy brought to the fight or it's importance, this book does do a fair job of highlighting the major opns. It also discusses in some detail the personnel of the Navy Board in deciding both strategy and division of resources which IS something not touched on in many references. This was a first in US military history and may be understood as something akin to the Admiralty of the Royal Navy. This was a highly successful planning group and one the Army could have benefited from greatly, by emulating.

Until something better comes along then for a more detailed history of the Navy during the Civil War, I'll have to stick to Admiral David D Porter's huge "Naval History of the Civil War". Written from the winning side of the War, it lacks the balance of details from the Confederate side and sometimes overblows successes while minimizing failures but it's still the most encompassing of naval histories of the War.
阅读更多
2 个人发现此评论有用

James W. Durney
4.0 颗星，最多 5 颗星 An important area of the war
2011年3月3日 - 已在美国亚马逊上发表
War like anything else has a main ring and sideshows. The main ring is what people watch Durney the war and what historians write about afterward. For the American Civil War, the main ring is the Washington Richmond Theater. The battles between the Army of the Potomac and the Army of Northern Virginia consumed the nation. The personalities, the battles and the politics filled the papers and fill the history books. Only the Union Army of the Tennessee comes close to the coverage these two armies receive.
One of the most important but least reported or studied campaigns of the war are the costal operations conducted by the Union against the Confederacy. These operations were in support of the Naval Blockade and designed to secure facilities for the navy, restricting access to open water and capturing ports. The history of warfare was little help as steam altered the requirements of supply. Many established theories had to be tested and the magnificent forts, that took years to construct, were found wanting. A ships ability to steam independent of wind and tide, rifled guns, heaver shells and better optics rendered these forts obsolete. The costal campaigns are an important area for some army officers. Burnside develops a reputation that will give him an army but Butler's failure removes him from command. While mostly a Navy operation, landings are common although opposed landings are rare. Success required Army Navy cooperation that was not always possible and the clash of personalities could be very childish and petty.
This is a very well written overview of the major costal campaigns conducted during the war. The author has excellent knowledge of the subject coupled with an in-depth knowledge of military history and procedures. In addition, he can communicate this in an understandable and readable manner. Considered an introduction this book looks at the planning, problems of equipment, military thought, inter service rivalry and the personalities that made things work or made them fail. This is a tall order for a small book but the author does an excellent job. This book is an important addition to your library and your understanding of these campaigns.
阅读更多
1 个人发现此评论有用