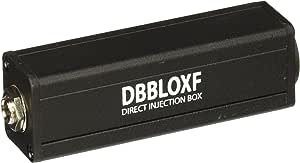 The Rapco Horizon DBBLOXF DI box provides a compact and affordable way to convert a low impedance signal to be converted to a 10k ohm signal compatible with guitar and bass amplifier inputs. The Rapco direct box features an XLR female input and a 1/4" male output.

Richard A Skelley JR
5.0 颗星，最多 5 颗星 Ultra Portable DI Connector
2018年11月13日 - 已在美国亚马逊上发表
已确认购买
I have one older wireless mic system with only line level out (1/4") and a system needing a low mic level input. Just be sure to order the correct configuration as it is input/output configured (directional). Does a perfect job without taking up a lot of space or adding much weight. I saw a sister product, the laptop DI with level control and was intrigued, so I looked further found this. A great find. Will be buying more in the near future.
阅读更多

RICHARD O.
5.0 颗星，最多 5 颗星 It works!
2019年5月13日 - 已在美国亚马逊上发表
已确认购买
I needed an extra DI box for guitars at my church, and decided to try this. It works well and is quite inexpensive. It didn’t say Rapco in it though, just some very looong name that doesn’t make any sense.
阅读更多
1 个人发现此评论有用

Jeffery L. Stockford
5.0 颗星，最多 5 颗星 Perfect to Have in Your Case
2019年4月28日 - 已在美国亚马逊上发表
已确认购买
Bought this because it is small enough to carry in my guitar case compartment. In case I need to plug in and don't have my gig bag and effects with me.
阅读更多
1 个人发现此评论有用

Sam Beckett
2.0 颗星，最多 5 颗星 the nice size, a decent implementation, but I had some quality issues/concerns
2013年11月28日 - 已在美国亚马逊上发表
已确认购买
I bought this as the smallest solution I could find to run keyboards into an input block that provided only XLRs.

I didn't want to have a stack of Whirlwind Directors (which I was using live, already had, and have been absolute rocks - but are big), I did not want to commit any of my new Radial DIs from my studio to this situation (I just didn't need that robust a feature set live). For this application, a rack DI (either the quad Whirlwind rack or the Radial solution (which I also have in my studio) was inappropriate and would've caused more trouble than the large individuals. I really wanted the smallest DI I could find and had good luck with RAPCO in the past as a utility players. I take care of my gear, so I figured even with modest build quality, I'd be ok. I was wrong.

(Regarding features) The live system in which I used the DBBLOX (I bought 4, one for each mono keyboard) is built around consistent balanced stage power, and everything is properly grounded, so I had no issue with the lack of a ground switch. Monitors are handled at the console and I have no amp on stage, so, I didn't need 1/4" thrus.

My issue with the DBBLOX is that after 2 years, only 1 out of 4 are "as purchased". 3/4 have needed repair. Two broke in the same spot (the XLR side, when unplugging/plugging a cable, broke and caused a disconnect to the transformer. The other, the innards just became loose requiring attention to prevent further breakage/damage. products with their components rattling around inside are, of course. a concern when you rely on them to get your instrument to the main PA. I have been able to fix them, but, it's still a bad design if 2 out of 4 have required surgery, and 1 was preventatively operated on. Even after repair, I have taken them out of service,

As mentioned at the top, I typically buy either proven rock solid live utility pieces or high end studio pieces, so this experiment was, I suppose, a failure, All DBBLOX have all been replaced by the Whirlwind DI's I already had. Even though their size still makes things cumbersome, I am confident that they will work on each gig.
阅读更多
7 个人发现此评论有用
加入亚马逊Prime，从此免运费
亚马逊Prime会员可享海外购美/英/日/德跨境免邮，全年无限次！更有免费无限次阅读电子书服务
> 立即加入
了解我们
合作信息
帮助中心和购物指南