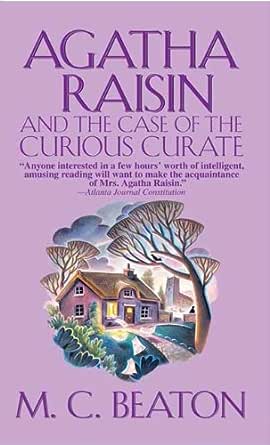 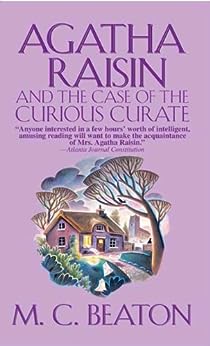 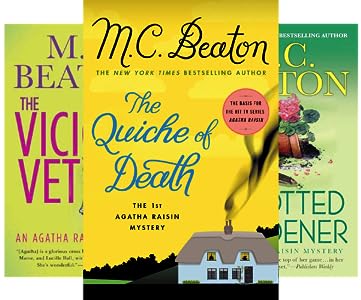 “Anyone interested in a few hours' worth of intelligent, amusing reading will want to make the acquaintance of Mrs. Agatha Raisin.” ―Atlanta Journal Constitution

“Beaton has a winner in the irrepressible, romance-hungry Agatha.” ―Chicago Sun-Times

“[Agatha] is a glorious cross between Miss Marple, Auntie Mame, and Lucille Ball, with a tad of pit bull tossed in. She's wonderful.” ―St. Petersburg Times

“The Raisin series brings the cozy tradition back to life. God bless the Queen!” ―Tulsa World

M.C. Beaton is the author of both the Agatha Raisin and Hamish Macbeth series, as well as numerous Regency romances. Her Agatha Raisin books are currently being turned into a TV series on Sky. She lives in Paris and in a Cotswold village that is very much like Agatha's beloved Carsely. --此文字指其他 kindle_edition 版本。
click to open popover

gotsol
4.0 颗星，最多 5 颗星 OK Aggie
2018年10月28日 - 已在美国亚马逊上发表
已确认购买
I think I need to take a break from reading Agatha Raisin as she is becoming more annoying than endearing. She absolutely does nothing to help herself which seems odd because we are supposed to believe she is an intelligent, intuitive, successful business woman. This book was an ok read but is totally formulaic. New guy moves in next door, Angela crushes on him, he gets scared by her attention, murder happens... It's actually getting to the point where I think the author just changes some names, tweaks the murder and wha laa a new book.
阅读更多
2 个人发现此评论有用

Michelle Boytim
4.0 颗星，最多 5 颗星 A cute curate causes trouble for Agatha
2015年6月2日 - 已在美国亚马逊上发表
已确认购买
The 13th book in the Agatha Raisin series has Agatha back in the Carsley. She is still somewhat depressed over James, but her friend Mrs. Bloxby hopes she will cheer up by meeting the new curate, who has all the village ladies fluttering, much to her husband, the vicar’s, dismay. Agatha is charmed by Tristan, and he invites her for a private dinner, using his charm to try to get into her bank account. When she puts him off as a financial advisor, he ends the dinner early and mocks her interest in him. When the curate ends up dead, stabbed in the vicar’s study, Mrs. Bloxby asks her friend to try to find out what happened and clear her husband. Agatha joins forces with her neighbor John, a mystery writer to find out who might be a suspect and dig into Tristan’s past. Agatha must negotiate potent wine, drunken Morris’ dancers, and a duck race, before she narrows down her list of suspects. But her inquisitiveness may end up getting her into a deadly situation.
阅读更多
4 个人发现此评论有用

Darlene Smith
5.0 颗星，最多 5 颗星 A curate who didn't work for God.
2017年2月16日 - 已在美国亚马逊上发表
已确认购买
Agatha discovers the handsome curate is a blackmailing cheat after he's murdered. Determined to clear her best friend's husband, she searches for the killer amongst the curate's victims, enlisting the help of her handsome neighbor. We get a glimpse of a caring Agatha in this one. An enjoyable read.
阅读更多
2 个人发现此评论有用

Carolyn S
5.0 颗星，最多 5 颗星 A satisfying time with Agatha
2017年4月12日 - 已在美国亚马逊上发表
已确认购买
This read and the whole Agatha Raisin series are "cozies". The pleasure lies in the characters and setting not in the plot so much. Agatha is complex and interesting and also amusing, In her work she is smart, in her personal life not so much. Her friends are interesting. The Cotswolds are the bomb. I love cozying up for an afternoon with an Agatha story.
阅读更多
1 个人发现此评论有用

PMcD
5.0 颗星，最多 5 颗星 A triumph! The very best of this series so far!
2003年3月8日 - 已在美国亚马逊上发表
已确认购买
This is a spectacular entry in M.C. Beaton's delightful series of "cozies" featuring the deliciously imperfect Agatha Raisin. Ms. Beaton has scored a huge hit with this entry, which is a truly excellent whodunit, with the emphasis on mystery rather than Agatha's love life. Regular readers who have been frustrated with the editorial errors in prior novels will be pleased to know this entry shows substantial improvements in editing as well.
Agatha returns from another public relations project in London to find her Cotswold village of Carsley agog over the arrival of a new curate, hired to help local vicar Alf Bloxby, husband of Agatha's good friend. Tristan Delon is a stunningly beautiful young man, with the face of a voluptuous angel and more than his share of charm. Carsley's church is packed when he begins delivering sermons. Of course, our Agatha is struck all of a heap by Tristan, in spite of Mrs. Bloxby's less than enthusiastic opinion of him. Agatha is naturally delighted when Tristan invites her to his lodgings for a sumptuous dinner, but is shrewd enough to refuse his offer to manage her stock portfolio.
Murder still seems to follow our Agatha, so it's not surprising the gorgeous new curate is found murdered the morning after her dinner with him. What is surprising is that he's found dead in the vicar's study, stabbed with the vicar's paper knife, with the church donation box nearby. This, of course, puts the Bloxbys under suspicion, and this time, it is Mrs. Bloxby who implores Agatha to investigate. Eager to clear the vicar, Agatha agrees and the fun begins.
Of course, the curate was not the angelic creature he appeared to be, but a spiteful, malicious creep who enjoyed befriending the wealthy and conning them out of money, then deserting them and trying to blackmail them. Those affected by his misdeeds are scattered between London and Carsely, and Agatha energetically tracks them all. Two villagers are murdered in quick succession, and Agatha fears gossip and suspicion will destroy not only the Bloxbys, but the friendly nature of her village as well.
The solution is delicious, the clues fairly placed, and, I must confess, I was actually surprised----a first for me! Many of Beaton's novels are light on mystery, but this entry does not short the reader in any way. Beaton continues the development of her characters and moves them through their lives and relationships in the same highly entertaining manner, while constructing a tighter, faster paced mystery than usual. I was impressed by the skill with which she briefly draws the personalities of the large number of suspects in this novel. Agatha is more professional here, and although her oddly endearing abrasiveness and insecurity remain, there is evidence of Agatha's continuing personal growth as well, particularly in her decision to begin an old folks' club in Carsely.
She is assisted in this case by new neighbor John Armitage, to whom she seems oddly unattracted, given his good looks. Of course, Agatha is finally returning to her tough, coarser exterior here, perhaps in reaction to learning her beloved ex-husband James Lacey did not in fact join the monastery for which he supposedly divorced her. Adorable detective constable Bill Wong is present as usual, concerned for Agatha's safety and still having girlfriend trouble. Neither Agatha's former office boy Roy Silver nor fickle baronet Sir Charles Fraith appear in this novel, as both are occupied elsewhere. So, readers will evidently have to wait to see if Charles escapes his disastrous marriage and loses his recently acquired avoirdupois. Fans will also eagerly await the next installment to see if the next handsome new neighbor moving into the cottage next door formerly occupied by James Lacey and John Armitage will catch Agatha's eye! As usual, I can't wait for the next installment in this series!!