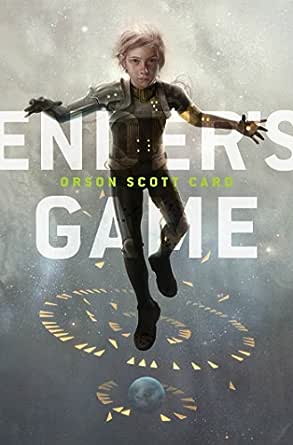 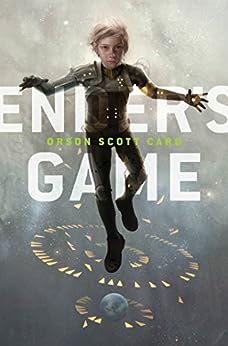 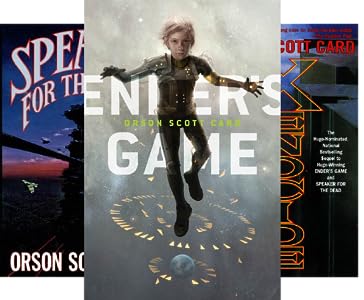 “I’ve watched through his eyes, I’ve listened through his ears, and I tell you he’s the one. Or at least as close as we’re going to get.”
“That’s what you said about the brother.”
“The brother tested out impossible. For other reasons. Nothing to do with his ability.”
“Same with the sister. And there are doubts about him. He’s too malleable. Too willing to submerge himself in someone else’s will.”
“Not if the other person is his enemy.”
“So what do we do? Surround him with enemies all the time?”
“If we have to.”
“I thought you said you liked this kid.”
“If the buggers get him, they’ll make me look like his favorite uncle.”
“All right. We’re saving the world, after all. Take him.”

The monitor lady smiled very nicely and tousled his hair and said, “Andrew, I suppose by now you’re just absolutely sick of having that horrid monitor. Well, I have good news for you. That monitor is going to come out today. We’re going to take it right out, and it won’t hurt a bit.”

Ender nodded. It was a lie, of course, that it wouldn’t hurt a bit. But since adults always said it when it was going to hurt, he could count on that statement as an accurate prediction of the future. Sometimes lies were more dependable than the truth.

“So if you’ll just come over here, Andrew, just sit right up here on the examining table. The doctor will be in to see you in a moment.”
The monitor gone. Ender tried to imagine the little device missing from the back of his neck. I’ll roll over on my back in bed and it won’t be pressing there. I won’t feel it tingling and taking up the heat when I shower.

And Peter won’t hate me anymore. I’ll come home and show him that the monitor’s gone, and he’ll see that I didn’t make it, either. That I’ll just be a normal kid now, like him. That won’t be so bad then. He’ll forgive me that I had my monitor a whole year longer than he had his. We’ll be—
Not friends, probably. No, Peter was too dangerous. Peter got so angry. Brothers, though. Not enemies, not friends, but brothers—able to live in the same house. He won’t hate me, he’ll just leave me alone. And when he wants to play buggers and astronauts, maybe I won’t have to play, maybe I can just go read a book.
But Ender knew, even as he thought it, that Peter wouldn’t leave him alone. There was something in Peter’s eyes, when he was in his mad mood, and whenever Ender saw that look, that glint, he knew that the one thing Peter would not do was leave him alone. I’m practicing piano, Ender. Come turn the pages for me. Oh, is the monitor boy too busy to help his brother? Is he too smart? Got to go kill some buggers, astronaut? No, no, I don’t want your help. I can do it on my own, you little bastard, you little Third.

“This won’t take long, Andrew,” said the doctor.
Ender nodded.
“It’s designed to be removed. Without infection, without damage. But there’ll be some tickling, and some people say they have a feeling of something missing. You’ll keep looking around for something, something you were looking for, but you can’t find it, and you can’t remember what it was. So I’ll tell you. It’s the monitor you’re looking for, and it isn’t there. In a few days that feeling will pass.”

The doctor was twisting something at the back of Ender’s head. Suddenly a pain stabbed through him like a needle from his neck to his groin. Ender felt his back spasm, and his body arched violently backward; his head struck the bed. He could feel his legs thrashing, and his hands were clenching each other, wringing each other so tightly that they arched.
“Deedee!” shouted the doctor. “I need you!” The nurse ran in, gasped. “Got to relax these muscles. Get it to me, now! What are you waiting for!”

Something changed hands; Ender could not see. He lurched to one side and fell off the examining table. “Catch him!” cried the nurse.
“Just hold him steady—”
“You hold him, doctor, he’s too strong for me—”
“Not the whole thing! You’ll stop his heart—”

Ender felt a needle enter his back just above the neck of his shirt. It burned, but wherever in him the fire spread, his muscles gradually unclenched. Now he could cry for the fear and pain of it.
“Are you all right, Andrew?” the nurse asked.
Andrew could not remember how to speak. They lifted him onto the table. They checked his pulse, did other things; he did not understand it all.
The doctor was trembling; his voice shook as he spoke. “They leave these things in the kids for three years, what do they expect? We could have switched him off, do you realize that? We could have unplugged his brain for all time.”
“When does the drug wear off?” asked the nurse.
“Keep him here for at least an hour. Watch him. If he doesn’t start talking in fifteen minutes, call me. Could have unplugged him forever. I don’t have the brains of a bugger.”

He got back to Miss Pumphrey’s class only fifteen minutes before the closing bell. He was still a little unsteady on his feet.
“Are you all right, Andrew?” asked Miss Pumphrey.
He nodded.
“Were you ill?”
He shook his head.
“You don’t look well.”
“I’m OK.”
“You’d better sit down, Andrew.”
He started toward his seat, but stopped. Now what was I looking for? I can’t think what I was looking for.
“Your seat is over there,” said Miss Pumphrey.
He sat down, but it was something else he needed, something he had lost. I’ll find it later.
“Your monitor,” whispered the girl behind him.
Andrew shrugged.
“His monitor,” she whispered to the others.
Andrew reached up and felt his neck. There was a bandaid. It was gone. He was just like everybody else now.
“Washed out, Andy?” asked a boy who sat across the aisle and behind him. Couldn’t think of his name. Peter. No, that was someone else.
“Quiet, Mr. Stilson,” said Miss Pumphrey. Stilson smirked.
Miss Pumphrey talked about multiplication. Ender doodled on his desk, drawing contour maps of mountainous islands and then telling his desk to display them in three dimensions from every angle. The teacher would know, of course, that he wasn’t paying attention, but she wouldn’t bother him. He always knew the answer, even when she thought he wasn’t paying attention.
In the corner of his desk a word appeared and began marching around the perimeter of the desk. It was upside down and backward at first, but Ender knew what it said long before it reached the bottom of the desk and turned right side up.

Ender smiled. He was the one who had figured out how to send messages and make them march—even as his secret enemy called him names, the method of delivery praised him. It was not his fault he was a Third. It was the government’s idea, they were the ones who authorized it—how else could a Third like Ender have got into school? And now the monitor was gone. The experiment entitled Andrew Wiggin hadn’t worked out after all. If they could, he was sure they would like to rescind the waivers that had allowed him to be born at all. Didn’t work, so erase the experiment.
The bell rang. Everyone signed off their desks or hurriedly typed in reminders to themselves. Some were dumping lessons or data into their computers at home. A few gathered at the printers while something they wanted to show was printed out. Ender spread his hands over the child-size keyboard near the edge of the desk and wondered what it would feel like to have hands as large as a grown-up’s. They must feel so big and awkward, thick stubby fingers and beefy palms. Of course, they had bigger keyboards—but how could their thick fingers draw a fine line, the way Ender could, a thin line so precise that he could make it spiral seventy-nine times from the center to the edge of the desk without the lines ever touching or overlapping. It gave him something to do while the teacher droned on about arithmetic. Arithmetic! Valentine had taught him arithmetic when he was three.

“Are you all right, Andrew?”
“Yes, ma’am.”
“You’ll miss the bus.”
Ender nodded and got up. The other kids were gone. They would be waiting, though, the bad ones. His monitor wasn’t perched on his neck, hearing what he heard and seeing what he saw. They could say what they liked. They might even hit him now—no one could see them anymore, and so no one would come to Ender’s rescue. There were advantages to the monitor, and he would miss them.
It was Stilson, of course. He wasn’t bigger than most other kids, but he was bigger than Ender. And he had some others with him. He always did.
“Hey Third.”

Don’t answer. Nothing to say.
“Hey, Third, we’re talkin to you, Third, hey bugger-lover, we’re talkin to you.”
Can’t think of anything to answer. Anything I say will make it worse. So will saying nothing.
“Hey, Third, hey, turd, you flunked out, huh? Thought you were better than us, but you lost your little birdie, Thirdie, got a bandaid on your neck.”
“Are you going to let me through?” Ender asked.
“Are we going to let him through? Should we let him through?” They all laughed. “Sure we’ll let yo...

Some of the most hauntingly brilliant writing of the decade (INTERZONE)

Achieves and delivers more than almost anything else within the science fiction genre, Ender's Game is a contemporary classic (NEW YORK TIMES)

Card has taken the venerable SF concepts of a superhuman and interstellar war . . . and, with superb characterisation, pacing and language, combined them into a seamless story of compelling power (BOOKLIST)

Almost impossible to put down (LOCUS)

An incredible ending that knocks you sideways (SUNDAY EXPRESS)

This is Card at the height of his very considerable powers--a major SF novel by any reasonable standard. (BOOKLIST on ENDER'S GAME)

Almost impossible to put down (LOCUS)

Orson Scott Card is the award-winning author of the novels ENDER'S GAME, ENDER'S SHADOW and SPEAKER FOR THE DEAD, which are widely read by both adults and younger readers. He lives in Greensboro, North Carolina, with his wife and three children. --此文字指其他 kindle_edition 版本。
阅读更多