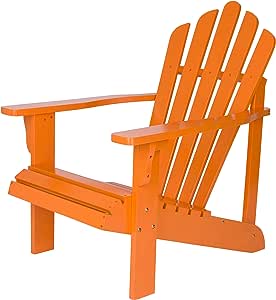 Made of high quality yellow Cedar wood known for its natural resistance to moisture, decay, and insect damage. Use of polyurethane paint for protection against weather, heat and sunlight. Rust resistant hardware. Assembles in approximately 25 minutes. seat and backrest are already pre-assembled. Assembly Required. 28.25 in. L x 35 in. W x 36 in. H (20 lbs.). This Chair features traditional, wide arm rests, curved seat, and high back support that makes the Adirondack Chair a pleasure to sit in.

Elaine H.
5.0 颗星，最多 5 颗星 Gorgeous, comfy chairs!
2018年5月29日 - 已在美国亚马逊上发表
已确认购买
I adore these chairs! The color is exactly what I wanted, so that is a bit plus. All the parts arrived just fine, and all were in A-1 condition. Assembline was a breeze except for two details. I can never figure out when someone says L or R which way I should be facing to get them right, and this proved true in this instance. If I were doing directions I'd label everything with an L or R, just for folks like me. Second, I never did get the devil's invention of a screw installed in the last case. Leaving something for my son to do is a lifesaving option that I too often use. I sanded very lightly and applied the sun resistant coating to the chairs, so they're good to go. If you're thinking of getting these, I'd say go for it; I'm 82, female, and if I can do it (except for the weird screw business) you can too!
阅读更多
6 个人发现此评论有用

Andrew Grygus
5.0 颗星，最多 5 颗星 Perfect fit, Easy assembly, Nice hard finish
2013年6月21日 - 已在美国亚马逊上发表
已确认购买
This chair arrived only a couple of days from my (late evening) order, even though I took "Free Shipping" (yeah, I'm a cheapskate). Assembly took less than 30 minutes from cutting the tape on the box - all parts fit perfectly with no pressure required for alignment, not something you always get with wood products. All the screws are Phillips - I HATE slotted screws! OK, there's a secret - if a Phillips screwdriver doesn't look a bit too big - it's too small. The larger bolts do also accommodate a blade screwdriver if that's all you have in the larger size.

The seat and back were completely pre-assembled, with all construction being with screws - no nails or staples. The finish is very smooth and hard, and the assembled chair is very light.

Now, I admit that at just 204 pounds, I can hardly stress this chair to its limits, and it's large enough I sort of rattle around in it, but I'm sure it'll be fine for my largest friends. Both size and bolting are quite adequate. The use of plastic barrels in critical joints rather than depending on screwing into wood is a very good feature.

The only (very minor) criticism I have is that the assembly instructions (which were very clear - with drawings) have not been updated to reflect an improvement in design. There are 6 barrel joints rather than just 2 - but this is hardly difficult to figure out when you have 6 plastic barrels in hand and there are 6 holes for them.

T. K. Sea
1.0 颗星，最多 5 颗星 These are not very good chairs (and that's an understatement)
2015年3月30日 - 已在美国亚马逊上发表
颜色: 柑橘色已确认购买
The quality on this chair (and footstool) is sorely lacking. Cheap, ultra-lightweight wood (cedar? I don't think so) that arrived split in numerous locations -- does Shine not pre-drill the wood before screwing these things together? The paint/stain is way too thin -- transparent in some spots. You can see knots and flaws in the wood. The factory should apply one more coat, and probably two, if they want to advertise these as "painted."

Assembly took me about two hours - mostly because I spent 90 minutes removing, gluing, clamping, screwing, and then re-installing three of the "factory assembled slats" -- two on the back, one on the seat. Then I was able to assemble normally -- at which point I noticed another flaw I should have glued (and that's just the chair -- the stool required two crack repairs and additional screws so it didn't wobble).

Oh well, they were on sale, and they look nice from 20 feet away.

I know normally Amazon will take this kind of thing back, but a) these were purchased in the fall and not assembled until spring and b) Once I started the install I figured fixing them would be less of a hassle than dealing the with a manufacturer who's obviously in the business of making chairs as cheaply as possible.

At any rate, I expect two seasons, at the most, from this chair. I thought the Shine chairs would be a good option to replace (what I thought was a similar quality/comparable price point), 20-year old cedar adirondack chairs. Sure, that chair has required repairs over the years (refreshed hardware, the occasional slat replaced or glued, and refreshing of the finish every 5 years or so. I haven't minded doing that work because that's the price you pay for "outdoor wood." If I wanted no maintenance, I'd buy plastic chairs. So I wasn't expecting a lifetime of hassle free ownership from the Shine chairs. But I think it is fair to expect that they'll not require repairs straight from the factory, and that they'll be built with enough quality that you can reasonably expect to get a few years out of them -- and more if you're willing to put in some elbow grease over the years.
阅读更多