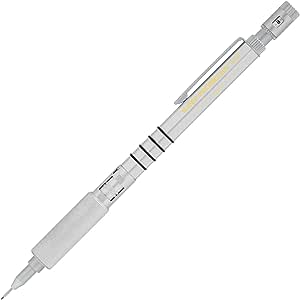 Aaron Earl
5.0 颗星，最多 5 颗星 Awesome Pencil
2018年4月29日 - 已在美国亚马逊上发表
尺寸: 0.9mm已确认购买
This is my new favorite sketch pencil. This thing is loaded with features and performs as expected. Had mine for 6 months now and have had no problems with it. Was a little worried to order based on the other reviews. I definitely wasn't disappointed. One thing to know is that the twist on the barrel has some burrs from manufacturing. Just be gentle with it the first couple of days and they will work themselves out. The lead selector at the top works better than most pencils I have had and stays in place while writing. The button has a nice solid click like my rOtrings. The balance and weight are just perfect (I bought it because it was tip heavy). The lead tube is plastic but I'm pretty sure all the internals are metal. The only cons I can think of are: the lead advance button is a little small and is hard to turn, the center section might be weak as other reviewers have mentioned (you probably don't want to buy a pencil like this and shove it in your pocket anyway), and in the even of an internal jamb this thing would be hard to disassemble. All I can say is buy this pencil, if you are a sketch artist like me or a draftsman this will serve you well. I plan to buy the other sizes soon.
阅读更多
4 个人发现此评论有用

Alan Jakub
1.0 颗星，最多 5 颗星 Major Flaw on Ohto Pencil's-
2020年5月8日 - 已在美国亚马逊上发表
尺寸: 0.5 毫米已确认购买
I thought I was going to really love these OHTO Mechanical Pencil's I bought several as I read how nice these are. BUT. and this be a big flaw on these pencil's as you can see ALMOST the whole outside is made of metal. However where you have the finger screw to change the tip size these are only 2 very little metal holding the top to the bottom. So, far 4 of my OHTO Pencils snapped at the exact same locations. These can not be put back together. I tried superglue. etc... I wasted a lot of money for these only to last about 6 months. I bought these to put different types of led in them for drawing as the cap has a nice marker to tell you which one you are using. But now they are worthless. So Buyer beware of these week point as these will break for you too eventually.
阅读更多

Jim McLaughlin
3.0 颗星，最多 5 颗星 Not the Greatest Thing Since Night Baseball
2016年10月31日 - 已在美国亚马逊上发表
尺寸: 0.5 毫米已确认购买
This pencil has a few idiosyncrasies that keep it from being great.
It's heavy, which personally I like, but the weight is concentrated at the tip. I'd prefer it to be a little more evenly distributed.
The knurled grip is too subtle, so there's not a lot of "grippiness" there.
The adjustable lead guide pipe is an interesting feature but it only feels locked in at full extension. At intermediate lengths it feels like it could slip while writing.
And the last annoying thing is the eraser cap/lead grade indicator. I prefer softer leads but the indicator goes only to "B". But I can live with that. What's really bugging me is that the cap does not fit tightly enough. No, I don't think it would ever just fall out on its own, but if you occasionally "fidget" with your writing implements, it wiggles around and that loose feeling is disturbing.
I really like the way this pencil looks—there's a lot going on there—but these annoyances keep it from being #1 in my rotation.

CC
5.0 颗星，最多 5 颗星 Superb Precision Pencil
2014年7月25日 - 已在美国亚马逊上发表
尺寸: 0.3mm已确认购买
Since other reviewers have already covered the Ohto Super Promencha's features in detail, I'll limit my review to my personal observations and to points not previously mentioned/expounded upon.

I purchased the 0.3mm model, but found the HB lead furnished with this pencil to produce a heavier line than that of other 0.3mm pencils I own. A change of lead solved the issue easily enough.

The Super Promecha is 5-5/8" long (not including the retractable pipe/lead guide) with enough heft to feel comfortable, but not so heavy as to produce premature fatigue.

The lead-type indicator in the cap was a big selling-point for me, as I usually use H, B or 2B lead ... but never the usual HB.
This feature is the very reason I purchased several Vario pencils (Faber-Castell) when they debuted years ago. Prior to that I'd have to print little labels with the lead-type and tape them to my mechanical pencils.

It's very well balanced, typical of Japanese-designed/made writing instruments (I own at least two dozen, most purchased in Japan, others via Amazon).

Upon picking the pencil up, it just seems to fall right into place and rests comfortably in either hand (I'm ambidextrous).

The knurled metal grip is large enough to allow for comfortable extended periods of writing.

While the instruction leaflet included with the Super Promecha is indeed written only in Japanese, I had no trouble following the diagrams and was able to set-up the pencil to my personal preferences in a matter of minutes.

A plastic (rather flimsy) carrying sleeve is also included.

Prior to receiving this pencil, I favoured my Uni Kuru Toga (High grade) & Faber-Castell Vario...
However, the Ohto Super Promecha has become my everyday go-to mechanical pencil.

If you're in need of a precision, well-built/designed mechanical pencil, you won't go wrong with the Ohto Super Promecha (Japanese import).

K. SWENSON
2.0 颗星，最多 5 颗星 My Issue: the Plastic Lead Reservoir Tube and sunken erasers
2016年3月25日 - 已在美国亚马逊上发表
尺寸: 0.9mm已确认购买
Disappointed. My gripe with this pencil - and most other mechanical pencils - is that the lead reservoir tube is plastic. Therefore every time you use or adjust the eraser the aluminum eraser holder (the metal band that goes around the eraser) ends up expanding the plastic. Eventually the eraser will not sit correctly: it will sink into the plastic lead reservoir tube and (1) become too deep to use and (2) unable to be removed. Sure, you can just use a little bit of paper between the aluminum eraser holder and the eraser, but that is just a short-term solution as the plastic lead reservoir will continue to expand. The Pentel Graph Gear 1000 uses a metal tube so this is not an issue, but they have a different weakness that I have described in that review. Will continue to look for a good mechanical pencil that will last years and not break the bank.
阅读更多
2 个人发现此评论有用
加入亚马逊Prime，从此免运费
亚马逊Prime会员可享海外购美/英/日/德跨境免邮，全年无限次！更有免费无限次阅读电子书服务
> 立即加入
了解我们
合作信息
帮助中心和购物指南