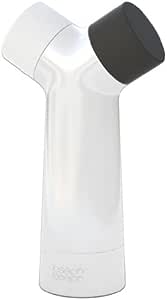 Christofer
1.0 颗星，最多 5 颗星 Good looks, odd ergonomics, cheap feeling, broken after 1 month of use. BUMMER.
2015年3月22日 - 已在美国亚马逊上发表
已确认购买
I lusted after this product for probably more than a year, loved the looks, like the design from this company, didn't actually need a pepper grinder... until my old one broke.. YAY! So I bought this and recieved it on the 12th of February. After filling up the chambers with tillacherry peppercorns and himalayan pink salt crystals, I found that it is really awkward to opperate; something about the angle of the Y just throws me off, it's a struggle to hold the shaft steady while twisting the caps, like patting your head and rubbing your belly perhaps. Also, due to the removable nature of the black and white caps, they feel really cheap when you opperate it. Figured I'd get used to the odd ergonomics and try to ignore the less-than-awesome feeling of the product. On the 21st of March it is now broken. That cheap-feeling white salt knob broke where the plastic gripped the metal shaft for the grinding mechanism, rendering the salt grinder useless. Josephjoseph has a 12-month warranty, but only on the products that are purchased directly from them on their website, and it seems that I have a 30-day from date of purchase return period on amazon / through the seller from whom I made the purchase, so no-dice on a tidy return. The pepper side still works and still feels cheap, I suppose I could keep it for the sole purpose of making low-sodium-diet jokes. Afterall, I am known for terrible jokes, sadly this review is not among them.
阅读更多
3 个人发现此评论有用

Fred Fandango
5.0 颗星，最多 5 颗星 Very Sturdy; Innovative Design
2011年2月19日 - 已在美国亚马逊上发表
已确认购买
This combination salt and pepper grinder is a lovely, innovative design that I find to be extremely appealing. It is a completely new take on two ubiquitous kitchen implements. It seems sturdy and has a nice fit and finish. Most importantly, it works perfectly and really does solve the problem of having to track down where you left the salt and pepper. With this, they are always together!

An Amazon Customer
4.0 颗星，最多 5 颗星 Interesting and cool
2014年6月17日 - 已在美国亚马逊上发表
已确认购买
I like it. It works, and it's fun. I wish I had gotten the green one, though, as the white doesn't quite make the statement on its own.
阅读更多

shrewdhunter
4.0 颗星，最多 5 颗星 Very good product so far
2015年2月10日 - 已在美国亚马逊上发表
已确认购买
Very good product so far. It looks like a piece of art and grinds well, but the knobs are very smooth and can be difficult to turn if your hands are even a little wet. I wish it was slightly smaller.
阅读更多
加入亚马逊Prime，从此免运费
亚马逊Prime会员可享海外购美/英/日/德跨境免邮，全年无限次！更有免费无限次阅读电子书服务
> 立即加入
了解我们
合作信息
帮助中心和购物指南