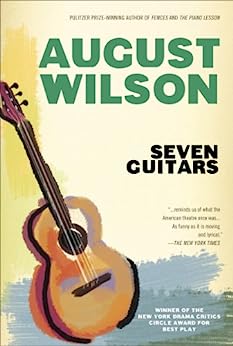 It is the spring of 1948. In the still cool evenings of Pittsburgh's Hill district, familiar sounds fill the air. A rooster crows. Screen doors slam. The laughter of friends gathered for a backyard card game rises just above the wail of a mother who has lost her son. And there's the sound of the blues, played and sung by young men and women with little more than a guitar in their hands and a dream in their hearts.

August Wilson's Seven Guitars is the sixth chapter in his continuing theatrical saga that explores the hope, heartbreak, and heritage of the African-American experience in the twentieth century. The story follows a small group of friends who gather following the untimely death of Floyd "Schoolboy" Barton, a local blues guitarist on the edge of stardom. Together, they reminisce about his short life and discover the unspoken passions and undying spirit that live within each of them.

"A play whose epic proportions and abundant spirit remind us of what the American theater once was. . . . As funny as it is moving and lyrical."
—Vincent Canby, New York Times

"A gritty, lyrical polyphony of voices that evokes the character and destiny of men and women who can't help singing the blues even when they're just talking. Bristles with symbolism, with rituals of word and action that explode into anguished eloquence and finally into violence."
—Jack Kroll, Newsweek

August Wilson is the most influential and successful African American playwright writing today. He is the two-time Pulitzer Prize-winning author of Fences, The Piano Lesson, King Hedley II, Ma Rainy's Black Bottom, Joe Turner's Come and Gone, Seven Guitars, Two Trains Running, Jitney and Radio Golf. His plays have been produced all over the world. Tony Kushner's plays include A Bright Room Called Day and Slavs!; as well as adaptations of Corneille's The Illusion, Ansky's The Dybbuk, Brecht's The Good Person of Szecguan and Goethe's Stella. Current projects include: Henry Box Brown or The Mirror of Slavery; and two musical plays: St. Cecilia or The Power of Music and Caroline or Change. His collaboration with Maurice Sendak on an American version of the children's opera, Brundibar, appeared in book form Fall 2003. Kushner grew up in Lake Charles, Louisiana, and he lives in New York. --此文字指其他 kindle_edition 版本。

J. Moore
5.0 颗星，最多 5 颗星 I Enjoy ALL Of Wilson's Works
2010年8月22日 - 已在美国亚马逊上发表
已确认购买
Each of August Wilson's plays is rich, memerable, and wholly poetic in its scope of the African American experience. Naturally with any series in any genre or medium, some plays are not as good as others--but mostly the entire cycle is a near masterpiece, and certain plays in the cycle (such as Fences) are a perfect masterpiece.

If you look at the structure of the cycle, you will see that to have ten plays put together to encompass a whole century in the lives of an entire group of people is no small feat. When August Wilson writes of the African Americans, he is in a sense writing about all Americans and how they live their lives. The plays demonstrate their voice in the rich poetry of the blues--one could very well be called the blues musician of the pen and the paper. With no more than a tenth grade education and a lifelong passion for books, Wilson has proven himself a true visionary.

August Wilson died in 2005. His absence will be long grieved, just as his immortal works will surely be forever cherished for their sharp-edged beauty and piercing vitality.
阅读更多
4 个人发现此评论有用

Victoria Nicholson
5.0 颗星，最多 5 颗星 Poetic
2020年7月11日 - 已在美国亚马逊上发表
已确认购买
The characters are well constructed. The dialogue genius. The moral or theme might be love and not love of money.
阅读更多