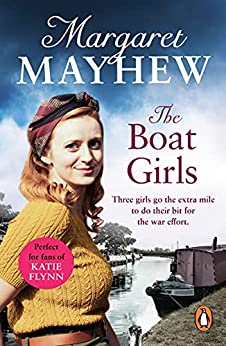 Etta
4.0 颗星，最多 5 颗星 The women we are
2020年10月30日 - 已在美国亚马逊上发表
已确认购买
I'm always interested in women who prove their mettle. I worked in the Bethlehem Steel Mills myself. The pride you get from doing a 'man's' job.... It's downright invigorating. The respect you get from some of the men just brightens your day.
' The Boat Girls ' was an interesting read. Now I have to research the locations of all of the locks. Yep...a good read.

MCST
5.0 颗星，最多 5 颗星 Great Historical FIction
2020年12月22日 - 已在美国亚马逊上发表
已确认购买
I am a fan of historical fiction, but I am not very interested in romance. This book is wonderfully written - and gives the reader good glimpse of life during WWII, as experienced by three young women who operated a canal boat. The author included a lot of historical details, which I found to be very interesting. There was also some romance, but it blended into the overall story quite nicely. I read another book by this author, called Bluebirds. It is also historical fiction and is also set in WWII. I enjoyed both books very much, and will read more books by this author.
阅读更多
3 个人发现此评论有用

Book teaderKindle Customer
4.0 颗星，最多 5 颗星 Worth reading
2020年10月31日 - 已在美国亚马逊上发表
已确认购买
This was an interesting read and very different from anything I've read. It didn't pull any punishes and described the tough and grit it took to do the job. The only thing was it left you hanging at the end with the story of Frances.
阅读更多
4 个人发现此评论有用

Howard Calloway
4.0 颗星，最多 5 颗星 NOT A BARGE VACATION
2021年1月8日 - 已在美国亚马逊上发表
已确认购买
INTERESTING BIT OF HISTORY SNATCHED FROM LIFE DURING WWII. I OFTEN THOUGHT IT WOULD BE AN FASCINATING VACATION TO BOOK PASSAGE ON A BARGE FOR A RIVER CRUIISE. THE YOUNG WOMEN IN
THE NOVEL DID NOT DID NOT HAVE A LEISURLY LIFFE ON THE RIVERS. THE COMMUNITY OF "BARGE PEOPLE"
WAS A DIFFERENT WORLD, VERY CLOSED TO OUTSIDERS. I WOULD RECOMMEND A MEMORABLE READ.
阅读更多
3 个人发现此评论有用

Martha
3.0 颗星，最多 5 颗星 A tale of locks.boats .and sometimes about the women who operated them in WWII
2021年2月18日 - 已在美国亚马逊上发表
已确认购买
I have read nearly all of Ms. Mayhew's World War II stories, the only one not yet read is the Singapore story. I liked "The Boat Girls" though not as much as the others; this one is more a tale of canal locks than the "girls" who worked them. True, they are there and there is some character development though it is a bit truncated and almost hurried. Her sense of place and time seems spot on, from everything else about the period I have read or heard about from those who lived it. I did learn a lot about what working on those boats at that time might have been like; merely reading about how hard and dirty the work was left me exhausted! Knowing these young women were in their teens and twenties made it yet more impressive. The personal stories are only sketched out, suggestions of some interesting,promising, sometimes aggravating young women doing work that had mixed reactions among families, skepticism, then reluctant acceptance amongst other boat people. Some romantic relationships are suggested but skimmed over. The emphasis on the work, the eternal opening/closing of locks is interesting but only up to a point if it dominates the story. I wanted more about the women, their friends.
阅读更多
2 个人发现此评论有用
加入亚马逊Prime，从此免运费
亚马逊Prime会员可享海外购美/英/日/德跨境免邮，全年无限次！更有免费无限次阅读电子书服务
> 立即加入
了解我们
合作信息
帮助中心和购物指南