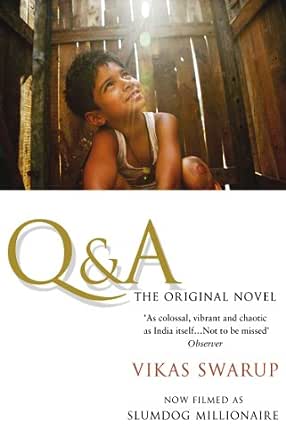 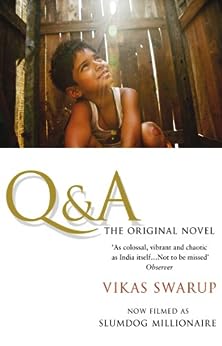 Well, for all this, it's got punch and narrative pizzazz: a strong, clear, instantly graspable storyline that doesn't encumber itself with character complexity, and the cinematography by Anthony Dod Mantle is tremendous. It's definitely got that quirky-underdog twinkle and the
silverware glint of awards can't be far away.The Guardian.

Taken from the novel Q&A by Vikus Swarup, this is a big, visually sumptuous and energetic film. It's Dickens meets the Brothers Grimm, but set in India. What Boyle gives us, though, is an India that British film-makers, usually riddled with imperial guilt, rarely show us: the modern, globalised India of the fast buck, media, celebrity,call centres and high-rises. This new India is perfectly summed up when the film's young hero, Jamal, who has just been kicked in the face, says to two American tourists who have witnessed the assault, "You wanted to see the real face of India? Well, here it is!"The Sunday Times.

Slumdog Millionaire is as acerbic as it is clear-eyed about the brutal power dynamics in modern-day Mumbai. But, at the same time, what makes it so warming and what has been inspiring audiences all across the world to cheer at its rousing ending, is its passion for a place that
writer Suketu Mehta has described as a "maximum city".Mumbai has been through hell recently. But Slumdog Millionaire, whose everyman hero is a Muslim, is a wonderful tribute to it and to its people. It is, in fact, a maximum film.The Telegraph.

Caleb McCullough-Smith
5.0 颗星，最多 5 颗星 Not bad
2019年10月16日 - 已在美国亚马逊上发表
已确认购买
I got the audio book to save time because I had to read it as a school project. All and all not a bad story.
阅读更多

Carolyn
5.0 颗星，最多 5 颗星 Buy it!! It's different then the movie but just as great!!
2009年2月16日 - 已在美国亚马逊上发表
已确认购买
I saw the movie first. After reading several reviews on here that the book was different from the movie I decided to buy it. This book is just as fantastic as the movie. It's the same basic concept. He wins a billion rupees on a game show and is accused of cheating. He then has to explain why he knows all the answers. Only a few stories are similar but still different enough to entertain. All the stories are cleverly written. I found that I couldn't wait to get to the question to see how it related to the story he just told. Buy this book and see the movie!! It doesn't matter in what order.
阅读更多
3 个人发现此评论有用

Ann
5.0 颗星，最多 5 颗星 Interesting to read
2015年9月15日 - 已在美国亚马逊上发表
已确认购买
Truly enjoyed this read. The format was interesting. The plotline gave insight into the culture. Saw the movie and wouldn't waste my time. It wasn't a bit like the book.
阅读更多
1 个人发现此评论有用