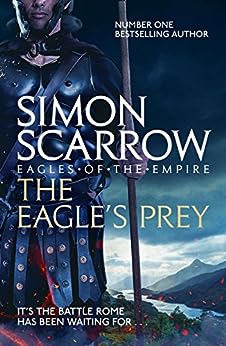 The Eagle's Prey (Eagles of the Empire 5) (English Edition) Kindle电子书

Praise for Simon Scarrow's novels: 'I really don't need this kind of competition... It's a great read' (Bernard Cornwell)

Gripping and moving (The Times)

A Rome full of HOUSE OF CARDS treachery... Roman soldiering at its very best - even by Scarrow's high standards - in this winning chunk of historical fiction (Sunday Sport)

Simon Scarrow is a former teacher who now devotes himself to writing full-time. He lives outside Norwich with his family. --此文字指其他 kindle_edition 版本。

N. Trachta
4.0 颗星，最多 5 颗星 Another good outing for Mr. Scarrow! Bravo!
2011年2月28日 - 已在美国亚马逊上发表
已确认购买
After finishing  The Eagle and the Wolves  I couldn't wait to dive into The Eagle's Prey. As with the earlier books, our heroes Centurions Macro and Cato are in England fighting with the 2nd Legion trying to subdue the Celts. Having recovered from their wounds ( When the Eagle Hunts ) and training local auxilia (The Eagle and the Wolves) our now centurions are now serving in the 3rd Cohort of the 2nd Legion under Centurion Maximius, trying to trap the Celts under Caratacus to end the fighting in England.

Over the past few books we've seen Cato mature from a bumbling youth who's book wise but not sure on dealings soldiers to someone who's starting to accept the mantel of centurion. Because of tensions in the 3rd Cohort, we see Cato's maturing accelerate like never before. Without Macro's support, Cato takes control of a unit and leads it where he couldn't have in earlier books. Complementing Cato's maturing is that of Macro's. Macro has been a steady career soldier who often projects a simple look at the world. This time however we see Macro in a different context; his dealings with Centurion Maximius show us that Macro is capable of more than being a simple soldier who stands in the ranks (Centurion Maximius is very reminiscent of Sergeant Major Dagineau or Sergeant Markoff from Beau Geste). This maturing of characters is important since the 3rd Cohort is in a tight position with Centurion Maximius being prepared to put his unit in a bad position for personal glory I couldn't help but be reminded of Fort Zinderneuf and Beau Geste. I couldn't help but wonder if Mr. Scarrow was watching one of the Beau Geste movies while developing his book and couldn't help but put Cato and Macro into a similar pickle. A very solid 4 star book that makes for a good read!

Roger J. Buffington
4.0 颗星，最多 5 颗星 The Roman Conquest of Britain at the End Game
2012年11月19日 - 已在美国亚马逊上发表
已确认购买
"The Eagles Prey" is book 5 in the "Cato and Macro" series. In this novel the Roman Conquest of Britain is nearing its end, although the outcome is by no means assured. The Romans have defeated the Britons in every major set piece battle, but the British leader, Caratacus, continues to rally his people and fight on. This novel features some startling developments concerning Cato and Macro which I will not give away here. Needless to say, this fifth installment in the series holds the reader's interest and then some.

One of the heartbreaking aspects of this particular novel is the ruthless mistreatment of the British civilians by the Roman Army that it portrays. One wonders if the conquest could have been effected more efficiently had the Romans behaved in a more humane manner. Perhaps it was simply not possible given the attitudes of the times. I found the portrayal of the Roman Army's attitude towards some of the civilian towns to be somewhat hard to take and downright heartbreaking. In fact, there is plenty to be lamented in this storyline. The British chieftain, Caratacus, comes alive as a complex and inspiring leader, and for me this was one of the more interesting components of this novel.

Michael T. Smith
5.0 颗星，最多 5 颗星 Real Life
2019年11月12日 - 已在美国亚马逊上发表
已确认购买
Plenty of action and brutal fighting. Sounds like my time in Vietnam with officers protecting their tales and the hell with the men. Brutality and destruction of human life was nothing. How many lives are wasted to solve a leaders thirst for promotion. Real life happens in this series.
阅读更多

R. Caniglia
5.0 颗星，最多 5 颗星 Best Yet
2017年7月20日 - 已在美国亚马逊上发表
已确认购买
I didn't think I'd like this book, but it was the best, yet. Reason? Not just action, but great character development. Not overdone, but more sophisticated than in the first four books. In those, Cato was a scared, if bright, kid that got more than his fair share of attention. The other characters were just props. In this book, Macro got another dimension and so did several other characters. Not maudlin. Interesting. Action was still there aplenty.
阅读更多
加入亚马逊Prime，从此免运费
亚马逊Prime会员可享海外购美/英/日/德跨境免邮，全年无限次！更有免费无限次阅读电子书服务
> 立即加入
了解我们
合作信息
帮助中心和购物指南