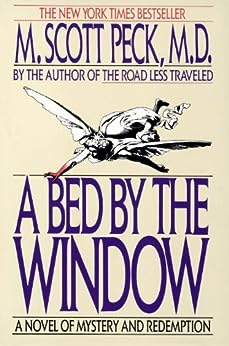 A Bed by the Window: A Novel Of Mystery And Redemption (English Edition) Kindle电子书

M. Scott Peck, M.D., is the author of several New York Times bestsellers, including The Road Less Traveled, which has spent more than ten years on the Times list. He and his wife, Lily, live in northern Connecticut and have been the recipients of several awards for peacemaking. --此文字指其他 kindle_edition 版本。

Mrs. Georgia Bates sat in the back seat of the station wagon, eyeing the dirty ridges of February snow along the edges of Route 83 with distaste. Her son, Kenneth, was driving. Marlene, her daughter-in-law, sat in the front seat next to him. The flat midwestern farmland, still mostly white with the vestiges of the last storm, stretched to the horizon past both sides of the road. Once Georgia had liked to think about the earth lying beneath the snow as pregnant with hidden new life. But it had been decades since she cared to have such thoughts.

When they were halfway there, she broke the silence. “I am being railroaded once again,” she announced.

Kenneth exploded. “For Christ’s sake, Mother, you know perfectly well you can’t live by yourself anymore. Two weeks home and you soaked every piece of clothing you have with urine, and every chair and sofa in the apartment.”

“You don’t have the right to do this to me,” Georgia went on, ignoring him.

Kenneth had heard it before. His voice took on its reasonable accountant’s tone. “I have had your power of attorney for the last two years. You are quite free to petition the probate court to change that. Within just a few days the court would appoint a psychiatrist to interview you. Then you and the psychiatrist would appear before the judge, and he would make his determination. It’s very simple.”

Georgia did not feel the least outwitted. But she had no intention of being interviewed by another psychiatrist. Silence returned to the car and continued until they arrived ten minutes later.

The large single-story building, its three wings extending outward like huge claws, lay sprawled in a shallow hollow next to Willow Creek. Built of cinder block and painted grim brown, it always reminded Kenneth of some anonymous modern factory. A factory for manufacturing what? he wondered. The sign at the side of the short driveway read: WILLOW GLEN EXTENDED CARE FACILITY. Kenneth pulled the car around to the entrance. Marlene leaped out and opened the rear door. “Can I help you, Mother?” she asked.

“I am quite fit, thank you,” Georgia replied icily; and, indeed, she climbed out spryly and walked behind Marlene into the foyer while Kenneth parked.

To the left was the Administration Center. Marlene went to the receptionist who guarded its door and announced their presence. Then she crossed to the small reception room on the other side. Georgia had already seated herself and Marlene went to sit beside her, then thought better of it and took the sofa on the opposite side of the room. Kenneth came in and sat beside his wife. The silence was heavy.

As they were waiting, Georgia happened to look down at her lap and noticed a hand resting there. It was a thin hand. The skin was wrinkled, with a collage of overlapping blotches, each with its own history. The veins were like crooked blue threads. “It is an old woman’s hand,” Georgia thought. There was a brief wave of panic. She jerked the hand away. The wave subsided. “I wonder whose hand that was?” she mused.

The silence was broken when Roberta McAdams strode in. “Good morning, Mr. Bates, Mrs. Bates,” she said heartily. “And good morning to you, Georgia! Welcome back to Willow Glen.”

Georgia snorted. “Madam Icecube,” she said to herself. She did not like Ms. McAdams, the deputy administrator. A slender woman in her early thirties with pulled-back dark hair, everything about her was crisp, efficient, and machinelike.

Ms. McAdams got right down to business. “We can’t give you your same room back, Georgia,” she said, “but we are going to put you on C-Wing again so you should feel right at home. Shall I call an aide to take you there while I am doing intake with your children?”

“No, thank you,” Georgia said firmly, every bit as decisive as Ms. McAdams. “I shall be quite happy to participate in what you call intake. I have no desire for you to be talking about me behind my back, the way you did on my last admission. Besides, I think it is only fair that my children should take me to my room, so that they can see where they are putting me.”

Ms. McAdams gave Kenneth and Marlene a look of sympathy. “Come right on in then, all of you,” she said, and escorted them across the foyer into the Administration Center. It was a busy place. Three secretaries were typing away, one at a word processor. A computer printer was clacking by itself. They followed Ms. McAdams across to her office. Motioning them to the chairs in front of her desk, she whipped into action, turning on her own computer and punching in the proper code. “Tell me the circumstances behind this readmission,” she said briskly, her eyes on the screen.

Georgia sat in silence and Kenneth led off. “The moment Mother was discharged three weeks ago she became incontinent again,” he said, his attention carefully directed to Ms. McAdams. “No matter how well Marlene cleans it, that wing of the house is full of the stench. She has to help Mother change her clothes, and she says she’s started to develop bedsores from the urine. It’s become clear we made a mistake in taking her out. I called Mrs. Simonton, who said you’d take her back. So here we are again after only twenty days.”

Ms. McAdams typed away. Marlene shifted, uncomfortable at the awkwardness of her husband’s speaking about her mother-in-law as if Georgia wasn’t there. She felt many other things as well: guilt at having failed in some nameless way; relief at the clothes and bedding she would no longer have to wash and the house she would no longer have to air daily; and, above all, confusion. Why couldn’t Georgia control her bladder? Or could she? Why had she regained control as soon as she’d been admitted to Willow Glen right after Christmas? Yet she had been unhappy there—so unhappy they had felt compelled to take her back home. Why? And why on earth had she immediately lost control again? She glanced at Kenneth, knowing that in his stoic way he was struggling with the same questions.

Barely glancing up from the computer screen, Ms. McAdams explained, “I know this is a readmission, but procedures require that I go through all the data again. Let’s see, how old is your mother now?”

Until this point, Georgia had been lost in reverie. Now she snapped to attention. “Thirty-seven,” she proclaimed.

“What?” Ms. McAdams asked, looking up at her as if she were an unwarranted interruption.

“Thirty-seven,” Georgia repeated. “I said I am thirty-seven years old.”

Ms. McAdams produced a faint smile of pained understanding. She bent back over the keyboard and punched in “seventy-six.” Then she went through the rest of the form: Georgia’s date of birth, marriage, number of children, date of widowhood, previous hospitalizations, physical illnesses, medications, financial assets, insurance. Georgia no longer bothered to listen. She was impressed, however, by the precision with which Kenneth answered Ms. McAdams’s endless questions. He was not just an accountant, he was a successful CPA, and, while she saw no reason to speak of the matter, she felt quite proud of him. He had done very well for himself. For that matter, so had her two younger children: a son who was a dentist and a daughter who was already an assistant principal. Which meant that she, Georgia, had done well for herself. Success breeds success. She had done her job. And now, thank God, it was over.

And so was the intake. Ms. McAdams ushered them back into the foyer. “Do you need an aide?” she asked.

“I don’t think so,” Kenneth replied. “We should know the way by now.”

Ms. McAdams did a sharp about-face and strode back into the Administration Center.

“I’m going to get the bags,” Kenneth announced, leaving his wife and mother alone in the foyer. The two women tried not to look at each other. Then Marlene felt ashamed by the silliness of it. “I’m really sorry, Mother,” she said gently. “I know this is upsetting for you.”

“If you were really sorry you wouldn’t be doing it,” Georgia shot back.

Kenneth came back carrying two suitcases, and the three marched silently toward C-Wing. Despite his assurances to the contrary, he was never quite sure he knew the way. The sprawling building reminded him of an airport: one wing looked just like every other wing. Each had its own color code: C-Wing was orange to the best of his recollection, but the fluorescent lighting in the corridors bleached out the tones so it was hard to tell which color was which. Only when one of the bedroom doors was open did daylight get into the hall. The floor was linoleum. It was spotlessly clean. Still, once they passed the foyer, the faint odor of stale urine was unmistakable and pervasive. But he knew that this came with the territory and that Willow Glen met the highest standards for nursing homes.

Halfway down the corridor an elderly woman, imprisoned in a gerichair, reached out to clutch Kenneth’s sleeve. “Have you seen my purse?” she whined. “Do you know what they’ve done with my purse? Someone’s stolen my purse. Where’s the doctor? I want to see my doctor. They won’t let me see my doctor.” Uneasily, he yanked away.

He felt better a second later when they neared the nurses’ station and he was able to discern Heather’s beaming face like a beacon of light in the gloom he felt. Kenneth was pleased that Heather should be on duty on this otherwise unpleasant morning. Of the licensed practical nurses who staffed C-Wing, he liked her best. Everything about her was soft. Her soft, slightly round young face with its soft skin—she could not have been more than twenty-five—was framed by soft black hair. “Good morning, Heather,” he said, smiling cheerfully.

Georgia tried to scowl at her, but she couldn’t quite do it. Somehow, scowling at Heather took too much energy.

“Peggy,” Heather said to the dull-eyed, skinny nurse’s aide sitting next to her, “would you take the Bateses down to Georgia’s room? It’s with Mrs. Carstairs. Georgia, I’ll be down to see you later once you’re settled in.”
--此文字指其他 kindle_edition 版本。
click to open popover