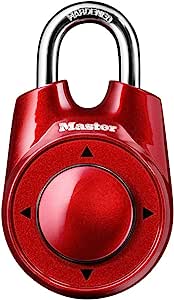 Michael Neaton
1.0 颗星，最多 5 颗星 Great idea. Very unreliable. Caused headache and frustration.
2016年10月6日 - 已在美国亚马逊上发表
颜色: 什锦已确认购买
I am not a dull person. I have read countless 1-Star reviews from people who simply do not understand a product and cause it to malfunction. I have ignored those reviews and time and time again I have been happy about my decision. This time, I assumed the same scenario was playing out and I chose to purchase this lock. Everything went smoothly. I set it up, tested it again and again, and began to use it. After one week of use, it decided to stop working. I did not change the lock. I didn't forget my input. I didn't even touch the thing. It just stopped opening. All my belongings were locked in! I had the lock cut and will never purchase this product again. This system is simply unreliable.
阅读更多
123 个人发现此评论有用

Michael Kelly
1.0 颗星，最多 5 颗星 Failed after a month. Stuck at gym. Had to call police to cut it off.
2017年1月4日 - 已在美国亚马逊上发表
颜色: 什锦已确认购买
This is one of my few negative reviews on amazon. I bought this same model one month ago to use at the neighborhood 24hrs gym. It seemed like a good idea as my eyes aren't so great anymore and not having to look at the numbers seemed cool. I figured the negative reviews were just user error. After all its a master lock. I still have one I have used since college 30 years ago... numbers are now worn off but it works. I set it this new slider up and have used it successfully like 20 times. Tonight at 2am with no one around and it being 20 degrees out it failed, with car keys in locker and I'm in shorts. Something broke inside and it would not open. I bought this new one to use at work..I don't trust it now. I had to call the police to cut it off... they were nice. No more sliders .
阅读更多
192 个人发现此评论有用

Customer
3.0 颗星，最多 5 颗星 Favorite unreliable lock
2018年1月2日 - 已在美国亚马逊上发表
颜色: 什锦已确认购买
This is my favorite unreliable lock. It's a neat little mechanical toy, but too cheaply constructed to be a good lock. Here are what I consider the pros, cons, important technical aspects, and some troubleshooting tips.

Cons:
* It needs a thorough troubleshooting guide.
* Many times it just won't open when you enter the right sequence of moves.
* The shackle often sticks when you try to pump it up and down to clear a combination.
* The internal components are plastic and cast metal, not machined metal. That's why it malfunctions so often.

Technical Aspects:
* Even though you can program it with a combination of arbitrary length, there are only 7,500 unique internal states, not counting the reset position. This means an internal state can be reached by more than one combo. For instance, if you program it to open with up-down-right-left it will also open with right-left-left because these two combos produce the same internal state. Another example is down-up-down-right is the same as left-down-right-right.
* Any combo with 12 or more moves is equivalent to some combo or combos with 11 or fewer moves. This is because it takes at most 11 moves to reach any of the internal states. (All this info is available in a PDF on the toool.nl site, just Google "toool master lock speed dial"). Programming with a really really long combo won't make it extra secure.

Troubleshooting:
* Pushing the shackle down toward the lock body puts the internal wheels in the reset position. Several times the instructions refer to pumping the shackle twice in succession, and this is because they know the shackle can stick on the first pump. Well, it can also stick on the first two pumps, which also won't reset it. Pushing it down at least 4 or 5 times really quickly will ensure that it is really reset.
* If the lock doesn't open after you set it to your own combination, it's most likely because it didn't properly reset between entering the factory combination and your own. If this happens, the new combination is the factory combination followed by your own combination.
* There can be a lot of kickback in the opposite direction if you flick the button too fast. If you flick it to up really fast, it might actually move down below the center for a split second afterward, which effectively inserts an extra move in your combo. When you are setting the combination for the first time, do it slowly so you don't inadvertently insert extra moves.
* The instructions say to use the nib of a ball point pen to move the little lever to change the combo. It's better to use something less tough, like a piece of plastic, because the little lever is prone to breaking off. Don't use something hard or metal like a screwdriver or you might break it.

Overall I think it's too glitchy to secure anything important, but I do like playing around with it. I hope Master Lock comes out with a second version of this lock made with machined components some day. The concept is great, the manufacturing needs more quality control.

The Master Lock I received has proved hopelessly problematic and money down the tube, because for some reason they are not returnable, even when defective. I successfully unlocked it from the packaging. To be absolutely certain, I repeatedly viewed, via Amazon, the product "how to" video multiple times, jotted down sequential notes plus my personal combination sequence (up, up, right, left, down); and, following instructions, was resolute entering my combination in moving the dial "fully" in each required direction as well as not releasing the button but gliding the dial seamlessly through my combination sequence. Yet,

My lock will not open. Perhaps I could use it as a bright red seasonal paperweight. I know of no recourse or rescue as long as the lock is closed in lock position. I have tried both the package combination as well as my personal combination. Others, too, have tried but to no avail.

Unfortunately, it is a real disappointment for a product that initially I was wonderfully excited about and has great potential. For the locks that work, it is really kool! I just want my lock to work.
阅读更多
44 个人发现此评论有用
加入亚马逊Prime，从此免运费
亚马逊Prime会员可享海外购美/英/日/德跨境免邮，全年无限次！更有免费无限次阅读电子书服务
> 立即加入
了解我们
合作信息
帮助中心和购物指南