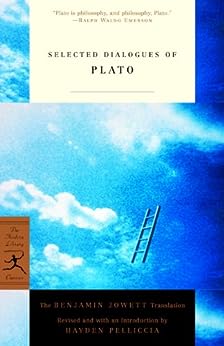 Having the task behind me, I can propose with some seriousness what I did not begin to guess when it still lay ahead of me: namely, that revising someone else's translations of works of Plato is not much less demanding than translating them afresh. That raises the question, Why stick with Jowett's old versions at all--why not simply produce new ones? I have consulted many of the translations produced since Jowett's, many of them up to date in every possible sense, and Jowett's, in my judgment, remain superior, in the most important respects, to them all. Jowett has a better command not just of English prose style, but of English prose styles, and that gives him a great advantage in rendering the language of a master of variation like Plato. In a work like the Symposium, to take a notable example, Plato puts on display his version of the idiosyncratic speaking styles of a group containing two dramatists of genius, plus a less original third who was ranked in antiquity as the greatest tragic poet after Aeschylus, Sophocles, and Euripides; of the remaining four speakers, one, the drunken Alcibiades, was reckoned by his contemporaries to be the most all-around brilliant member of his generation. (The longest speech is by Socrates, on whom see below.)

Jowett's successors, especially the more recent ones, are hampered by the contemporary abhorrence of any style other than the sponta same thing as the plain style)--though Jowett may sometimes have erred too much in the other directions. Modern tastes seem to coerce modern translators into adopting one or the other of two approaches only: the uniformly casual and colloquial, or the uniformly, and dryly, literal--neither approach likely to produce a particularly happy version of Plato's more literary works, which are those preeminently on display in this edition. Jowett, in comparison, had much greater freedom than we do--when Plato's speakers soar, Jowett often succeeds remarkably well in soaring with them--and we can follow along without too much embarrassment: after all, we expect such flights in nineteenth-century writers. Furthermore, I suspect that there are many besides me who actually prefer to think and find that the speech of such personages as Plato depicts might be more stylish, subtler, richer, and more accomplished than what we are used to hearing from our own friends and selves.

The revisions I have attempted are of two kinds: first, I have incorporated scholarly advances made in the establishment and interpretation of the Greek text since Jowett's time, in which category I include changes imposed where I disagree with Jowett's interpretation or think he made a mistake (sometimes Jowett changed the order of sentences, for example; I have tended to restore the order of the original). Second, I have removed archaisms or affectations of or in Jowett's English--those thatstrike me as likely to strike my contemporaries as ridiculous or, at best, off-puttingly quaint. For example, I change Jowett's "the tale of love was on this wise" to "the tale of love was like this." "What say you to going?" becomes "What do you say to going?" "Please to see to this" becomes "Please see to this." Adjustments of this basic tendency have been made widely and deeply. For example, the opening sentence of the Symposium is rendered by Jowett "Concerning the things about which you ask to be informed I believe that I am not ill-prepared with an answer"--which manages to be both stilted and a little arch in the high Victorian Oxford manner. The Greek, on the other hand, is somewhat informal and quite intimate; we are clearly overhearing a conversation that is already in progress, and is conducted among friends; the speaker, Apollodorus, uses an idiom that, while not quite diffident, is urbanely removed from the self-assertive: "Actually, it turns out that I am quite well up on the matter you are asking about." That is a fairly radical departure from Jowett's text. It must be emphasized, however, that I have not found the need for such significant tampering to be spread evenly through the works translated here: some passages have been subjected to extensive adjustment, others have been barely touched.

At this point, a word about sex would be appropriate, or at least about sex as it connects in a translator's mind to questions of language and style. Many of the changes I have made in revising Jowett comply with changes in taste that have occurred between Jowett's time and our own, and the public discussion of sex is a matter about which tastes have changed rather dramatically. Since readers can be assumed to have an interest in this subject, it seems worth getting it out in the open.

Contemporary readers may automatically assume that since Jowett was a Victorian,
his translation of ancient Greek works largely devoted, as, for example, the Phaedrus and the Symposium are, to the joys (or at least the theoretical joys) of male homosexual love must be full of puritanical euphemisms and bowdlerizations of the frank and uninhibited original texts. Jowett is in fact not so prudish, and, more important, the originals do not even approach the lewd. When a speaker is referring unambiguously to physical sex acts--for example, a young boy's complying with the sexual initiatives of an older male suitor--Jowett says things like "the boy grants his lover this favour," which may strike us as coy. The fact of the matter is, however, that "grant a favor" is not a bad literal translation of the most characteristic Greek verb used in such contexts, charizesthai (cognate with the word from which our "charity" derives). Jowett's version, as it turns out, is misleading, but not because of any lack of literal accuracy--his infidelity to the original is rather a result of situating his literal rendition into an alien cultural context: in Greek, the association of charizesthai with sexual compliance is so common and consistent that the word is completely clear and hence completely uneu-phemistic; in the cultures of both Victorian and present-day English, to refer to sexual submission as "granting a favor" is coy. In such instances as this I have nudged the renderings in the direction of a greater frankness, without, I hope, descending into the inaccurately vulgar. I have, for example, permitted paederastia to emerge as either "pederasty" or "boy-love" instead of "the love of youths," which is too sanitized. The essential fact guiding my efforts is that those people in Plato who speak of such matters are not as a rule leering, or coy, or indecent, but consistently urbane and, in many instances, amusedly detached.

The translation of passages that treat sexual matters invites discussion of the sexual matters themselves. Many readers of the Symposium and the Phaedrus in particular may be taken aback by some of the assumptions revealed in the characters' talk. Such readers might guess that the persons there depicted by Plato constituted an isolated, specifically homosexual group, or might generalize to the conclusion that pederasty was a much more open and widespread practice in Classical Greece than in the Western world of today. Both conclusions would be largely wrong, though each contains an element of truth. The evidence certainly does suggest that the average Greek male of the Classical period would be comparatively unsurprised and unimpressed if he detected bisexual impulses in his male acquaintance or even in himself (there are very few mentions of female homosexuality in the early periods--Aristophanes' speech in the Symposium contains one of the first--while references to male homosexuality, especially with insulting intent in the writings of comic poets such as, again, Aristophanes, are innumerable). On the other hand, however common it might have been thought to be, the homosexual impulse certainly does not seem to have been accorded blanket approval or admiration by the preponderance of Athenian citizens (to confine ourselves to the best documented community): for example, we often see the imputation of such impulses or activities deployed as a way of ridiculing or insulting a person. In sum, it seems about right to say that the culture of the period, if it did not accept homosexuality to quite the warmhearted degree that some modern advocates have hoped, it nonetheless did expect homosexual impulses and acts to exist and occur more routinely than present-day Western cultures have tended to. (Some of the characters in the Symposium and Phaedrus appear, in the aggregate, to go even further, and to exhibit an even greater receptivity, to the point of avidity in several cases.)

The five works assembled here have been chosen to serve as an introduction to Plato, and in particular to the more literary side of his genius. The volume also forms a good introduction to Plato's representation of his teacher Socrates, the figure who takes the dominant role in the majority of Plato's works. Socrates was born in Athens in 469 b.c. and lived there until 399, when he was put to death by the Athenian state for the crime of impiety. He wrote nothing, but was so devoted to philosophical conversation that he neglected all other pursuits in its favor, eventually reducing his family to poverty as a result. He is quite rightly regarded as one of the chief founders of the Western philosophical tradition, and in antiquity the philosophical schools of Platonism, Cynicism, and Stoicism, among others, proclaimed their descent from him. Almost everything we know of him derives from the depictions of Plato, the historian and essayist Xenophon, and the comic poet Aristophanes, all fellow Athenians.

This evidence (especially that of Plato) indicates that Socrates was the originator of a distinctive method of philosophical inquiry: the elenchus, which can be characterized as a form of cross-examination aimed at revealing inconsistency of argumentation. Socrates persistently denies possessing any positive knowledge himself, except for the knowledge that he is ignorant,... --此文字指其他 kindle_edition 版本。

Plato (c. 428 B.C. -- 347 B.C.) was a student of Socrates. He founded the Academy in Athens, the prototype of the modern university, whose most famous member was Aristotle. --此文字指其他 kindle_edition 版本。
阅读更多

Simply put, though I'm no fit judge of the translation's fidelity to Plato, I found this to be the most fluid, delightful rendering of Plato that I've ever come across. It is a masterpiece of literary nuance -- representing Socrates as the witty, weird, sometimes obnoxious, often poetic soul he must have been. Of course this is greatly due to Jowett's lovely prose style, but Pelliccia deserves laurels for so sensitively updating and de-Victorianizing the work. I've compared this revision to Jowett's original and find this to be much improved. Snap it up.

William C. Lloyd
2.0 颗星，最多 5 颗星 Not a good translation
2007年12月31日 - 已在美国亚马逊上发表
The Jowett translation of "Republic" is not good. I struggled with it in college [in the '60s], and never knew why it was such a chore until I read Allan Bloom's great translation, and his introduction to his great translation. John Wild explained further why the Jowett translation is so "off," in his "Plato and His Enemies and the Theory of Natural Law" -- which is, unfortunately, out of print. But go for Bloom's translation, it is wonderful.
阅读更多
6 个人发现此评论有用
加入亚马逊Prime，从此免运费
亚马逊Prime会员可享海外购美/英/日/德0门槛跨境免邮，更有会员专享折扣！
> 立即加入
了解我们
合作信息
帮助中心和购物指南