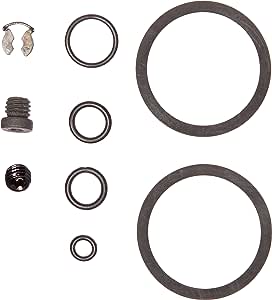 AZ Cyclist
5.0 颗星，最多 5 颗星 Must-use Kit for Elixir Brakes
2019年11月4日 - 已在美国亚马逊上发表
已确认购买
I have Elixir 3 brakes on my MTB. Other than pad changes, they'd never been serviced for 7 years, and worked poorly. I bought two of these kits and the Avid Pro Bleed Kit, and an additional bottle of DOT 5.1 from the auto parts store. It's a bit tedious the first time you do it, but if you follow Avid's procedures (go to SRAM site and download the service manual), it's straightforward. Only thing that's not clear is that you need to set the venting clearance after you finish the job and install the pads, before you re-install the wheels. Doing so sets the lever throw to the correct position. The new seals are very tight, so if you don't do this and the pistons are fully pressed in, you'll end up with a lot of lever throw and possibly brakes that don't work, especially if you're not installing new pads. It's easy to do. First, depress the lever until the gap between the pads is slightly less than the thickness of the disc (you can eyeball this). Now, flip the bleed block around to the end that has the two wedges. Insert it between the pads, it'll push them slightly apart. Now, carefully re-install the wheel without disturbing the pad position. Once the wheel is in, pump the brakes a couple times to verify the lever throw is correct. That's it. My brakes function like they're new. Sure would be nice if Avid threw in a few more bleed screw O-rings into the kit.
阅读更多

J. Abshire
5.0 颗星，最多 5 颗星 Must do for Avid Elixer brakes bleed
2015年12月22日 - 已在美国亚马逊上发表
已确认购买
If you do some research you will find all kinds of bleeding and performance issues with Avid Elixir brakes. I have come to the conclusion that any time you bleed Avid calipers you have to redo the seals to get that new feeling. I tried to bleed and fill so many times with lackluster results. Could be the rubber they use simply doesn't last or something, not sure. However every time I cleaned up the calipers both inside and out with break cleaner and replaced the seals I get perfect brakes again without fail!

So you have two options IMO: buy new brakes that use mineral oil or stock up on these kits.

Hope it works for you

Castle Restorations
4.0 颗星，最多 5 颗星 Could use 1 more O-Ring
2014年3月28日 - 已在美国亚马逊上发表
已确认购买
Great little kit. My only complaint is that it should have had a replacement O-ring for both bleed port screws. Those O-rings get worn every time you bleed the brakes and they are so tiny that they aren't available many places.

I had no issues getting the pistons out. I just pumped the brake lever until they almost popped out themselves. If one extends more than the other press it back in until they are both almost out then keep pumping until one pops out. The second one was extended enough that I could pull it out with my fingers after I split the caliper.
阅读更多
5 个人发现此评论有用

Peter F
5.0 颗星，最多 5 颗星 Worked great!
2017年8月7日 - 已在美国亚马逊上发表
已确认购买
Worked like a charm! Brakes are like new with new seals. You can find good directions online to walk you through the process. Just ordered another one for my rear brakes of my Avid Elixir R brakes. It's a bit of a pain, but cheaper than buying new brakes or taking it to the bike shop!
阅读更多
加入亚马逊Prime，从此免运费
亚马逊Prime会员可享海外购美/英/日/德跨境免邮，全年无限次！更有免费无限次阅读电子书服务
> 立即加入
了解我们
合作信息
帮助中心和购物指南