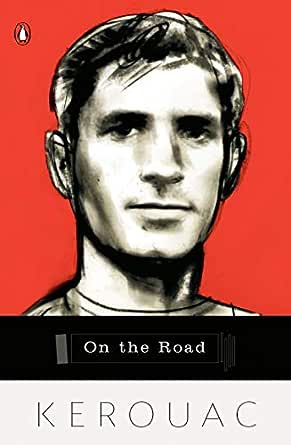 Jack Kerouac was born in Lowell, Massachusetts, in 1922. Educated by Jesuit brothers in Lowell, he decided to become a writer at age seventeen and developed his own writing style, which he called 'spontaneous prose'. He used this technique to record the life of the American 'traveler' and the experiences of the Beat Generation, most memorably in On the Road and also in The Subterraneans and The Dharma Bums. His other works include Big Sur, Desolation Angels, Lonesome Traveler, Visions of Gerard, Tristessa, and a book of poetry called Mexico City Blues. Jack Kerouac died in 1969. --此文字指 kindle_edition_av 版本。

The most beautifully executed, the clearest and the most important utterance yet made by the generation Kerouac himself named years ago as "beat" The New York Times I read On the Road in maybe 1959. It changed my life like it changed everyone else's -- Bob Dylan --此文字指 kindle_edition_av 版本。

栗子先生
5.0 颗星，最多 5 颗星 where are you going?
2011年9月30日
已确认购买
I have commented on this item two years ago, but last month I re-read it, and found something more amazing in it.
For other readers, my suggestion is that favorably you can find some books about Jack Kerouac in libraries, because this book, and almost every other book of JK's is half-autobiography, and this book is no exception.

At the phase when JK wrote the book, he was going through a critical time in his life. You can read the sense of lost in this book. JK and his friends, in some sense, represented a new lifestyle, which was criticized by numerous critics, and meanwhile supported by fans.
Actually JK is a very complicated man, but this book does not show himself. JK's focus was his friend Neal Cassady, who was JK's all-American idol. I myself was taken in by the story, especially by some descriptions and narrations in it. The writings about driving and speed and passion are the most beautifully written in American literature, even the canon of world literature. I can almost resonate with Dean Moriarty(Neal Cassady), and feel the throbbing of his vigor. His sexuality, spontaneity and energy is what every guy wanting to do something unusual is looking for. I am not saying people should follow Neal/Dean's steps; I just mean sometimes when we can't breakthrough the real-world prison, it is good to see others unleash their desire and vitality.

Some of the writing is this book is, to a point, boring, but some is very very touching. You can feel the strange feeling of half-excitement and half-melancholy.Ans at a point, I am sure you want to screw all the rules and get in the car, starting your own life that can be called "the life on the road".

张正荣
5.0 颗星，最多 5 颗星 Why People Like Jack Kerouac Are Always on the Road
2014年3月31日
已确认购买
Sometimes, struggles are exactly what we need in our lives. If we go through our life without any difficulties, it would crriple us. We would not be as strong as what we could have been.
阅读更多
7 个人发现此评论有用
有帮助
回应 报告滥用情况