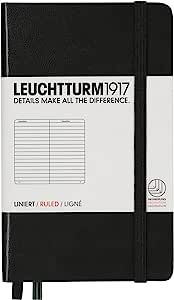 Dakota Reader
5.0 颗星，最多 5 颗星 Worth checking out
2013年3月3日 - 已在美国亚马逊上发表
已确认购买
I discovered Moleskine notebooks in 2002 and have barely looked back. I use them in my work -- field research with a lot of note-taking -- and as a daily journal. Since 2002 I have written through 18 pocket notebooks and 21 large notebooks, all of them Moleskines, my go-to notebook. For the pocket notebooks I use in fieldwork I tend to rely on ballpoints with only occasional use of fountain pens (my fountain pen of choice is an extra fine point Rotring 600). The ballpoints work well, but the issues with fountain pens are well known when it comes to Moleskine. Still, I have no problems with the EFP and Noodler's Black ink. But lately, I've been experimenting with other, wetter, inks and have felt a little hampered by the Moleskines, in spite of my overall happiness with them. In the past, I've played with Rhodia and Habana in quest of perfection, but keep coming back to Moleskine because of my own idiosyncratic needs: I like the narrow, or college, rule (I have small handwriting), the stiff covers for writing in the field, the near perfect size that fits in the pocket of a heavy duty shirt (canvas or denim), the flat open-book quality, and am willing to work with the ink restrictions.

Enter the Leuchtturm1917. I ordered one to check it out (and it arrived within a few days of the order). This is the closest thing I have found to a pocket Moleskine in size (the Leuchtturm is just a hair wider and taller, still fits well in those same pockets), width of rule (almost exactly the same as the Moleskine -- same number of lines per page, too), and overall look (I'm partial to black covers). It's got the ribbon and the pocket in the back. The feel of the cover is almost exactly the same as the hard cover Moleskine. The ruled lines are a little lighter than in the Moleskine -- I like that fainter line. All pluses! The paper color is slightly whiter (I prefer the creamier color of the Moleskine) and the cover just a bit more flexible (I prefer the stiffer cover of the Moleskine, but there's not enough difference in the Leuchtturm to put me off). The Leuchtturm has perforated pages in the back (which I don't mind but have no use for since I put post-its on the back inside cover for detachable notes, plus a few loose sheets into the pocket for leaving notes for people). I guess I'd prefer not to have the perforations since I use the notebook as a permanent record and worry that the sheets will fall out with use and reference -- but they seem to stay tight so far. The already numbered pages are nice (though I just start my Moleskine by going through and writing numbers at the top -- no big deal though some don't like having to do that), as is the table of contents section -- total number of pages (front and back), counting TOC and other un-numbered pages is exactly the same as the pocket Moleskine at 192.

Where the Leuchtturm excels is in the paper quality. It really is true that you can use wetter inks without bleed-through! I experimented with Noodler's Bad Blue Heron, which just won't work with a Moleskine, and it has no bleed-through at all in the Leuchtturm. So the range of fountain pen inks I can use is broader (though I haven't explored a huge range, nor gone beyond my EFP). But it does take longer for the inks to dry in the Leuchtturm and smearing is a risk (I handle this with a blotter page cut to fit the notebook). There is show-through on the inks, though, about the same and maybe even a very tiny bit worse than the Moleskine -- could be the lighter paper color?

All in all, my own feeling is that the Leuchtturm is an alternative to Moleskine worth exploring. I don't think it's the slam-dunk victor in the comparison. Depends on what features are important to you. For me, the pros and cons of each, where they differ, makes them roughly equal for me and my needs -- which is to say that they are both very good for my uses. They both get top rating from me and I'll probably use both (I don't worry about price difference though Leuchtturm is a better bargain -- at the rate I go through a notebook, I hardly feel it anyway). Leuchtturm seems to be made by a family-run company and that's appealing, too. If they would stiffen the cover, use a more off-white color, get rid of the hump so it lies flatter, and drop the perforations I would give them the clear edge over Moleskine. For now, it's really nice to know of two brands that I find pretty close to perfect, each missing that perfection in their own minor ways (and none that bother me).
阅读更多
33 个人发现此评论有用

Magnus
4.0 颗星，最多 5 颗星 very good, but not perfect, for fountain pen users
2018年5月12日 - 已在美国亚马逊上发表
已确认购买
Missing only one star for not holding up well to really wet fountain pens & inks. Rhodia can do this so I know it's reasonable. Otherwise, I have really standardized on this notebook and go through several every year. I take them everywhere.

With some of my really wet pens & inks I will see feathering and bleed-through. Especially with vintage flex pens. But those are fringe cases. The paper in this notebook is resilient to most reasonable fountain pens, even with broad nibs (though there's not much room to write with a B nib in a pocket notebook).

I wish Leuchtturm's Master was made this well.
阅读更多

Lilith Eden
5.0 颗星，最多 5 颗星 Completely perfect
2018年7月20日 - 已在美国亚马逊上发表
已确认购买
The Leuchtturm hype is real. The build is so solid and the paper is deliciously creamy. There is some ghosting with wetter pens but never any bleed through.

I love the index because I use one notebook at a time for everything: lists, journaling, random character notes. The index and page numbers transforms the chaos.

I have filled several of these and will keep buying as long as they are available.
阅读更多

Peggy Wright
5.0 颗星，最多 5 颗星 Items appears to be exactly as grandson requested...
2019年12月17日 - 已在美国亚马逊上发表
已确认购买
Ordered one last year for same grandson...he asked for another one this year because he liked the last one so much...thank you.
阅读更多