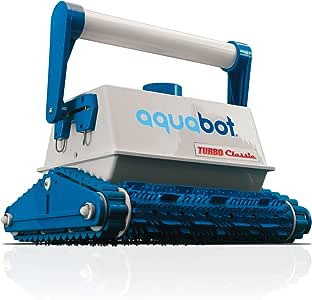 Ron
2.0 颗星，最多 5 颗星 Downward Slide for Turbo but Great New Product: Aquabot X4
2015年7月20日 - 已在美国亚马逊上发表
颜色: 蓝色已确认购买
This was our 5th Aquabot Turbo in 15 years. First let me say that our overall experience with Aqua Products has been very good. The units work as advertised and we have been extremely pleased with the results in our pools. However there has been a noticeable decline in the value of this product over the years. The first unit lasted 5 years, the 2nd: 4, the 3rd: 3, the 4th:2 and this one lasted not even 1 month! Thank goodness it died at day 27and could be returned to Amazon within their 30 day period. Otherwise, I would have been required to return the unit to Aqua Products Service Department and their less than stellar service ratings. As mentioned in other reviews, Aquabot repair costs are astronomical and I found most minor repairs were easy to do DIY such as replacing rollers, drive belts, etc. This new Turbo unit was working OK but when I removed it following a cleaning session, oil was being released from the drive motor. Oil was evident on the top of the water in the pool and the filter bag as well and then it completely oiled out when sitting on the side. This is not the first dead motor but at least the first one lasted 5 years.
I am giving it a "2 star" due to the positive response from Aqua Products. The reason for communicating with them is that there is a notice on the box to contact Aqua Products Service and do not return to the Seller. After explaining the situation to the Service Department, they sent a note to Aqua Products Corporation and within two days, I received a phone call from Steve and he authorized the return. Amazon was GREAT in that by now it was past the 30 day return period and they did not hesitate to make it happen.
New Unit Aquabot X4! (Not the Pura 4X or Breeze)
I looked at several competitive units to replace the dead Aquabot Turbo and found that most had a similar drive and scrub system to the Aquabot Turbo. Therefore replacement schedules similar to the Aquabot (Drive Belts, Scrubbers, etc..) could be expected. They also had filter bags.
I discovered that Aquabot had just released a new unit (named Aquabot X4) with a completely new drive system and cleaning mechanism. Due primarily to Steve's interaction on the dead Turbo at Aqua Products (he did not even mention the X4), I purchased the X4 and am completely satisfied. It cleans faster and more thoroughly than the Turbo and operates through a true 4 Wheel Drive mechanism that really does improve coverage and above water level cleaning. Also no filter bag! It has fine mesh filters that are supremely easy to clean. It even picks up DE. It comes with an upgraded Controller and Caddy. I will follow up as the year progresses with our X4. The only problem now is an inventory of Turbo replacement parts!

Bill S.I.NY
1.0 颗星，最多 5 颗星 Not Recommended
2017年7月18日 - 已在美国亚马逊上发表
颜色: 蓝色已确认购买
Lets get something straight here, anyone who is looking at robot pool cleaners probably has their doubts about how they work, especially with the costly price tag. They are like bad politicians, promise the world and don't deliver. I have a 12x26 in-ground vinyl lined pool with two bottom drains. I wanted it to pick up leaves and dirt. Now, getting to the performance of ABT. Looks great, it had no problems picking up loose dirt and leaves. It did however ignore fine particulates like sand and accumulated dirt. It has these great looking brushes front and back but they spin as slow as this thing moves....SLOW. It climbed walls when it wanted to, got stuck on drains almost all the time, drove into walls and stayed there for minutes before turning around. It ran over the same spots and I was constantly babysitting it to push it into places it hadn't been yet. Cleaning it wasn't hard, but the bag system is just sloppy and outdated. Not my idea of spending almost 800 bucks to make my life easier. I returned it and I'm shopping for another brand.
阅读更多
1 个人发现此评论有用

Kindle Customer
4.0 颗星，最多 5 颗星 Customer Service - use web form.
2015年3月12日 - 已在美国亚马逊上发表
颜色: 蓝色已确认购买
This is my second Aquabot. The first one lasted about 6 year with one major repair fairly early on. When it died I decided to get the current version of the same model. This new unit does not work well at all. One of the main problems seems to be the extremely stiff power cord. It interferes with the unit’s ability to move around the pool. I have a very simple, relatively small pool. My old Aquabot cleaned it very thoroughly in less than 2 hours. The new unit doesn’t do the job even in 3 hours. Even if I go out and reposition the unit it often misses spots. I have e-mailed the manufacturer twice in the last month and never even got a reply. I cannot recommend this unit at all.

UPDATE - They never responded to me using the customer service e-mail. However, I went back and used their web form and got a fairly quick reply. I sent my unit back, prepaid. After speaking with a service tech I got them to install one of the old style power cords. The unit now works pretty much like the original one I had. It does a good job cleaning the pool.
阅读更多
5 个人发现此评论有用
加入亚马逊Prime，从此免运费
亚马逊Prime会员可享海外购美/英/日/德跨境免邮，全年无限次！更有免费无限次阅读电子书服务
> 立即加入
了解我们
合作信息
帮助中心和购物指南