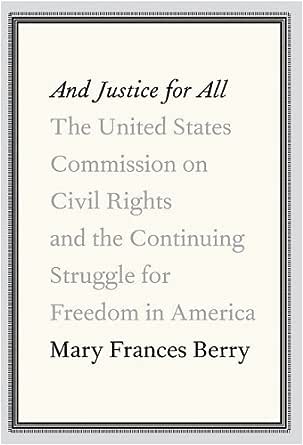 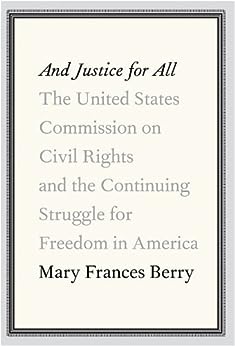 And Justice for All (English Edition) Kindle电子书

Mary Frances Berry was born in Nashville, Tennessee. She received a bachelor’s and master’s degree at Howard University, a doctorate in history from the University of Michigan, and a juris doctor degree from the University of Michigan Law School. Dr. Berry was the assistant secretary for education in the U.S. Department of Health, Education, and Welfare. She has received thirty honorary doctoral degrees and numerous awards for her public service and scholarly activities, including the NAACP’s Roy Wilkins Award and Image Award, the Rosa Parks Award of the Southern Christian Leadership Conference. She has also received the Hubert H. Humphrey Civil Rights Award from the Leadership Conference on Civil Rights. In addition to having been the chairperson of the U.S. Civil Rights Commission for eleven years, Dr. Berry is Geraldine R. Segal Professor of American Social Thought at the University of Pennsylvania, where she teaches history and law. --此文字指其他 kindle_edition 版本。

“A powerful and inspiring story of the American civil rights movement–a story of change, vision and courage.  Change has come to America and one of the ways it happened was through the work of the United States Commission on Civil Rights, formed against all odds in 1957 by President Eisenhower and the Congress. The commission, during its five decades on the battlefront of injustice and inequality, moved far beyond Eisenhower’s initial vision for it, and became a major factor in the success of the civil rights movement that has led us to the victories we enjoy today. Attacked and undermined at times by politicians and unsympathetic Presidents, the commission invited ordinary people to testify at its hearings in their towns and cities and in Washington, D.C.  Sometimes under threat of reprisal, even death, those struggling for equal justice came to rely upon the commission’s impartiality, and independence.  It was the commission’s reports and recommendations that helped to gain the Civil Rights Act of 1964, the Voting Rights Act of 1965, the language minority protections enacted in 1975, the Age Discrimination Act of 1978 and the Americans With Disabilities Act of 1990.  Mary Frances Berry, the commission’s chairperson for a decade, has written its too little-known history. It is an important, galvanizing and moving book.”

Responding to the “Negro” Protest

see after the 2000 presidential election. It was her first appearance before any official inquiry, and it had not been easy to come forward. She faced a packed hearing room, the glare of a mass of television cameras, and a gaggle of print and radio media as she testified about how a white Florida Highway Patrol trooper stopped her on her way to vote. She was driving just south of Tallahassee on the only main road leading to her polling place in Woodville. The officer looked at the forty-nine-year-old woman’s license and then let her drive on. She was puzzled because “nothing was checked, my lights, signals, or anything that they usually check.” Angered by the memory, she spoke more rapidly. “I was intimidated by it and I was suspicious of it.”

John Nelson, fifty-two, another African American witness, at first was too nervous to speak. Then, finding his voice, he recalled the unmanned Florida Highway Patrol cars parked outside his polling place in Monticello, twenty-five miles east of Tallahassee. Nelson testified that he started to turn back and then forced himself to go forward. “I thought that was unusual. It makes you wonder, why is it there? What’s wrong?” At his precinct the intimidation continued as, for the first time, instead of just asking for his voter registration card, the poll worker demanded two pieces of identification.

Apostle Willie Whiting, unlike Tucker and Nelson, was eager to testify. The fifty-year-old African American pastor of the House of Prayer Church in Tallahassee relished describing his election-day experience before the commission. As he stood in the polling place with his family, a poll worker told him he was a convicted felon and could not vote. Whiting protested that he had never even been arrested, but to no avail. Asked by general counsel Edward Hailes how it felt, he answered in a booming voice, “It didn’t feel good.” His family and “other people at the polling place” observing him. Whiting said he felt “sling-shotted back to slavery” by the shame it brought. One after another, African American, Latino, Haitian, older American, and other citizens who were disabled described a nightmare of official government-implemented disenfranchisement.

The testimony in Florida resembled in some ways the commission’s first hearing in Alabama, in December 1958. These were the early years of modern racial protest, when the term “race relations” began to take on new meaning. In Montgomery, blacks had refused to ride city buses for more than a year to end transportation segregation. In Birmingham, bombs were exploding, including one in the home of Alabama Christian Movement for Human Rights leader Rev. Fred Shuttlesworth and his family on Christmas morning. Meeting in the Fifth Circuit Courtroom in the Federal Building in Montgomery, the only venue in this cradle of the old Confederacy where blacks and whites could meet together, the commission heard testimony about the endemic violence and intimidation. Commissioners stayed at Maxwell Air Force Base because integrated hotels were legally impermissible.

At the 1958 hearing, twenty-six African American witnesses, all of them educated, property-owning taxpayers who met the state’s residence and legal requirements for voting, told the commission that they were denied the right to register to vote and faced implied and open threats. Risking their livelihood and their lives just by testifying, witnesses came forward to tell of their despair over their treatment and their burning desire to vote. Tuskegee resident Charles E. Miller, a Korean War veteran, told the commission, “I have dodged bombs and almost gotten killed, and then come back and been denied to vote—I don’t like it. I want to vote and I want to take part in this type of government. I have taken part in it when I was in service. I think I should take part in it when I am a citizen.”

Aaron Sellers, owner of a 240-acre farm in Bullock County, told of waiting for nine hours, in a separate room, while whites were quickly registered. Intimidation capped off the boredom. As Sellers and five other “Negroes” waited in line, a white man asked what was their “trouble.” When they answered, “We are waiting to register,” the white man replied, “If I were you all—you are citizens already. If I were you I would go on back home.” When he returned and realized they hadn’t left, the white man yelled angrily, “Well, I thought I told you all to get the hell out of here.” Although they had waited for hours, intimidated and frightened, they left.

The five white and one African American men on the commission who listened to these courageous African Americans were just adjusting to their duties. In the wake of Brown v. Board of Education, the Montgomery bus boycott, continued black protest and white reaction, this new commission had been established by President Eisenhower and Congress as a response to the emerging civil rights crisis. By the end of the Eisenhower administration, these men would reach well beyond the president’s political purposes, and the commission would play a major role in the struggle for civil rights.

John Hannah, the commission chairman, was a second choice after retired Supreme Court Justice Stanley Reed first accepted and then turned the president down. Reed said that it undermined the image of the Court for justices to take on other governmental roles after their tenure. Hannah, who had been Eisenhower’s assistant secretary of defense, was president of Michigan State University. At Defense, one of his responsibilities was the completion of the integration of the armed forces and civilian personnel in the services.

The other commissioners appeared to fulfill Eisenhower’s political needs. His staff understood that the president wanted a “Negro” on the commission and he wanted someone whom the Senate would easily confirm. E. Frederick Morrow, the first and only African American professional on the White House staff, recalled from his conversations with senior staffer Maxwell Rabb that a confirmable “Negro” requirement automatically disqualified any “social worker or member of NAACP, etc.” from becoming a commissioner.

White House staffers settled on sixty-two-year-old “sturdy, bulb- nosed” Ernest Wilkins, a Chicago lawyer and former president of the Cook County Bar Association, for the “Negro” slot. Wilkins, who was “accepted by the establishment black and white,” had already been confirmed as an assistant secretary of labor for international affairs. In almost three years at Labor, he had quietly presided over the president’s committee charged with preventing racial discrimination in government contracts, officially chaired by Vice President Richard Nixon. Wilkins apparently worked well with A. Philip Randolph, the organizer of the Brotherhood of Sleeping Car Porters, who led the 1940s March on Washington protests that were principally responsible for the creation of the contracts committee, and the only black vice president of the American Federation of Labor– Congress of Industrial Organizations union (AFL-CIO). Wilkins also received high marks for his representation of the United States in international labor organizations.

Wilkins’s publicly reported comments on racial matters as an assistant secretary of labor were benign and inoffensive to whites. When whites stoned Vivian Malone, a black woman, for trying to attend classes at the University of Alabama, Wilkins called the incident “deplorable.” However, he suggested no remedy and tepidly said that it should be seen as affording some people the opportunity to gain “new insights into their own lives” from the problems “involved in change.” He also told an Urban League dinner on February 15, 1956, that “the cloak of freedom is sitting much better on our collective shoulders these days—though not too well at that.” He continued: “There needs to be a little tailoring done here and there—for instance, in Mississippi, South Carolina and Washington DC—I have no doubt that it will finally get done.”

Eisenhower also wanted “moderate” white Southerners on the commission. He appointed sixty-four-year-old Robert G. Storey, the dean of Southern Methodist University’s Law School and a renowned Dallas attorney who had served as executive trial counsel for the United States at the Nuremberg trials of major war criminals after World War II. Storey had also served as president of the American Bar Association, as president of the Inter-American Bar Association, and as a member of President Truman’s Hoover Commission on Organization of the Executive Branch of the U.S. Government.

The president’s other Southern “moderate” appointee, seventy-two-year- old Tampa lawyer Doyle E. Carlton, was the governor of Florida during the Roosevelt years. He had dealt successfully with the collapse of the state’s land boom, a violent hurricane, the Mediterranean fruit fly infestation, and the nation’s Depression. His only other foray into politics was an unsuccessful run in 1936 for a Democratic nomination for the U.S. Senate. Carlton, a frien... --此文字指其他 kindle_edition 版本。
阅读更多
click to open popover

njf
5.0 颗星，最多 5 颗星 And Justice for All
2013年3月9日 - 已在美国亚马逊上发表
已确认购买
I have been a fan of Mary Frances Berry for years. There is no other in her category of presenting truth with fairness...honesty, integrity, passion and a desire that justice be sought, fought for and cherished. Mary Frances is someone to be trusted, looked up to and believed. She does not sugar-coat or varnish truth.
阅读更多
2 个人发现此评论有用