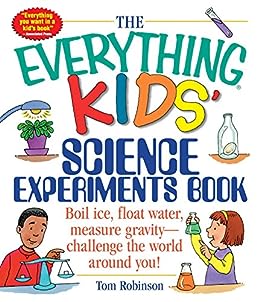 With The Everything Kids' Science Experiments Book, all you need to do is gather a few household items and you can recreate dozens of mind-blowing, kid-tested science experiments. High school science teacher Tom Robinson shows you how to expand your scientific horizons--from biology to chemistry to physics to outer space.

You won't want to wait for a rainy day or your school's science fair to test these cool experiments for yourself!
阅读更多
Previous page
Next page
›  查看更多商品促销信息

Harry E. Keller
3.0 颗星，最多 5 颗星 Flawed Explanations Ruin Good Experiments
2014年6月13日 - 已在美国亚马逊上发表
已确认购买
If only the explanations for each experiment were written by someone who knew science...

I haven't yet read every word of this book. I've been browsing for experiments for my grandchildren to do with me. I'm a scientist, trained at Caltech and Columbia University (PhD in chemistry). I'm a former large-university professor etc.

I'll give just three examples of where this book goes wrong and perpetuates science misconceptions.

1. "The Scientific Method"
There's just no such thing. Science is messy and does not lend itself to such a neat to-do list. This misconception was born when reporters simplified something written by John Dewey. Although Dewey protested, it caught hold and has persisted ever since. In the book's introduction, this canard is trotted out yet again. It's sad.

2. Jets Work by Pushing against the Air.
In one experiment, a balloon jet is made. The explanation tells that escaping air molecules push against molecules in the surrounding air and so propel the balloon. What utter nonsense!!! You might as well suggest that after you have thrown a ball, that ball pushes on you as it moves through the air toward its destination.

Imagine a sphere with air pressurized inside. The air molecules inside are pushing against all parts of the sphere, and these forces are balanced. Now, punch a hole in this sphere. Suddenly, the force against the side opposite the hole is no longer balanced by a force on the opposite side. There's a hole there! This difference in forces propels the balloon in the direction away from the hole.

3. Iron in Water becomes Magically Charged.
Put dirty pennies in a mixture of water, vinegar, and salt. Remove the pennies. Add some iron (steel) nails. The nails become coated with a bit of copper and change color. What has happened?

Vinegar and salt produce an acidic solution with chloride ions in it -- tantamount to hydrochloric acid (muriatic acid) but very safe. It's strong enough to dissolve the copper oxide on the dirty pennies and suspend copper cations in solution. Cations are positively charged. More importantly, they are oxidized (as in reacted with oxygen) with respect to the copper metal.

Now, place some iron (steel nails or paper clips) in the same solution. The explanation says that the nails become negatively charged and attract the positive copper ions. Nonsense! There are no charges here. Electrical charge is a powerful force and not released by merely putting nails into some modest liquid. What really happens is electrochemistry, the subject of my PhD thesis. It's the same concept that makes a "potato clock." It's the force that Alessandro Volta unleashed with his "voltaic pile." Dissimilar metals in ionic solution create an electrical potential. Connect them with a wire, and current flows. In the solution, one metal is being oxidized while the other is being reduced.

All of the above is simple science. I've expanded the explanations beyond what you'd provide to the target ages of the book so that you can clearly see the errors.

Why couldn't the authors have consulted a scientist to review this book before it was published? Why didn't the publisher check?

Beyond the problems with the book, the fact that it made it into print with these sorts of errors (and there may be many more) reflects a poor state of science literacy among our populace. It's also very unfortunate that his book continues to propagate misconceptions about science.

Were it not for the many nice experiments, I would have given this book the lowest possible rating.

Jim H.
5.0 颗星，最多 5 颗星 This is a fantastic book for rainy days, homeschooling, even family time.
2016年9月12日 - 已在美国亚马逊上发表
已确认购买
This book has 5 chapters Biology, Chemistry, Physics, The Planet Earth, and The Human Body. Each experiment has background information on what you will be learning about.
The first experiment for example is putting food coloring in water, and placing a white carnation in the water, to watch the flower change colors as it draws the colored water up through its roots. But the introduction explains live things are very complex, that there are a lot of things happening inside that we don't see.
After each introduction it states a question to engage the participants. Then provides a material list, procedure steps, and one of my favorite parts is it also explains what's happening during the experiment. Each experiment also has a follow up question in which the answer is provided in the back of the book.
But that is not all there is included in this book there are also words to know, jokes, even different websites pertaining to each experiment.
This book is great for parents who want to teach kids about science or even just need something to do. Not only are there great experiments but also very detailed descriptions on what takes place during each experiment. Each experiment has a lesson to be learned, most involve everyday household items you probably already have and even questions involving what you noticed happening during the experience. I have done a couple with a group of kids with ages ranging from 5-10 each of them discussing before and after results and they were all ready to do another after we were done.
Overall I recommend this book to families who seek out things to do with family time, or perhaps with kids that are having a tough time with science who knows you might have the next world’s renowned scientist.
阅读更多
9 个人发现此评论有用

seminole77
5.0 颗星，最多 5 颗星 Grandparents Strategy #9
2017年1月22日 - 已在美国亚马逊上发表
已确认购买
Grandparents strategy # 9: Now you see it. This will seem obvious, but wait. So we all know books are good for brain development, reading skills....blah blah blah. What the fiction ever... All we need is a reason to spend time with our grandkids. But lets face it, we aint chasin the ball the way we used to. If we can sit and read a book. "KaaaPoww", "SlaaaWhamm" we got a dynamic duo of doating. Time with your grandkids and so close you can kiss em! Share the love. They are the most worthy after all. Not withstanding we can chill in the big chair and not run around in the sun pretending we aint sweatin just to have fun time with the love bugs. Beside the fact that we can fool their parents into thinking they will have more time to themselves. What a load of diaper dank that is. SHeessh before ya know it, all you got is time to yourself. Highly overrated But who said new parents were all crystal clear with their thought process? Have you seen some of those thought bubbles above their heads? It looks like this: "sup dude" ....IDK....WUA....emoticon, emoticon, emoticon. Ive seen labels on melons at the grocery store with more content. At least they can do one thing right. GRANDKIDS!!!
Okay..chill brainiacs, I feel you about to comment....I got this. Yes, reading is good auditory stimuli, neuronal development and cognitive concentration. But its more importantly good for grandparents getting more and more time with their grandkids! Tick tick tick.. that aint no pacemaker your hearin. Thats time tellin ya to book time for the prime time, in time before ya got no time. ( mic drop )
Oh yeah..awesome book. Totally recommended
阅读更多
1 个人发现此评论有用

Gracious
5.0 颗星，最多 5 颗星 WORTH THE MONEY, GOOD ITEM FOR KIDS
2022年8月12日 - 已在美国亚马逊上发表
已确认购买
Granddaughter loved it. So did her mom.
阅读更多