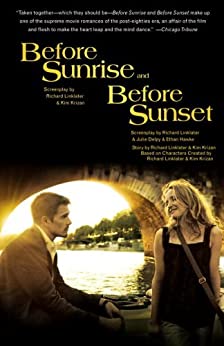 “Taken together--which they should be--Before Sunrise and Before Sunset make up one of the supreme movie romances of the post-eighties era, an affair of the film and flesh to make the heart leap and the mind dance.” --Chicago Tribune --此文字指其他 kindle_edition 版本。

Fade in.
1
INTERIOR: TRAIN - AFTERNOON
The Eurail rolls along. Inside, passengers sleep, read, and stare out the window. A few walk up and down the aisles.
C00ELINE, a young woman in her mid-twenties, is curled up in her seat reading Georges Bataille's Story of the Eye. Strikingly attractive, she plays it down by wearing no makeup, a loose-fitting vintage dress, and flat shoes. She continues reading while taking an occasional bite of a chocolate bar. Sitting four rows back and on the other side of the aisle, JESSE, also mid-twenties, is engrossed in Klaus Kinski's memoir, All I Need Is Love. Casually good-looking but a little scruffy, he dresses in the jeans and T-shirt mode. Suddenly a couple, two fortyish types who have been arguing semiquietly in the seat behind CELINE, start yelling at each other in German. The WIFE takes a swipe at the newspaper the HUSBAND has been screening himself behind.
WIFE Will you put down that damn newspaper and listen to me?
HUSBAND What've I been doing the last thirty minutes? Would you shut up for Chrissake?
WIFE You shut up! How dare you tell me to shut up! It's the same damn thing all over again! I can't believe-
HUSBAND I said shut up! I'm putting down my newspaper and telling you to shut up.
CELINE suddenly gets up, grabs her bag, and starts looking for another seat. A few rows back, she finds a seat across the aisle from JESSE. Before sitting down, they make brief eye contact and kind of shake their heads and smile at the tension. Just as she settles in and goes back to her book, the WIFE gets up and storms down the aisle. JESSE and CELINE follow her with their eyes, and as she passes them they find they are looking right at each other. He makes a funny "uh-oh" face.
JESSE Do you have any idea what they're arguing about? Do you speak English?
CELINE Yes. But no, I don't know. My German is not that good. (a beat) Have you ever heard that as couples get older they lose their ability to hear each other?
JESSE Really?
CELINE Supposedly men lose their ability to hear higher-pitched sounds and women eventually lose hearing on the low end. I guess they sort of nullify each other or something.
JESSE Must be nature's way of allowing couples to grow old together and not kill each other, I guess. There's a slightly awkward moment where they don't know if they should continue talking or not. She glances back down at her book but he keeps looking at her.
JESSE (continued) What are you reading? She holds up the book so he can see what it is.
CELINE How about you? He shows her what he's reading. Neither has much to say about the other's reading material.
CELINE (continued) There are so many weird people on the train, no? Last week on my way to Budapest I was sitting and talking with four other people in the lounge car and it turned out that three of them had killed people.
JESSE No way.
CELINE Really. One was a war veteran, one had murdered her boyfriend, and another had caused a bad car wreck.
JESSE So you were the only one who hadn't killed anyone?
CELINE No, I was one of them. Which one do you think? She laughs and he slowly joins her.
JESSE I know what you mean. I've met some weirdos. There was this British guy sitting across from me the other day who kept throwing his body against the back of his chair, yelling about how we should all join together and stop the train. He was saying, "Everybody, now, we can stop technology. All together . . ."
CELINE So what happened? He demonstrates by throwing his body against his seat.
JESSE And you know, me and a few others tried for a while, but we couldn't stop technology.
The WIFE who stormed away earlier suddenly comes back and the argument resumes, right in front of them.
JESSE (continued) I was thinking about going to the lounge car sometime soon. You wanna go?
CELINE We better. They get up and walk to the door of their car. He pushes the door open button, and as the door opens he extends his hand toward her.
JESSE Oh, I'm Jesse. It's James, actually, but my whole life everyone's called me Jesse.
CELINE So it's Jesse James?
JESSE No, just Jesse.
CELINE Celine.
They proceed through the door and CELINE pushes the door open button to enter the next car. There is some confusion as to who is opening the door for whom before CELINE proceeds and JESSE follows her toward the lounge car.

2
INTERIOR: LOUNGE CAR - AFTERNOON
They sit at a table, eating chips and taking an occasional swig from a drink.
JESSE So how do you speak such good English?
CELINE I went to school for a summer in Los Angeles and I've spent some time in London. How do you speak such good English?
JESSE I'm American.
CELINE I know. It's a joke. I knew you were American, and, of course, you don't speak any other language.
JESSE Yeah, yeah, I'm the dumb, vulgar American who has no culture. But I tried. I want you to know I took four years of French. I tried, I was ready. When I was in Paris, I was standing in line at the metro going, "Un billet, s'il vous plaît. Un billet, s'il vous plaît." And then I got up to the window, I looked at the lady, and blanked out. "Uh, uh, I need a ticket for the subway." No more French for me. (a beat) So where are you headed?
CELINE Back to Paris. My class starts next week.
JESSE Where do you go to school?
CELINE La Sorbonne. You know?
JESSE Sure. But you were in Budapest?
CELINE Yeah, I was visiting my grandmother.
JESSE How is she?
CELINE Okay. How about you-where are you going?
JESSE Vienna.
CELINE What's there?
JESSE I don't know. I'm flying out of there tomorrow morning.
CELINE Are you on holiday?
JESSE I don't know what I'm on. I've just been traveling around the last two or three weeks.
CELINE Were you visiting friends, or just going around on your own?
JESSE I visited a friend in Madrid for a while, but mostly I've just been . . . (new thought) I got one of those Eurail passes, and you know what's fascinating about traveling around? You spend all this time trying to reach your destination, you get there, you look around, it's never exactly what you'd hoped, you head off somewhere else, and hope for something better.
CELINE It's like getting ready for a party, getting there, and falling asleep. That's why when I'm traveling I kind of force myself not to expect anything from anywhere or anyone. And then, whatever happens is a surprise. The most insignificant thing can become an endless subject of interest, no?
JESSE That's what I like about traveling-you can sit down, maybe talk to someone interesting, see something beautiful, read a good book, and that's enough to qualify as a good day. You do that at home and everyone thinks you're a bum.
CELINE I like that though. But it's like my favorite American writers. They describe everything you wouldn't want to live through, and yet you cannot stop reading of this exciting, boring life.
JESSE So what do you study?
CELINE Literature. But I haven't decided yet what I really want to do.
JESSE Do you want to write?
CELINE Yeah, but . . . (new thought) I kind of had this obsession a few years ago about creating a new form of expression. It was of course an abstract and lost quest, but I was feeling all art forms seemed used up. I was especially rejecting words. They seemed so rusted and dirty. And they've been used for such evil ends. Sometimes, you know, language is so limited. It's like . . . if you think about it . . . She holds her hands out fairly wide and round.
CELINE (continued) This is an individual's mental experience and perception and . . . She holds her hands together and forms a small circle.
CELINE (continued) This is how much can be expressed through language. We just don't have words for so many of the impressions we have. She parts her hands and gestures to the large outer circle.
CELINE (continued) So most of our life we will never be able to express to anyone.
They sit there for an extended moment, neither sure what to say next. Suddenly JESSE smiles and jokingly starts to get up.
JESSE So I guess . . . that's it-it's been nice not communicating with you. They both laugh.
JESSE (continued) Really, though, I basically agree with you, and maybe it's a sad fact of life, but I think it doesn't bother me that much. Maybe I'm wrong about this, but I think that lack of communication frustrates women more than men.
CELINE Yes, because men are perfectly content to sit in front of TV all day drinking beer and watching sports.
JESSE Yeah, that's true, but have you ever done that? I did it once with a friend of mine. Drank some beer, had some chips, and watched a couple of games. It was the first time in years I literally jumped for joy. On some level it's sticking your head in the sand, but on another I think it must serve some tribal purpose.
CELINE I actually agree with you. I kind of like sports. It's one of these few times when men are treated like stupid objects . . . I'm joking. So you haven't told me what you do. Are you still in school?
JESSE Nah, I never graduated from college.
CELINE Are you working?
JESSE I have a stupid job like everyone else.
CELINE Is it boring? You're not happy?
JESSE No, it's a decent job. I don't get paid that much. I don't do that much.
CELINE So what is the job?
JESSE I write for a newspaper, the Fort Worth Star-Telegram, and pretty much get to do what I want there creatively, so it's okay.
CELINE ... --此文字指其他 kindle_edition 版本。

Julie Delpy was born in Paris and appeared in her first film when she was fourteen.  She is best known for her roles in Three Colors: Red and White. She lives in Los Angeles.

Ethan Hawke is best known for his staring roles in the motion pictures Dead Poets Society, Reality Bites, Hamlet, and Training Day, for which he was nominated for an Academy Award.  He is also the author of the novels The Hottest State and Ash Wednesday. He lives in New York.

Kim Krizan has written numerous screenplays, including historical biographies of Mata Hari and Anaïs Nin that are currently in development.  She appeared as an actor in Slacker, Dazed and Confused, and Walking Life. She lives in Los Angeles with her husband.

Richard Linklater, a screenwriter and director, has made twelve films, including Slacker, Dazed and Confused, Waking Life, and School of Rock. He is based in Austin.