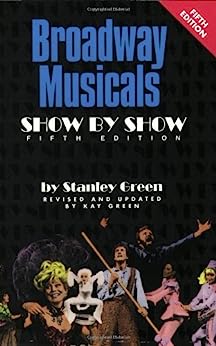 英语版本 Stanley Green (作者), Kay Green (作者) 格式: Kindle电子书
|
分享
分享
广告
显示所有 格式和版本 隐藏其他格式和版本
(Book). The most comprehensive and widely used Broadway reference book has been expanded and updated to include more than 300 of the most important and memorable productions of the American musical theatre. Chronologically arranged beginning with The Black Crook in 1866, this edition includes show entries up through the recent hits ( Rent , Sunset Boulevard , Kiss of the Spider Woman , Victor/Victoria , Passion ) and all the latest big revivals ( Show Boat , How to Succeed in Business Without Really Trying , The King and I ). Features a wealth of statistics, inside information, critical reception, cast lists, and pithy commentary about each show. Includes seven completely revised, cross-referenced indexes and over 200 photographs.
阅读更多
Previous page
Next page
›  查看更多商品促销信息

Susan
5.0 颗星，最多 5 颗星 Must have for anyone in musical theatre.
2019年1月4日 - 已在美国亚马逊上发表
已确认购买
This book has proved invaluable for me by providing background information on so many musicals. I am an actor , director, singer, who loves to put together my own acting-singing cabaret type shows and have used this book many times for ideas.
阅读更多

C. Sleigh
4.0 颗星，最多 5 颗星 Most used text book out of 6 years of College
2008年1月13日 - 已在美国亚马逊上发表
Let me begin this review by stating, that of all of the text books I have had after a six year stint in college, I have used this book the most. I have used this book to not only research shows for synopsis', but I've helped a local high school pick their yearly musical from this show for the past three years. I am sad that it only goes up the 1996 year, and have been awaiting a new version for a while now. But if you need a time frame, this book helps with giving you the year, directors, original cast, and a brief synopsis of the show itself. This helpful for any music director/show director, I highly recommend this book for anyone persuing musical theatre history.
阅读更多
1 个人发现此评论有用

George Bauerschmidt
4.0 颗星，最多 5 颗星 The Official Broadway Musical Reference Book
1998年8月23日 - 已在美国亚马逊上发表
This is a good *reference* book to see what happened and how things played out on Broadway. The behind the scene stories and what lead up to the show is fascinating, although every listed show doesn't have that much detail behind it.

The book is usually updated with new editions, but currently is out-dated (doesn't include Lion King, The Producers, Jekyll & Hyde, Titanic, etc.) Reading about the earlier Broadway shows (first show "The Black Crook" [1866]) is interesting and contains information you probably won't find anywhere else, including some failed shows (less than 5 performances), last minute casting decisions or movies that were made based on the show. I wish the listed revival shows would have more information than a basic "ditto" that refers to the original performance. However, if it is really meant to be a reference book, then it succeeds in that business without really trying.

The statistics given for how many performances a show had is nice, but can't be used to determine the success of that show today. The revival shows are learning that. With better access to New York (modern travel) -- numbers are increasing, but on the other hand, with more choices and a finicky audience that may be too PC for it's own good, some old shows don't work well now. If you're looking for tools to help you decide on choosing a musical, take a look at "Let's Put on a Musical" by Peter Filichia (1993) which is seven years newer besides.

Holly C. Frabizio
5.0 颗星，最多 5 颗星 This book is a great reference
2006年3月11日 - 已在美国亚马逊上发表
I purchased this book for my father. He is a music professor and teaches a course in Broadway Musicals. He just raved about how helpful it is to he and his students.
阅读更多
1 个人发现此评论有用