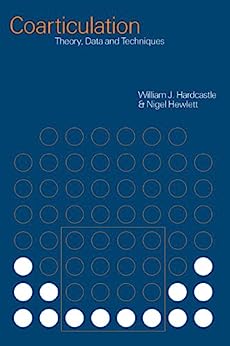 英语版本 William J. Hardcastle (编者), Nigel Hewlett (编者) 格式: Kindle电子书
|
分享
分享
广告
显示所有 格式和版本 隐藏其他格式和版本
The variation that a speech sound undergoes under the influence of neighbouring sounds has acquired the well-established label coarticulation. The phenomenon of coarticulation has become a central problem in the theory of speech production. Much experimental work has been directed towards discovering its characteristics, its extent and its occurrence across different languages. This book is a major study of coarticulation by a team of international researchers. It provides a definitive account of the experimental findings to date, together with discussions of their implications for modelling the process of speech production. Different components of the speech production system (larynx, tongue, jaw, etc.) require different techniques for investigation and a whole section of this book is devoted to a description of the experimental techniques currently used. Other chapters offer a theoretically sophisticated discussion of the implications of coarticulation for the phonology-phonetics interface.
阅读更多
Previous page
Next page
›  查看更多商品促销信息

Karen Chung
5.0 颗星，最多 5 颗星 Not the last word on coarticulation, but a should-read
2003年3月1日 - 已在美国亚马逊上发表
Because this is a collection of papers by different authors, quality and style vary from chapter to chapter, but there are few wasted words, and hardly a sentence without a kernel idea worth taking the time to understand. On the other hand, it is a difficult and demanding book to read cover to cover, and most readers will probably prefer to focus on areas of particular personal interest rather than tackling the whole volume at one go.
Chapter 1, entitled "The origin of coarticulation", discusses what causes coarticulation, a history of the investigation of coarticulation, and how coarticulation develops in children¡¦s speech. A series of coarticulatory models is reviewed, including Lindblom's 'target undershoot' model of the 1960s (p. 16), Oehman's observation that two vowels interact with each other across intervening stops (p. 17), Wickelgren's idea that we store not phonemes in our brains but collections of context-sensitive allophones (p. 18), up to Keating's 'window' model of the 1980s (p. 21), in which every feature of a segment is associated with a range of values rather than an absolute target.
Part II is entitled "Research results: components of the motor system for speech". Each chapter features a key articulatory organ or organ complex: the velopharyngeal complex, the tongue, the larynx, the lips, and the lips and jaws.
Part III provides a home, under the catch-all classification of "Wider perspectives", for two chapters that did not quite fit elsewhere, "Cross-language studies on articulation" and "Implications for phonological theory".
The chapters of part IV, "Instrumental Techniques", report on the state of the art of various specialized methods and instruments for performing articulatory and acoustic measurements. The methods presented are: palatography, X-ray, computed tomography (CT), magnetic resonance imaging (MRI), ultrasound, electromagnetic articulography (EMMA), electromyography, transducers for investigating velopharyngeal function (including aerometry, electromyography, various acoustic methods, radiography, endoscopy, photodetection, various mechanical devices, ultrasound, MRI, and EMMA), and techniques for investigating laryngeal articulation (including fibreoptic endoscopy, transillumination, electromyography, pulse-echo ultrasound, acoustic analysis with inverse filtering, glottography, and the Sondhi tube).
The final chapter of the book addresses use of the spectrograph and other acoustic tools in studying coarticulatory phenomena. This chapter gives examples of how to do acoustic analysis of formant transitions, the stable portion of a vowel, stop release, fricative noise, nasals, liquids and glides, voicing and tone, and duration and intensity. This is a laudable beginning, but there is room for much more to be done in this area.
While this book is overall very tight in structure and rich in content, it is not by any means the do-all, end-all work on coarticulation. There are a number of areas not covered in this book that I would like to have seen, and hope to see in future works, such as: what really happens between *words* in running discourse?
This book is a good beginning of more serious and concentrated work on coarticulatory phenomena than has previously been seen. Hopefully many more such studies will follow.