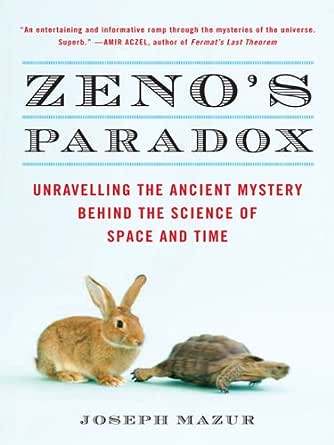 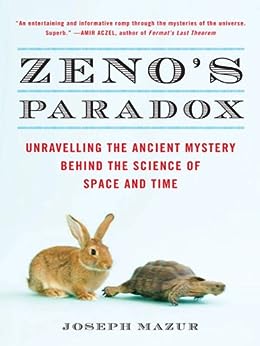 Zeno's Paradox: Unraveling the Ancient Mystery Behind the Science of Space and Time (English Edition) Kindle电子书

JOSEPH MAZUR is a professor of mathematics at Marlboro College, where he has taught a variety of classes in mathematics, including its history and philosophy. He received a Guggenheim Fellowship in 2006 and is the author of Euclid in the Rainforest, which was a finalist for the 2005 PEN/Martha Albrand Award for First Nonfiction. --此文字指其他 kindle_edition 版本。

A. Menon
4.0 颗星，最多 5 颗星 Exploration of Zeno's Paradox from ancient as well as modern lense
2013年2月3日 - 已在美国亚马逊上发表
已确认购买
Zeno's Paradox tends to be told from the perspective of the tortoise and the hare. The question is posed with the hare starting behind the tortoise at t=0, each time the hare runs the distance between the two, the tortoise would have moved forward by an amount equal to its slower speed multiplied by the time. As this process goes in ad infitum question becomes how can the hare overtake the tortoise despite the hare being faster? Asked another way, how can an infinite number of steps be finite. Zeno's paradox has a long history of analysis and the formal answer to the initial question was resolved several millenium later when it was realized that an infinite sum might still be a finite number. Joseph Mazur explores the topic yet again by questioning whether calculus based answers tell us what is happening in the physical world. It is an interesting book and does a good job describing mathematical history of analysis and the evolution of many ideas in physics. It is not really about zeno's paradox throughout and some parts are quite long winded but definitely it does a unique job of using an ancient question about the nature of reality and re-apply the logic to our understanding of the physical world today.

The book is split into 4 parts. The first sets the stage with ancient greece and describes zeno's paradoxs, which are several and discusses how the ancient greeks approached and debated the problems. The second part explores pre-calculus Renaissance and how the nature of physical reality and motion starts to be explored more rigorously with Galileo and Kepler. The third section describes the evolution of the math. Analytic geometry is discussed and the stage is set for Newton and Leibniz and the world enters the Enlightenment. The third section goes back to discussing physics and in particular modern theories of physics as well as classical relativity.

The motivation to use Zeno's paradox is, despite it being a mathematical problem, it implicitly asks what is the nature of space and time. How divisible is time, how divisible is space. Is the topology of space the same as the real line, which is the mathematical structure for which the answer to zeno's paradox was answered on? The book is a nice history lesson, as a philosophical enquiry i think its quite weak though. There is no answer's to zeno's paradox in an objective sense, if you assume that zeno's paradox is well posed because you can infinitely divide space and time then calculus gives the resolution. If you ask the question and then asks whether it is how nature really is and if nature isnt really like that, then the original paradox isnt well posed as the hare/tortoise relative steps would not be well posed at a certain point if space wasnt continuous. I enjoyed parts of the book as it is readable and easy to follow and brings up the history of thought on some of math and science's most important ideas. I dont think this is particular thought provoking with respect to Zeno's paradox and its relevance today though.