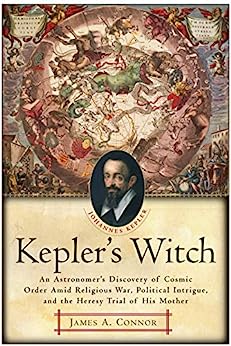 Kepler's Witch: An Astronomer's Discovery of Cosmic Order Amid Religious War, Political Intrigue, and the Heresy Trial of His Mother (English Edition) Kindle电子书

Set against the backdrop of the witchcraft trial of his mother, this lively biography of Johannes Kepler – 'the Protestant Galileo' and 16th century mathematician and astronomer – reveals the surprisingly spiritual nature of the quest of early modern science.

In the style of Dava Sobel's Galileo's Daughter, Connor's book brings to life the tidal forces of Reformation, Counter–Reformation, and social upheaval. Johannes Kepler, who discovered the three basic laws of planetary motion, was persecuted for his support of the Copernican system. After a neighbour accused his mother of witchcraft, Kepler quit his post as the Imperial mathematician to defend her.

James Connor tells Kepler's story as a pilgrimage, a spiritual journey into the modern world through war and disease and terrible injustice, a journey reflected in the evolution of Kepler's geometrical model of the cosmos into a musical model, harmony into greater harmony. The leitmotif of the witch trial adds a third dimension to Kepler's biography by setting his personal life within his own times. The acts of this trial, including Kepler's letters and the accounts of the witnesses, although published in their original German dialects, had never before been translated into English. Echoing some of Dava Sobel's work for Galileo's Daughter, Connor has translated the witch trial documents into English. With a great respect for the history of these times and the life of this man, Connor's accessible story illuminates the life of Kepler, the man of science, but also Kepler, a man of uncommon faith and vision.

“A fascinating book, analyzing a pivotal time in western intellectual history.” (John Shelby Spong, author of A New Christianity for a New World)

“A detailed and fascinating account of the life and times of one of the great founding figures of modern science.” (John Polkinghorne, author of Belief in God in an Age of Science)

“James Connor narrates the compelling human drama behind significant scientific discoveries of the seventeenth century.” (Eve LaPlante, author of American Jezebel: The Uncommon Life of Anne Hutchinson, the Woman Who Defied the Puritans)

“Connor has illuminated the life - and thus also the work - of one of history’s greatest star-gazers.” (David Edmonds and John Eidinow, authors of Wittgenstein's Poker and Bobby Fischer Goes to War)

“Connor’s skillful narrative brings to life an extraordinary man who wanted to know the mind of God.” (Kenneth Silverman, Pulitzer-Prize winner and author of Lightning Man)

“Kepler has received less than his due from rationally-minded scholars. This luminous biography will help remedy that injustice.” (Booklist - Starred Review)

James A. Connor is the author of Kepler's Witch: An Astronomer's Discovery of Cosmic Order Amid Religious War, Political Intrigue, and the Heresy Trial of His Mother and Silent Fire: Bringing the Spirituality of Silence to Everyday Life. A former Jesuit priest, Connor is professor of English at Kean University in Union, New Jersey; he has also held teaching posts at St. Louis University and Gonzaga University. He is a director of studies at the Lessing Institute in Prague. He holds degrees in geoscience, philosophy, theology, and creative writing, and a Ph.D. in literature and science. He is a prize-winning essayist published widely in such places as American Book Review, Traditional Home, Willow Springs, The Critic, The Iowa Review, and The Iowa Journal of Literary Studies.

Charlie Brennan
4.0 颗星，最多 5 颗星 A really good book with a somewhat misleading title
2022年5月11日 - 已在美国亚马逊上发表
已确认购买
I thought overall the book was good. There are a few cultural asides, but they were interesting. It touches on his mother's trial for witchcraft and their ordeal, but that's nowhere near the main focus of the book.
阅读更多