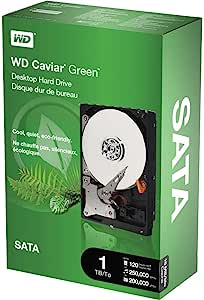 The initial use for this drive is to replace a Western Digital
74 GB boot drive on a Dimension XPS Gen 3 machine. Dell
Disk Diagnostics reported an Error Code 7 problem on the boot
drive. After downloading free software from the Western
Digital support site, and performing a software repair the disk appeared to function normally and passed all diagnostics. Simple data error or pending hardware failure? I'm not a risk taker. New drives are cheap, replacing the
programs and data is not.

Cabling and Software for the New Drive:

Note! If this is to be an additional drive, it is mandatory to
purchase a SATA data cable. The retail package contains
the drive itself and a pack of four screws with some minimal
documentation. The Dell is standard with power connections for
4 SATA drives so no worry there. The Western Digital site
carries cables at moderate prices, and Radio Shack has one
available in its stores for less than $10.00 (Part # 26-1142)
You may want to downloaded from the WD site a copy of Acronis
True Image (2009) software. The free WD version moves data
from any drive to a WD drive (only).

Easy and simple takes about 10 minutes. Open the HD bay
shroud, extract the two green rails and attach to the HD.
Push into the bay, connect the power and data cables. Replace
the shroud. Note! A SATA boot drive must be connected to the
lowest numbered enabled SATA connector. The procedure should
be similar in other units with SATA connectors.

With the original boot drive still in the computer, start the
True Image Software. If asked whether to format the new drive,
skip the procedure. Click the clone operation, automatic
option. The software offers a choice of formatted drives to
clone, and automatically selects the new "raw" drive as the
destination. Manual cloning offers many more options.
The cloning process took about 20 minutes. At the end I
rebooted, went into setup and disabled the SATA port for the
original boot drive. After exiting setup, Windows booted normally,
all of the installed programs were present and running
without a problem, no reinstall of anything was required. From the
Microsoft Office applications to McAfee to Digital Security
certificates, all was there and operating. The only
thing different is the 854 GB of free space on the C: drive.
Total time from opening the box to booting up the new drive
with everything transferred, about 40 minutes.

Speed and Noise of New Drive:

I have not yet run comparison tests on the new equipment, but
the "feel" is that the new drive loads the OS and other data
just as quickly, if not more so, than the 10,000 RPM drive it
replaced. It's so silent that one can forget its working. The
cooling fan is louder.

I'm not very technically proficient, so I'm going to need time
to device a good data management and backup system. I've
temporarily left the old drive in place, so I have three SATA
drives to play with, and there's probably a need for externals
drives as backup.

The drive is speedy, dead easy to install, and un-naturally
quiet. With the free True Image software, it's everything I
ever dreamed about in a Hard Drive. I'll update this later on with reliability
information. For now, though, I'd recommend this product
without reservation.
阅读更多
1 个人发现此评论有用

viiowe996
5.0 颗星，最多 5 颗星 Fast, quiet, and spacious
2011年1月20日 - 已在美国亚马逊上发表
已确认购买
If you're needing something faster and more hard core, move up to the higher faster model WD offers or blow your wad on solid state drives. For normal people and gamers this drive is just fine for today (beware the future, this review may be outdated by the time you read it) for pretty much everything. Western Digital has easy to download tools to test and clone drives right off the bat so it's a piece of cake to make sure your drive is in proper working order before taking any leaps. I've said this before about another WD drive I bought, but it's worth repeating:

In general Western Digital has been an excellent and reliable manufacturer of hard drives and after years of being a nerd both at home and professionally, it's the brand I trust. They have great diagnostic tools available for download to verify your drive's integrity upfront and clone your current drive if it's an upgrade or total backup situation. Every manufacturer of hard drives has their duds, that's life when dealing with high tech. As with any upgrade, back up your data first and regularly. If there are any problems WD has easy to use diagnostic tools that can sometimes fix minor issues and spit out RMA codes you can send to WD for replacement for major ones. The nice part is, with WD, the odds are low you'll ever have to worry about it. Drives have motors and sensitive material in them... they vary in wear and tear just like any other high tech devices of the same caliber. But for longevity I've had the best luck with WD. And their prices ain't bad either. I might sound biased, but after over a decade in the business, and drives of my own of various manufacturers dating back to the 80s... some which still work, I think I've earned my stripes to say so.
阅读更多

P. McGuire
5.0 颗星，最多 5 颗星 Inaudible, Super fast, and *Plenty* of Space
2008年4月3日 - 已在美国亚马逊上发表
已确认购买
My 320 GB WD Caviar was getting too full I did some searching around for a 1TB drive (as a secondary drive to my computer). Slashdot just happened to have an article on this drive the day I was looking to buy one. I was a little skeptical about the 5400 RPM but I was looking for a data drive not a OS drive.

Well, this drive is nice... It is as fast as my 320GB 7200rpm drives (just doing MP3 transfers). It only took like 10 seconds to do a Quick Format - as with all drives you won't get the full 1TB due to formatting but everyone knows that.

The drive is inaudible... I can't hear a THING - especially when using it. My old 320GB Western Digital Caviar clicked and clacked like the old 1GB drives ... So it is nice not having to listen to that anymore.

Being "green" is kinda cool too. Nothing like helping everyone out a little by buying something that uses less electricity.

Amazon Customer - Vista, CA
5.0 颗星，最多 5 颗星 Flawless install and runs quiter and cooler...
2008年11月5日 - 已在美国亚马逊上发表
已确认购买
Flawless install... been running for about two weeks in my HP ex470 Home Server with out powering down. Very quite, no access delays noticed and speed is as fast as other 1TB drives. One items to note on the temperature monitoring this drive runs about -12 degrees F. cooler consistently, And when all of the drives are working (non-Green) harder there is a greater span in temperatures. This will makes big difference as you start stacking more drives together with minimum airflow in servers and PC. I plan to replace my other drives with this green drive.
阅读更多
3 个人发现此评论有用

Mark C.
5.0 颗星，最多 5 颗星 Great hard drive
2011年3月17日 - 已在美国亚马逊上发表
已确认购买
I purchased two of these WD Caviar 1 TB SATA HD for a Linksys NAS system. I went with WD because I believe they have a good product and I talked to a systems guy who said WD was one of the best. My previous 500GB HD (one) died. I upped the size of my drive and put them in RAID configuration. After installation the drives performed great. I have had them about a month and have had no issues at all.
阅读更多
加入亚马逊Prime，从此免运费
亚马逊Prime会员可享海外购美/英/日/德跨境免邮，全年无限次！更有免费无限次阅读电子书服务
> 立即加入
了解我们
合作信息
帮助中心和购物指南