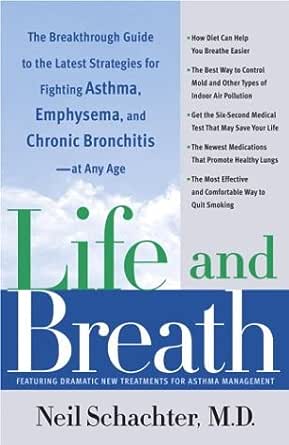 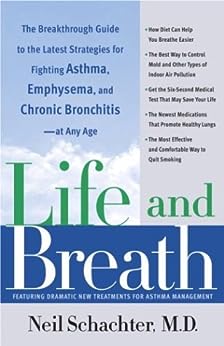 Life and Breath: The Breakthrough Guide to the Latest Strategies for Fighting Asthma and Other Re spiratory Problems -- At Any Age (English Edition) Kindle电子书

NEIL SCHACHTER, M.D., is a chaired Professor of Pulmonary and Community Medicine, Medical Director of the Respiratory Care Department, and Associate Director of the Pulmonary Division of the Mount Sinai Medical Center in New York City. Author of five books and more than four hundred articles on pulmonary disease, Dr. Schachter is past president of the American Lung Association of Medical Directors of Respiratory Care. He graduated from Columbia College and earned a medical degree at New York University Medical School. At Yale, he was appointed Director of Respiratory Therapy at Yale-New Haven Hospital, where he published his landmark research on the role of vitamin C in treating asthma.

Dr. Schachter is donating 25 percent of all earnings from this book to the American Lung Association of the City of New York in support of its educational and research programs. --此文字指其他 kindle_edition 版本。

I recognized Maxwell Harris immediately. It had been more than twenty years since I had been an undergraduate in his political science class. On a Columbia campus filled with intellectual all-stars, Maxwell Harris was a legend. He had been an advisor to every President since John Kennedy, and his bestselling books were classics in their field. But it was his personality and style that packed each seat in the large lecture hall. Compelling and articulate, he would sit at the lectern chain-smoking gold-tipped English Ovals. He would smoke each one down to the very tip and then, without taking a break, light the next cigarette with his last puff.

"My wife said she would divorce me if I didn't see a doctor about my cough," he told me as I examined him. "It keeps her up at night and she claims I'm banned from Lincoln Center for drowning out La Sylphide," he said with the same dry wit that charmed generations of students. "Can you give me a cough medicine that really works?"

But Professor Harris didn't have just a simple cough and he would need more than cough syrup. I had to tell my intellectual hero that he had chronic obstructive pulmonary disease or COPD.

He is far from alone. Over the years there has been a relentless rise in the number of cases of COPD throughout the world. In my practice at Mt. Sinai Medical Center in New York City, over 40 percent of my patients now suffer from this debilitating and frequently fatal disease. It is estimated that COPD affects 35 million Americans, but only half are aware that a lingering cough, chronic bronchitis, and shortness of breath are signs of this serious health problem.

On an international level, COPD affects more than 20 million people in Europe, almost 30 million in Latin America, and a staggering 258 million in Asia.

The Rise of an Equal Opportunity Killer

In the mid-1960s when I was in training at Bellevue Hospital, COPD was seen as a disease of old men. Most of my COPD patients were men in their sixties who had lived and played hard. Heavy drinkers with nicotine-stained fingers, they rattled windows with their coughs, keeping other patients up at night. One day I was on rounds with Dr. John McClement, the grand old man of chest medicine. In the 1920s, tuberculosis was arguably the leading public health problem in large cities in the United States. Director of the chest service at Bellevue, Dr. McClement was one of the people credited for bringing this once fatal and epidemic disease under control in New York City. That particular morning there had been more than the usual number of people with COPD admitted to the floor and there was some confusion about the patients. In their blue-and-white hospital gowns, and with their unshaven faces covered with oxygen masks, the four older men looked almost identical. "Maybe we should just number them," I joked with the insensitivity of a very young doctor.

Dr. McClement just nudged me with his elbow. "See those young women at the nursing station?" he asked, pointing to a group of nurses lighting up cigarettes with their morning coffee. "In twenty years, they too will be your patients," he predicted.

Unfortunately, he was right. Over the past two decades, I have seen a sharp rise in the number of people affected with COPD. No longer a disease of aged roues, my COPD patients include dancers, ambassadors, writers, teachers, and reporters. Even more troubling has been the startling increase in the number of women with COPD. Figures from The National Center for Health Statistics report that the rate of COPD has risen in women 100 percent since 1992.

Dr. McClement's prediction was especially ominous because of the importance that epidemiologists place on disease incidence in women. Epidemiology is the study of patterns of disease. Who they are and where people become ill provides critical clues that can help us prevent and cure illness. In any situation, there can be many possible causes of disease and one of the first clues is: "Look at the women."

In the past, men have been exposed to a greater number of environmental and other risk factors. They have until recently tended to drink more, smoke more, drive faster, use more illicit drugs, work in more dangerous environments, have a higher risk of heart disease, and been more likely to carry weapons. Teasing out which of these factors is affecting death and disease rates is complex and subject to partisan debate. For example, for decades it was the presence of these multiple factors that helped cigarette companies successfully avoid blame for tobacco-related health issues.

For a better picture of the cause and incidence of an illness, we frequently look at the health status of women. Historically, we have learned that a rise in the number of women affected is a sign that a disease is spreading more rapidly. During my years at Bellevue, I can remember only a handful of women who were diagnosed with COPD. In the years that have followed, Dr. McClement's prediction has slowly but steadily come true. Today almost half of the people with COPD are women, a sign of equality no one ever wanted to see.

I am particularly frustrated that by the time both men and women come to my office, many have had COPD for five to ten years. During that time, their lungs have suffered serious and irreversible damage. There is so little awareness of COPD that it often takes a major health crisis to get them the health care they need. It is especially troubling because we have learned so much about the underlying dynamics of the body's airways and have translated this knowledge into effective care strategies. We have developed a wide range of medications that control symptoms and may slow loss of lung function. We have identified pollutants in our environment and developed filters to clean our homes and offices. Now we have even identified the role of diet and the importance of antioxidants for pulmonary health.

This book, Life and Breath, allows me an incredible opportunity to alert you to potentially serious health problems while there is still time to take the necessary steps to relieve symptoms and prevent further damage. In addition to alerting people who already have COPD, I am equally concerned about reaching the 95 million current and former smokers in America who are at increased risk for developing COPD. Life and Breath will offer step-by-step practical programs for diet, exercise, medical care, and environmental protection that will yield long-term protective and preventive measures.

Life and Breath is particularly important for the 26 million Americans with asthma. This is the first book to explain how asthma, once seen as a separate disease, can lead to COPD, even in people who have never smoked cigarettes. This book will offer simple yet effective advice to prevent the development of chronic irreversible pulmonary symptoms in asthmatics.

COPD occurs when airflow is reduced through the lungs due to the development, either singly or in combination, of chronic bronchitis and emphysema. Chronic bronchitis is defined as a chronic "wet" cough that occurs for months at a time, two years in a row. Emphysema is an abnormal permanent enlargement of the air sacs (called alveoli) in the lungs. This damage eventually causes severe shortness of breath and wheezing.

Historically, asthma was considered a separate disorder from these. Asthma was regarded as an acute but reversible problem, primarily seen in younger patients and linked to allergies. Once the asthma attack passed, lung function was felt to return to normal. By contrast, COPD was considered a chronic, progressive disease, usually occurring after age fifty and closely linked to cigarette smoking. In recent years, we have changed our perceptions and now see asthma as part of COPD. Along with my pulmonary colleagues, I began to see a widespread pattern among asthmatics suggesting that they were developing true irreversible pulmonary constriction characteristic of COPD. While asthma was supposed to disappear between attacks, we saw people developing the chronic shortness of breath once thought to be characteristic of emphysema and chronic bronchitis. Our observations were backed up with laboratory tests. We found that people with asthma were showing the same permanent decline in lung function normally seen in classic COPD patients. It is now clear that asthma is a true member of the COPD family. In fact, it is not uncommon for a patient to have a combination of asthma, bronchitis, and emphysema.

These findings are not just of academic interest but have a critical impact on health care. When asthma and COPD overlap, we need to take a different approach to managing symptoms and preventing permanent lung damage. Although the symptoms can be very similar, the underlying cellular and biochemical changes are different and it is important to adjust your care to take these differences into consideration. For example, "asthmatic COPD" often has a strong allergic component that needs to be treated for maximum symptom control.

Could I Get COPD?

To measure personal COPD risk, ask yourself these questions:

*Did you start smoking as a teenager?

*Did you grow up in a household where one or more of your parents smoked?

*Do you now smoke at least ten cigarettes a day? Did you do so in the past?

*Have you ever been told that you have asthma?

*Do other members of your family have allergies?

*Do you have allergies?

*Does anyone in your close family have asthma?

*Did you get frequent colds as a child?

*As an adult, do colds tend to develop into a lingering cough?

*Do you quickly get out of breath when you run?

*Do you become short of breath when you climb a flight of stairs?

*Does your chest feel tight in cold weather?

*Do you live or work near electrical power plants or other smokestack industries?