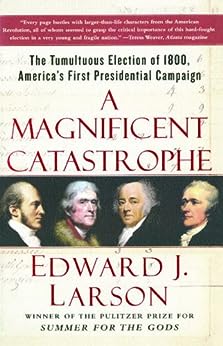 "They could write like angels and scheme like demons." So begins Pulitzer Prize-winner Edward Larson's masterful account of the wild ride that was the 1800 presidential election—an election so convulsive and so momentous to the future of American democracy that Thomas Jefferson would later dub it "America's second revolution."

This was America's first true presidential campaign, giving birth to our two-party system and indelibly etching the lines of partisanship that have so profoundly shaped American politics ever since. The contest featured two of our most beloved Founding Fathers, once warm friends, facing off as the heads of their two still-forming parties—the hot-tempered but sharp-minded John Adams, and the eloquent yet enigmatic Thomas Jefferson—flanked by the brilliant tacticians Alexander Hamilton and Aaron Burr, who later settled their own differences in a duel.

The country was descending into turmoil, reeling from the terrors of the French Revolution, and on the brink of war with France. Blistering accusations flew as our young nation was torn apart along party lines: Adams and his elitist Federalists would squelch liberty and impose a British-style monarchy; Jefferson and his radically democratizing Republicans would throw the country into chaos and debase the role of religion in American life. The stakes could not have been higher.

As the competition heated up, other founders joined the fray—James Madison, John Jay, James Monroe, Gouverneur Morris, George Clinton, John Marshall, Horatio Gates, and even George Washington—some of them emerging from retirement to respond to the political crisis gripping the nation and threatening its future.

Drawing on unprecedented, meticulous research of the day-to-day unfolding drama, from diaries and letters of the principal players as well as accounts in the fast-evolving partisan press, Larson vividly re-creates the mounting tension as one state after another voted and the press had the lead passing back and forth. The outcome remained shrouded in doubt long after the voting ended, and as Inauguration Day approached, Congress met in closed session to resolve the crisis. In its first great electoral challenge, our fragile experiment in constitutional democracy hung in the balance.

A Magnificent Catastrophe is history writing at its evocative best: the riveting story of the last great contest of the founding period.
阅读更多
›  查看更多商品促销信息

"In this absorbing, brisk account, Larson re-creates the dramatic presidential race of 1800...an invaluable study of a crucial chapter in the lives of the founding fathers -- and of the nation." -- Publishers Weekly

"Edward Larson...captures the drama -- and complexity -- of this pivotal event in American history....He is scrupulously fair and balanced." -- Glenn C. Altschuler, Philadelphia Inquirer

"Larson... provides one of the finest insights ever written into the history of the founding -- and sometimes faltering -- first steps of our modern democratic republic." -- Thom Hartmann, BuzzFlash.com (Book of the Month Review)

"Through Larson's story, the reader can see the two-party system forming itself." -- Bruce Ramsey, Seattle Times

"The best book I've seen so far to prompt reflection on what we're doing as we prepare to elect a new president." -- John Wilson, Books and Culture --此文字指其他 kindle_edition 版本。

CHAPTER ONE: From Friends to Rivals

CHAPTER SEVEN: For God and Party

Edward J. Larson is the author of seven books and the recipient of the 1998 Pulitzer Prize in History for his book Summer for the Gods: The Scopes Trial and America's Continuing Debate Over Science and Religion. His other books include Evolution: The Remarkable History of a Scientific Theory; Evolution's Workshop; God and Science on the Galapagos Islands; and Trial and Error: The American Controversy Over Creation and Evolution. Larson has also written over one hundred articles, most of which address topics of law, science, or politics from an historical perspective, which have appeared in such varied journals as The Atlantic, Nature, Scientific American, The Nation, The Wilson Quarterly, and Virginia Law Review. He is a professor of history and law at Pepperdine University and lives in Georgia and California. --此文字指其他 kindle_edition 版本。
阅读更多

Hal Jordan
5.0 颗星，最多 5 颗星 Eye opening
2020年1月30日 - 已在美国亚马逊上发表
已确认购买
I think most people are aware of how bitterly contested the 1800 presidential election was. But I had no idea how deep the divisions between Federalists and Republicans (ancestors of today's Democrats) were. The Republicans apparently had some reason to fear that a faction of "High Federalists"--notably Alexander Hamilton and his followers--favored, if not a monarchy, then at least life tenure for the president and members of the Senate. And Federalists had some reason to fear that the Republicans saw the French Revolution as a model for what should occur in the United States.

Larson does an excellent job of recounting the political in-fighting and the complex way it played out in the run up to the 1800 election. The book is mercifully brief at 276 pages of text and moves at a crisp pace.

Apart from its inherent interest, the story of this period is worth pondering for the light it throws on current politics. It's a cliche to write that we are currently a sharply divided nation. Our divisions today are nothing compared to the political divisions during this period.
阅读更多
2 个人发现此评论有用

roxanne feline
3.0 颗星，最多 5 颗星 The Roots of Partisanshp
2015年6月27日 - 已在美国亚马逊上发表
已确认购买
John Adams is president and the federalist candidate, but so thoroughly disliked that his own party was defecting to Pinckney. Alexander Hamilton plays a big role on the federalist side, but he has already climbed to power and influence, so is not as interesting as he probably was earlier in his life. Jefferson is Democratic Republican candidate, living on his plantation at Monticello, maintaining the "natural increase" of his slaves. Both were self-serving schemers in an era when revolutionary patriotism had given way to concerns of money and station and the partisanship which continues to this day had already taken root. The constitution had already shown itself to be inadequate in such an environment, and the Twelfth Amendment would be the result.

This book is anti-climactic as early voting in New York City decided the presidential election and Larson has difficulty building interest in the rest of the campaign.
阅读更多
3 个人发现此评论有用

Retired Reader
4.0 颗星，最多 5 颗星 An Experimental Republic
2008年7月9日 - 已在美国亚马逊上发表
已确认购买
In 1800, the Republic of the U.S. was still very much a work in progress. That wonderful blueprint for government, the U.S. Constitution, was only 12 years old and its applications to the realities of governance were still being worked out. In short the U.S. in 1800 was still in its experimental and formative stage.

This admirable book is focused on the 1800 Presidential election for two very good reasons. First the election was the first truly contested election in the U.S. involving two competing aggregates of political ideologies that were the first nascent political parties in America. Second it was this election that more or less established the operational pattern for presidential elections that has held down to this day. Indeed as, Larson describes it, this election had a very modern feel to it.

This book is especially good about the complexities of both the electoral process and the so-called Federalist and Republican factions. The Federalist had the advantage in that John Adams, the incumbent President, was a member. This advantage was mitigated by the fact that Adams was seen as too pragmatic (i.e. compromising) to be willing to fully buy into the Federalist ideology as advocated by the so-called `high federalists'. Brilliant, but erratic Alexander Hamilton, was the chief ideologue of the high federalists. He undermined the Federalist chance of victory by working behind the scenes to replace Adams with a more ideologically sound candidate. Oddly enough the Republicans were also faced with internal dissention. At this time there were actually two Republican Parties, the Virginia Party whose chief ideologue was Thomas Jefferson and the New York Republican Party whose principal was the very pragmatic (and ambitious) Aaron Burr. James Madison, the actual founder of the Republican Party was very much in the shadow of Jefferson. So the odds were pretty even between the two parties with the Federalists generally being stronger in the North East and the cities and the Republicans in the South and West and among rural voters.

How this election played itself out and the astonishingly modern maneuvering by both sides makes for fascinating reading. A word to the wise, however, modern as this election was in many ways, it is a mistake to follow Larson's example and try to affiliate Federalists and Republicans to modern political parties. In spites of its modern trappings the Presidential Election of 1800 occurred in a vastly different country than the one we live in today.
阅读更多
3 个人发现此评论有用