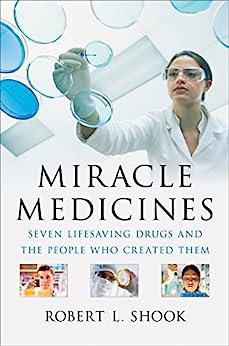 Miracle Medicines goes behind the scenes of the pharmaceutical industry and into the high-security laboratories to tell the stories of the men and women---chemists, physiologists, medical and clinical researchers, engineers---who have chosen to toil for years in the lab in order to transform scientific theories into new lifesaving medicines.

You’ll witness the day-to-day labors, victories and defeats of the dedicated professionals who are waging a war against the diseases that still plague mankind. From the confines of their laboratories, these pharmaceutical adventurers explore unknown territories in health and science.

Miracle Medicines reveals what really happens during the long and uncertain journey that each new drug and its creators must endure from theory, to research, to testing and, finally, FDA approval and delivery to the public. It’s a very human story within the context of fascinating scientific innovation.

Through first hand interviews you’ll also meet the patients who benefit from these manmade miracles and learn how, within their bloodstreams, an ongoing battle is raging. The drugs profiled are:
This compelling and truth-revealing book will forever change the way you view the medicines in your medicine cabinet, and the people who create them.
阅读更多
›  查看更多商品促销信息

Gracie Lou
3.0 颗星，最多 5 颗星 lost in shipping
2010年5月22日 - 已在美国亚马逊上发表
已确认购买
even with expedited shipping, the book was not shipped immediately. then, package was never delivered - tracking information said the package was undeliverable. money was refunded.
阅读更多

Robert L. Shook, Author
5.0 颗星，最多 5 颗星 The Truth about Big Pharma
2007年3月18日 - 已在美国亚马逊上发表
For years, the media has been knocking Big Pharma,and many of us are be duped into believing that the pharmaceutical companies are deceptive, devious and inhererently evil. Even the movie, "The Constant Gardener," a fictious story, has influenced public opinion to think that Big Pharma will do anything for the almighty dollar.

Robert L. Shook, a highly respected independent business writer, with no ties to the pharmaceutical industry has penned an eye-opening book that takes the reader behind the scenes of seven companies--Abbott, AstraZeneca, Eli Lilly, GlaxoSmithKline, Johnson & Johnson, Novartis amd Pfizer to meet the real people who dedicate their lives to finding cures for diseases. In doing so, Shook puts a face on these dedicated men and women, most of whom spend their entire careers working in their labs without ever having a new drug ending up in our medicine cabinet. After reading MIRACLE MEDICINES, my take on these individuals is that they are truly committed to humankind. They are hard-working, decent people who spend their lives to benefit others. As the author states, these are highly educated people, many who have medical degrees and Ph.Ds and could earn far more in private practice or working elsewhere. Why do they work for pharmaceutical companies? To paraphrase one chemist in the book, "I could have made more money working for a chemical company, but I wanted to work where I could do the most good for humankind."

The author does an excellent job in presenting an otherwise very complicated subject in a way that can be enjoyably read by all. This is a tribute to his writing skills. The book is very informative and interesting to read. I recommend that you buy it.

Ravela
5.0 颗星，最多 5 颗星 Putting this in perspective
2007年3月21日 - 已在美国亚马逊上发表
There are two elements to any industry. Research and making money. At no point we should question the integrity of people who do everything they can to find cures for human ailments. This book tells all that. In this world of Wall Street expectations to show quick and continuous profits, some times, Pharma companies might make some bad judgment calls and those decisions cause more harm than anything. Pharma is being criticized for its practices in drug research with all the myths and lies, and at the same time pushing those companies to produce and show quick returns on stock market so that investors can make quick profit without realizing the effort that goes into the research, clinical trials and marketing of a drug. Drugs are not commodities and only that realization can put things perspective to everyone.
阅读更多

...
5.0 颗星，最多 5 颗星 Wonderful message--a must read book
2007年3月12日 - 已在美国亚马逊上发表
Everyone lately has been attacking Big Pharma and at last an author has written a positive book about one of the world's most important industries. Robert L. Shook's Miracle Medicines discloses what every American needs to know about what our big pharmaceutical companies do that results in saving millions of lives and relieves pain and suffering for still millions and millions more people. Yes, people complain about the high cost of medicines, but what's a drug worth that inhibits HIV or a terrible cancer? Shook tells the story of Humalog, a manmade insulin produced by Eli Lilly that controls diabetes. This medicine costs only a couple of dollars a day, but without it, or another insulin, all diabetics would be doomed to suffer a horrendous slow death by eventual starvation. So for less than the cost of a Big Mac each day, I think this drug is an incredible value. Another medicine that's featured in this book is Remicade, a biotech medicine made by Johnson & Johnson. The story of this medicine reads like fiction. Against all odds, its scientists and company executives refused to accept defeat. Remicade is truly a miracle medicine. It inhibits diseases that attack our immune systems. Taken by infusion, only a few times a year, it relieves the pain and agony of rheumatoid arthritis, and later it was approved for other indications including Crohn's disease, ankylosing spondylitis, psoriasis and ulcerative colitis.

There is also the story that the author tells about Gleevec, a drug that he calls a designer medicine that targets cancer cells. Yes, the scientists at Novartis figured out how to make a molecule that goes into the cell and hits a specific defective chromosome causes a rare form of chronic myeloid leukemia (CML). The story about Gleevec is one of the truly great medical advances in modern times. Most important, this breakthrough medicine will open the door for other advances in the fight against cancer..

After I read this book, I walked away with a new respect for Big Pharma. So what if these companies make a lot of money. Considering the good they do for humankind, they deserve it.
阅读更多
3 个人发现此评论有用
加入亚马逊Prime，从此免运费
亚马逊Prime会员可享海外购美/英/日/德0门槛跨境免邮，更有会员专享折扣！
> 立即加入
了解我们
合作信息
帮助中心和购物指南