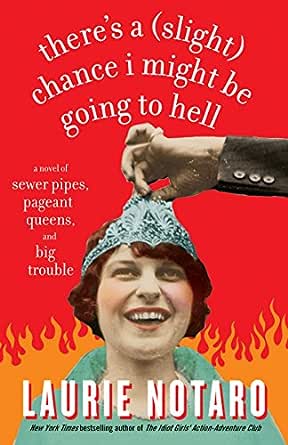 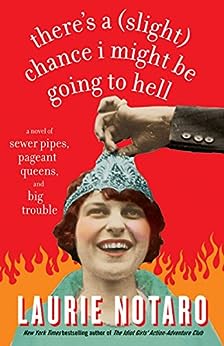 There's a (Slight) Chance I Might Be Going to Hell: A Novel of Sewer Pipes, Pageant Queens, and Big Trouble (English Edition) Kindle电子书

Prologue
SPRING, 1956
The moment the girl stepped onto the stage, the circle of a
spotlight swung toward her, announcing her presence
above the audience in a sheer, clean illumination. The crowd before
her suddenly quieted, as if expecting something truly spectacular
to occur. It would have to be spectacular; after all, Mary
Lou Winton, the contestant before her, had let loose a greased
baby pig onstage, which she managed to lasso, hog-tie, and
brand—with a branding iron fashioned to look like a sewer pipe,
no less—in a definitive nine seconds flat. It was, in fact, confirmed
by the audience, who counted down as Mary Lou whipped
that rope and then stomped over to plunge the glowing iron. And
it was further rumored that Ruth Watson was planning to bring
her rifle out onto the stage and shoot every winged fowl right out
of the sky, all in her evening gown attire, for her talent segment.
Farm antics, the girl scoffed to herself, wondering if such a
thing really could be considered as a talent or just an episode of
unfortunate breeding. She knew she could not let any of that
concern her as she looked out over the crowd, searching the
faces. She knew almost everyone—everyone who was waiting to
hear her sing.
She smiled softly, an expression that seemed gentle.
If only I had ruby slippers, she thought to herself. The light
that would have caught them would have been astounding, the
sparkle would have bounced off of them like rockets, far more
impressive than an oily piglet or dead birds. She looked down at
her feet, at her pair of last year’s Sunday shoes—now buffed a
bright cherry red by her father, who had been so proud when he
surprised her with them—and saw that they did not sparkle, but
produced a dull, minuscule shine.
Behind her, she heard Mrs. A. Melrose from the church choir
begin playing the piano; this was her cue, and the pianist had
better keep time. Although she considered herself a devoted
Christian woman overflowing with generosity, Mrs. Melrose
thought little of donating her time to the endeavor and suggested
that instead she exchange her musical services for the girl’s scrubbing
a week’s worth of the accompanist’s and her flatulent husband’s
laundry. Despite the gruesome task that lay ahead in the
Melroses’ wash bin the next day, the girl continued to smile as she
drew a deep, full breath, so full that the replica blue gingham
pinafore fashioned from a picnic tablecloth seemed to expand
slightly, making the ketchup stains that stubbornly remained on
the cloth look like she had encountered Ruth Watson’s rifle. She
waited: one, two, three.
The next note was hers. She was ready.
“Somewheeeeere over the rainbow . . .”
Her voice glided sweetly over the stage into the audience and
twirled in the air above them like magic. She could see it on the
faces of the people watching her, listening to her, heads tilted
slightly to the side, as they smiled back at her. This was no pig
roping event, and no explosion of feathers was going to trickle
down from the clouds.
This was talent.
I have it, she thought giddily to herself as she finished the first
verse, as her voice continued on clear, strong, and with the right
touch of delicacy. It is mine.
She saw him, standing in the back, far beyond the crowd assembled
in the square—the most handsome man she had ever
seen in real life, the one who could save her. With a bouquet
spilling with flowers in the crook of his arm, he leaned up against
his brand-new powder-blue Packard Caribbean convertible with
its whitewall tires and gleaming, curvaceous chrome bumpers. It
was a glorious machine. It suited him. Cars like that were rare in
this town, and so were the men they suited. She saw him smiling
at her, and to her he delivered a nod of encouragement.
She felt herself blush a shade. The surge of delight was just the
push she needed to soar into the last verse and deliver with
earnest, heartfelt yearning, “Why, oh, why can’t I?”
The moment the last note evaporated into the air, the crowd
burst forth with a shower of applause, the hands of the audience
clapping heartily, and as she looked toward the back of the
crowd, she saw that he was clapping, too, his arms full of tulips,
roses, and lilies. Clapping for her.
Excitement raced up her spine like a block shooting up to hit
the bell on a Hi Striker carnival game.
It was hers, she had done it, she knew it, she owned it. She
could actually feel the weight of the crown being placed on her
head, she could foresee the way that it would sparkle. She wanted
it to sparkle brightly, feverishly, ferociously. Sparkle so bright it
would blind them. Show this town that she was the queen of this
scrap heap, this tiny little town with nothing in it but sewer pipes
and waste. From this moment, it was all hers, all of it. If she wanted ruby slippers, she would get ruby slippers, not last year’s fake, cheap Sunday shoes painted red with a dirty rag. She was
more than that.
It was hers, the crown, the town—she had won and she would
take it. She knew it like she had never known anything else. As if
there was any other choice! The pig tosser, the bird slayer? This
was now her town, her kingdom.
To reign as she saw fit.
She smiled sweetly again, then closed her eyes slowly, laid her
arm over her chest, holding her hand to her heart the way she
had seen it done in the movies, and crossed one leg deeply behind
the other in what could only be described as a true queenly
and magnificent gesture.
And with that, she took a bow. --此文字指其他 kindle_edition 版本。

Laurie Notaro has been fired from seven jobs, laid off from three, and voluntarily liberated from one. Despite all that, she has managed to write a number of New York Times bestselling essay collections. She lives with her husband in Oregon, where—according to her mother, who refuses to visit—she sleeps in a trailer in the woods. --此文字指其他 kindle_edition 版本。
click to open popover

Dora L. Davison
4.0 颗星，最多 5 颗星 There’s a (Slight) Chance I Might Be Going to Hell
2019年6月24日 - 已在美国亚马逊上发表
已确认购买
Laurie Notaro has given us an intrepid protagonist in Maye. Maye has moved away from all her friends to go with her husband to his dream job as an English professor. The move works well for her husband who is well-received by his colleagues but Maye finds it hard to make friends. Her neighbor is the recycling Nazi. She tries to join a book club but finds out that they are witches. She tries to befriend her local bookseller but finds out that she is an obnoxious light weight drunk. Joining the Veg Out group turns out to be a mistake when the leader finds out that she eats meat.

At the suggestion of her realtor’s friend she decides to enter the Spaulding Sewer Pipe Queen contest. She decides to try to find Ruby Spicer, a former queen, to be her sponsor. She also finds out that Ruby was suspected of setting fires that burned down much of the town of Spaulding.

This story has enough quirky characters to keep the plot moving. It was humorous but what happens to Ruby at the end of the story is not satisfying. Overall a good read.

Happygram
5.0 颗星，最多 5 颗星 A Quirky, Funny Delight!
2019年7月21日 - 已在美国亚马逊上发表
已确认购买
Maye is so relatable, so real. A full figured gal whose sense of humor, often self-deprecating, but totally fitting and hilarious, had me laughing out loud so many times. Her story is one with which most can identify--coping with a life changing move car away from lifelong close friends and family, for her husband's career, accepting the losses graciously, while trying to find new friends in an odd town where she can't quite fit in. Her efforts are thwarted by one bizarre set of circumstances after another, but despite some painful and embarrassing moments, Maye persists and eventually finds a kindred spirit and in doing so solves a longstanding mystery and helps right a terrible wrong. Thoroughly enjoyed this. Interesting characters, good plot and pacing, satisfying ending, and a great doggy, too.
阅读更多

Kindle Customer
5.0 颗星，最多 5 颗星 Entertaining
2020年5月15日 - 已在美国亚马逊上发表
已确认购买
When I first started reading this I kept thinking Maye is an idiot. She did do some outrageous things when she and her husband, Charlie, moved to the small town in the state of Washington. I always loved small towns, but that town? There are a lot of strange people living there. Maye wants a friend, but meeting people in Spaulding is not easy. When she decides to compete for sewer pipe queen, she needs a sponsor. She finds the most notorious of ex-queens to sponsor her. And what a pair they become. There are some funny parts and some sad parts. But this is a wonderful, entertaining read.
阅读更多

Rita M. Reali
5.0 颗星，最多 5 颗星 It's not easy to make me laugh out loud... but this book did it – a lot!
2019年7月8日 - 已在美国亚马逊上发表
已确认购买
Laurie Notaro's writing style is fresh and fun. Her characters are larger than life and the situations they find themselves in are often simultaneously cringeworthy and hilarious. It takes a special kind of humor to make me laugh aloud once... but I can't count the times this story made me burst into guffaws – I simply didn't have enough fingers and toes to keep track. :)

If you need a read that'll make you laugh and cheer for the underdog (and gasp out loud in surprise several times at its unexpected turns), then this is the book for you. It's a wild romp that will leave you cheering and wanting more.

Christina Paquin
4.0 颗星，最多 5 颗星 laugh out loud funny for the most part.
2019年6月29日 - 已在美国亚马逊上发表
已确认购买
Very unique. I loved the book and it was very funny, I could barely put it down because it was indeed a page turner . The characters were awesome and colorful. There were parts of her writing I didn't like but that could be just be my personal taste, mostly in the first fifty or so pages. I found some of her passages dragged because of all the imagery and long drawn-out sentences. One sentence was almost a whole paragraph. The author loves hyperboles, which can get old if you use them too much. But all in all, I loved the book. I would read more if her Ebooks were cheaper.
阅读更多
加入亚马逊Prime，从此免运费
亚马逊Prime会员可享海外购美/英/日/德跨境免邮，全年无限次！更有免费无限次阅读电子书服务
> 立即加入
了解我们
合作信息
帮助中心和购物指南