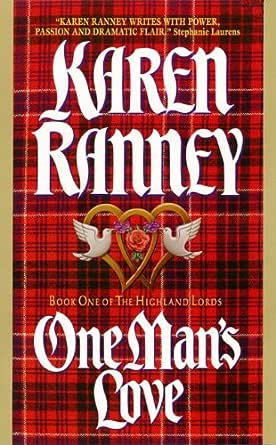 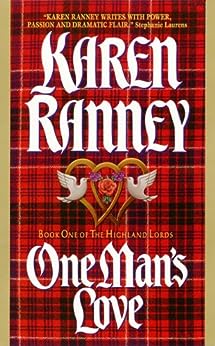 One Man's Love: Book One of The Highland Lords (English Edition) Kindle电子书 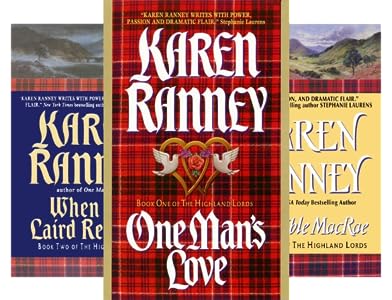 "A writer of rare intelligence and sensitivity." -- Mary Jo Putney

Karen Ranney began writing when she was five. Her first published work was The Maple Leaf, read over the school intercom when she was in the first grade. In addition to wanting to be a violinist (her parents had a special violin crafted for her when she was seven), she wanted to be a lawyer, a teacher, and, most of all, a writer. The violin discarded early, she still admits to a fascination with the law, and she volunteers as a teacher whenever needed. Writing, however, has remained an overwhelming love of hers. She loves to hear from her readers -- please write to her at karen@karenranney.Karen Ranney lives in Texas. --此文字指其他 kindle_edition 版本。
click to open popover

Judge Tabor
5.0 颗星，最多 5 颗星 Half Scot, Half English Ian MacRae Returns to Scotland Following Culloden and Finds His Long Lost Love
2015年10月27日 - 已在美国亚马逊上发表
已确认购买
This one grabbed my heart. I decided to read some of Karen Ranney's older books and realized she had a five book series of which this book is the first. I have a really difficult time reading about the country of Scotland and the inhabitants during the era leading up to, during and immediately following the battle of Culloden and yet, it seems I can't resist some of the books written about this period. One of my all time favorite books based on this time in history is The Pride of Lions (Scotland Trilogy Book 1) and of course if you can take a bit of time travel, there's also Outlander: A Novel (Outlander, Book 1) which is the book that is responsible for getting me back into historical romance novels following a 20 year long break.

This first book in Ms. Ranney's series doesn't come close to the two above, but it's still a very sweet read so I'm giving it five stars just because. The story of the young Ian MacRae - half Scottish and half English - forever torn between his heritage with his father being an English Earl and his beautiful mother being the daughter of the laird of the MacRae Clan, one wonders how he will ever find his way through the maze.

Eleven year old Ian and his mother spend two months of each year at the Gilmuir castle, the stronghold of the MacRaes' where he is fast friends with siblings - Fergus, James and Leitus. Young Ian loves Leitus with a steadfast love. Then, during one of their visits, tragedy strikes and Ian's life will never be the same. His heart is torn asunder and he leaves, determined to leave his Scottish heritage behind.

Years pass, Culloden happens, Ian returns to Gilmuir, except Gilmuir is now a ruin - Fort William having been built from the stones and rubbish of the castle. Ian is now known as the Butcher of Iverness - a title which was given to the man who sent so many Scots to the gallows following Culloden. But, is that title deserved? When Ian and Leitus meet after all the years apart, both the reader and Leitus have the opportunity to learn together how Ian has struggled with his mixed heritage during all his years of service. Who is the real Ian? Is he the "Raven" - a masked man who helps the Scottish people by giving them food and shelter? Is he Colonel Landers, the Butcher of Iverness? Is he a mixture of the two? It's an intriguing, sweet love story. Ian's tenderness toward Leitus is presented in a swoon worthy manner.
阅读更多
3 个人发现此评论有用

Sandy Milan
4.0 颗星，最多 5 颗星 Very poignant tale
2014年5月18日 - 已在美国亚马逊上发表
已确认购买
I'm going to confess at the outset that I avoided this book for awhile. I must've known it wouldn't be an easy read, especially judging by the mixed reviews. It is the first book in the Highland Lords series but I'm glad I didn't read it first, else I might've been tempted not to continue. It isn't a light, easy read but it is very real and it describes a particularly difficult time in Scottish history.

+++Minor spoilers+++
One of the negative reviewers laments the inconsistencies of the H's dual character but for me, the author does a great job of explaining why the h didn't see them. She developed the relationship between the H and h well and relied heavily on their pasts.

I cried at the very beautiful ending and I'm now going to go on and read the others in the series.
阅读更多
4 个人发现此评论有用

rushie86
5.0 颗星，最多 5 颗星 you find yourself cheering Alec/Ian on as he goes against what he thought he believed all those years, and faced the truth
2015年3月3日 - 已在美国亚马逊上发表
已确认购买
Argghhh, my heart aches for Alec/Ian, and what he had to live with, and what he eventually have to fight for. Yes, you would love love love the storyline if you appreciate history, especially of Scotland. Somehow, when Ms Ranney writes on and about Scottish and the lairds, i am pulled back in time. I could see the colours, the chaos, the fights, the intensity of the two characters so in love you cannot pull them apart. Beautifully written.
阅读更多
2 个人发现此评论有用

Amazon Customer
4.0 颗星，最多 5 颗星 a very good beginning for the the highland lords series
2015年2月2日 - 已在美国亚马逊上发表
已确认购买
Both the hero and hero were portrayed with human characteristics. they were honorable and conflicted with their consciences. learning not to hate the English nor the Scots but realizing both were flawed as humans are. The story was well done relating many problems during a difficult time during Scotland and it's people.
阅读更多
2 个人发现此评论有用
加入亚马逊Prime，从此免运费
亚马逊Prime会员可享海外购美/英/日/德跨境免邮，全年无限次！更有免费无限次阅读电子书服务
> 立即加入
了解我们
合作信息
帮助中心和购物指南