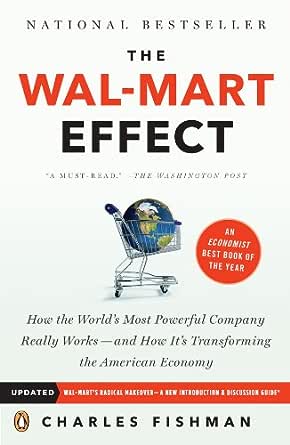 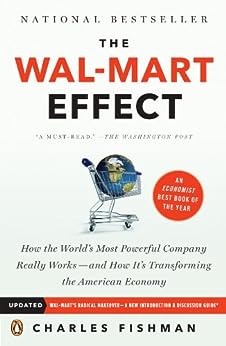 From Publishers Weekly
Fishman shops at Wal-Mart and has obvious affection for its price-cutting, hard-nosed ethos. He also understands that the story of Wal-Mart is really the story of the transformation of the American economy over the past 20 years. He''s careful to present the consumer benefits of Wal-Mart''s staggering growth and to place Wal-Mart in the larger context of globalization and the rise of mega-corporations. But he also presents the case against Wal-Mart in arresting detail, and his carefully balanced approach only makes the downside of Wal-Mart''s market dominance more vivid. Through interviews with former Wal-Mart insiders and current suppliers, Fishman puts readers inside the company''s penny-pinching mindset and shows how Wal-Mart''s mania to reduce prices has driven suppliers into bankruptcy and sent factory jobs overseas. He surveys the research on Wal-Mart''s effects on local retailers, details the environmental impact of its farm-raised salmon and exposes the abuse of workers in a supplier''s Bangladesh factory. In Fishman''s view, the "Wal-Mart effect" is double-edged: consumers benefit from lower prices, even if they don''t shop at Wal-Mart, but Wal-Mart has the power of life and death over its suppliers. Wal-Mart, he suggests, is too big to be subject to market forces or traditional rules. In the end, Fishman sees Wal-Mart as neither good nor evil, but simply a fact of modern life that can barely be comprehended, let alone controlled.
Copyright © Reed Business Information, a division of Reed Elsevier Inc. All rights reserved.

From AudioFile
Do you shop at Wal-Mart, or avoid it like the plague? THE WAL-MART EFFECT may change your shopping habits, and it most certainly will affect your perception of economics and business practice today. Charles Fishman takes a hard look at supply, demand, and pricing, as well as business practice as developed by Sam Walton, and now his children. Alan Sklar brings his narrating experience in reading nonfiction to bear on this "tell all" book. Sklar approaches each revelation with fresh enthusiasm, even when Fishman''s text is repetitive. Delving into Wal-Mart''s secrets will change your perception of marketing and business forever. M.B.K. © AudioFile 2006, Portland, Maine-- Copyright © AudioFile, Portland, Maine

The Christian Science Monitor
The Wal-Mart Effect saunters through the influential economic ‘ecosystem’ that the discount chain represents with clarity, compelling nuance, and refreshing objectivity.

The Washington Post
A must-read if one is even to begin understanding the global dominance of Wal-Mart. --此文字指 hardcover 版本。

Charles Fishman is a senior editor at Fast Company. In 2005 he was awarded the prestigious Gerald Loeb Award, the highest award in business journalism, and he had been a finalist for the Loeb in three of the last four years.

In 2004 his story about Wal-Mart was given the New York Press Club's award for the best magazine story about business. He has appeared regularly on NPR, CNN, and Fox News. --此文字指 hardcover 版本。

richard e whitelock
5.0 颗星，最多 5 颗星 BE CAREFUL OF FOOL'S GOLD
2016年11月12日 - 已在美国亚马逊上发表
已确认购买
A very interesting book that describes in detail the effects that the introduction of a new WalMart Store in a community has upon its consumers and competition. Also discusses the relationship between WalMart and a few of its vendors. Doing business with WalMart must be done at your own risk. You might well find yourself in a position that you can no longer afford doing business with the behemoth because your very survival can be at risk if you become too successful and too dependent upon WalMart. And then there are those vendors that say "no" to WalMart when offered the opportunity to become a vendor. All that glistens very definitely may not be gold.
阅读更多
3 个人发现此评论有用

R. Moreland
5.0 颗星，最多 5 颗星 Still Timely and Relevant
2012年6月6日 - 已在美国亚马逊上发表
已确认购买
I had been interested in reading this book ever since I'd heard the author's interview on NPR several years ago, and I wasn't disappointed. This book is a very even-handed review of a touchy subject - the Wal-Mart Effect. As a numbers person, I love the statistics, I need the data. However, even people who aren't into the numbers will appreciate the way Mr. Fishman weaves the statistics into the anecdotes and interviews he presents to us.

Many of the stories in this book are well-known by now (like the cheap packs of underwear), others not so much, while some were absolutely jaw-dropping. I don't think anyone who reads this book could still shop at Wal-Mart afterwards, unless they live in a town where Wal-Mart has killed all the competition. And that's what they've been doing in town after town, county after county, year after year now.

My husband and I swore off Wal-Mart many, many years ago, and after reading this book, I am even more convinced that we made the right decision. Everyone votes with their dollars, and we believe in supporting our local town and economy, even if it costs us a little more. Read this book, and see if you don't agree. Otherwise, imagine a world where every town eventually consists of a few blocks of huge superstores and nothing else. Sure, you can buy literally everything at those stores, but why would anyone want to?
阅读更多
3 个人发现此评论有用

Jeffrey Dorn
5.0 颗星，最多 5 颗星 I love to Hate Wally-World...
2006年6月17日 - 已在美国亚马逊上发表
已确认购买
This book jumped out at me from the very first moment I saw it. It wasn't on my list of books to read however the title grabbed me. Wal-mart is on the leading edge of my favorite topics. I don't shop at Wal-mart anymore. I have come to dislike Wal-mart. As far as the book goes its a good read. Fishman has a nice style of writing like any good reporter should and the pace and presentation of the story he tells reads like a good episode of 60 Min. I enjoyed it.

There is nothing stunning about the facts Fishman presents to the reader. That is, if you, like me, read a wide variety of center to left news magazines in addition to all the right wing spew that oozes out of the Television. The Wal-mart effect has been well documented in "The Nation", "Mother Jones" and "The Progressive" magazines for years. It is an ongoing story. The real kick in the pants is that this is now main stream. Wal-mart is way out of control. Wal-mart is out of control in the way a 380 lbs linebacker with the mind of a 4 year old is out of control. The linebacker needs handlers to keep him from hurting those around or himself and in that sense Wal-mart needs the government to step in and handle them. The reasons why are very well presented in the book which I encourage you to read. (I borrowed the anology from Fishman)

There are two other things that interested me about this book. One is Wal-marts dedication to bringing the shopper the lowest price at any expense. I feel quality has been sacrificed. Fishman lists a variety of examples from sprinkler to blue jeans that have had the quality cut as well as the cost of labor inorder to achieve the 5% cost cut per year mandated by Wal-mart policy. I think that the shopping experience at a Wal-mart suffers from lack of quality as well. Wal-mart is a manisfestation of the cheapening of our society. The other thing is taxes. Fishman doesn't really go into the Wal-mart effect on local municipalities. (Some but there is much more) Wal-mart shops for locations. They want cheap. They want towns to fork over municiple service and build streets and handle traffic AND give up a big tax break. They present themselves to the town selectmen as if the 300 jobs they bring into a community will be the payoff. If the town won't budge on a Wal-mart demand then they head up the road to the next town. Wal-mart dosn't want just the cake and the frosting... Wal-mart wants the serving spoon, the plate, the cart you wheeled it in on, you get the point. Fishman does touch on this issue in general. I would like to have seen a bit more information on this. The cost of 300 low pay, part time jobs with crummy insurance to the town that gets saddled with a Wal-mart is often so high thats it is not worth it. The health insurance gets paid by governemt services, the traffic gets handled by an already over stretched police force, the firedepartment now has added responsibility and by the time all the real costs are added up Wal-mart starts looking like a 800 lbs gorilla on the back of local taxpayers. I would venture a guess that would be one Wal-mart does not want to be well known.

All in all this is a must read. I use to shop a Wal-mart. Then I became a guilty exploiter of just the amazing fishing department. Now I have weaned myself off Wal-marts low price altogether. I just can't afford them anymore
阅读更多
8 个人发现此评论有用

John Amelung
5.0 颗星，最多 5 颗星 Great behind the scenes insights.
2019年9月19日 - 已在美国亚马逊上发表
已确认购买
Charles Fishman's, The Walmart Effect, provides a well researched, and a behind the scenes look at the world's largest retailer. He provides fascinating perspectives on how the company is run. A recommended read for both those in the retail industry and those not in the industry, but wanting to know more about how Walmart and other big box retailers operate.
阅读更多
1 个人发现此评论有用
加入亚马逊Prime，从此免运费
亚马逊Prime会员可享海外购美/英/日/德跨境免邮，全年无限次！更有免费无限次阅读电子书服务
> 立即加入
了解我们
合作信息
帮助中心和购物指南