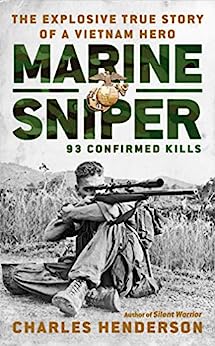 Charles Henderson is a veteran of more than 23 years in the United States Marine Corps, with a distinguished career spanning from Vietnam to the Gulf War, after which he retired as a Chief Warrant Officer. In addition to writing his own books and for various publications, he also runs his family's cattle enterprise in Peyton, CO. He is also the author of Silent Warrior, the continuing story of Carlos Hathcock, and Marshalling the Faithful. --此文字指其他 kindle_edition 版本。

Patrick Morris
5.0 颗星，最多 5 颗星 A Legend.
2018年1月3日 - 已在美国亚马逊上发表
已确认购买
To use a quote I learned as a young boy while watching The Sand Lot, “Hero’s live forever, but legends never die”. I first read this book after pulling it off the shelf in my family’s library. It was a book bought by or gifted to my father, I never did find out which. The young boy I was who wanted to be a warrior and a Marine some day saw the figure crouched low in the undergrowth and was instantly intrigued. I read that book from cover to cover in a whirl of colors and sounds as my imagination created and played the story in my head in the way it does that cause the pages to disappear. Only good books, well written by versed story tellers do that and aren’t a chore. This book is one of them.

I eventually did serve as a Navy Hospital Corpsman, and was stationed with a Marine Infantry platoon in Camp Lejeune, North Carolina. I served with 2nd Battalion 9nth Marines, 6th Marine Regiment, 2nd Marine Division. I only say this because I know firsthand the love and brotherhood that comes with being not only a warrior, but a warrior among many who together become something greater than themselves. To me, this book went from an incredible legend and story to one of an even personal and chilling level.

After my enlistment and time in the Navy was over, I worked as a Medical Assistant, and had and have the pleasure of working with a man who got to attend some special training during his time of service, the guest speaker at which was none other than the Hero of this book and a Marine Corps. Legend, Gunnery Sergeant Carlos N. Hathcock. On the back of a paddle this man I work with received as a token of gratitude for his time spent at one of his commands, is the signature of Hathcock, in black sharpie written onto the wood. To have held that paddle and seen with my own eyes the signature written by that man was an awesome experience.

This book is worth every second spent in its pages, and will definitely make you wish it never ended, although it does a graceful job of doing so.

Melvin Hunt
5.0 颗星，最多 5 颗星 A Highly Skilled Sniper!
2015年2月23日 - 已在美国亚马逊上发表
已确认购买
Before the American Sniper Chris Kyle there was another deadly sniper. His name was Carlos Hathcock. He was a Marine sniper during the Vietnam War. He was deadly as well
as daring. His enemies, the Vietnamese nicknamed him Long Tra'ng or white feather. He was one of the first snipers to use the 50 caliber as a sniper weapon. He was from
the state of Arkansas. He first came into prominence by winning the Wimbledon Cup of shooting. At an event held August 25,1965 at Camp Perry, Ohio he was the winning shooter.He promptly joined the Marine Corps and became a sniper. This began a series of fantastic shooting events that literally established him as a legend.His first
shooting success was at Elephant Valley. Hathcock and another sniper pinned 100 Viet Cong soldiers down for 5 days. This saved the lives of many American soldiers. There
was another evil force that Hathcock also dealt with. This was a Vietnamese female officer who was known as the Apache. This war one of the most sadistic and vicious
individuals that America had to deal with in the Vietnamese War. She had skinned one American soldier alive. Another had a basket tied on his head and had a rat sewed up
in the basket. The Apache also castrated an American soldier who bled to death. Hathcock shot her dead center and killed her.Her days of torturing American soldiers were
ended. On another project called Rio Blanco Hathcock was given the assignment of killing a master interrogator. He was a Frenchman named Jacques. Hathcock intercepted him on the way to interrogate two American airmen.There was also a talented Vietnamese sniper who was having incredible luck killing Americans. Hathcock finally caught up with
him and killed him. Hathcock was given an assignment to kill a Vietnamese general. This general was well guarded and nearly impossible to reach. Through shrewd planning
Hathcock finally killed him. Hathcock became such a terror that the Viet Cong finally put a bounty on his head of $10,000. Hathcock upon retirement had 93 kills. That record was not surpassed until Chris Kyle. He finally got out of the field of combat after being stricken with multiple sclorosis. This was an outstanding book about an
outstanding Marine. Be sure to read this book.
阅读更多
19 个人发现此评论有用
加入亚马逊Prime，从此免运费
亚马逊Prime会员可享海外购美/英/日/德跨境免邮，全年无限次！更有免费无限次阅读电子书服务
> 立即加入
了解我们
合作信息
帮助中心和购物指南