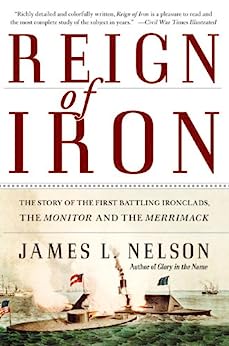 Reign of Iron: The Story of the First Battling Ironclads, the Monitor and the Merrimack (English Edition) Kindle电子书

At the outbreak of the Civil War, North and South quickly saw the need to develop the latest technology in naval warfare, the ironclad ship. After a year-long scramble to finish first, in a race filled with intrigue and second guessing, blundering and genius, the two ships -- the Monitor and the Merrimack -- after a four-hour battle, ended the three-thousand-year tradition of wooden men-of-war and ushered in "the reign of iron."

In the first major work on the subject in thirty-five years, novelist, historian, and tall-ship sailor James L. Nelson, acclaimed author of the Brethren of the Coast trilogy, brilliantly recounts the story of these magnificent ships, the men who built and fought them, and the extraordinary battle that made them legend.

James L. Nelson has served as a seaman, rigger, boatswain, and officer on a number of sailing vessels. He is the author of By Force of Arms, The Maddest Idea, The Continental Risque, Lords of the Ocean, and All the Brave Fellows -- the five books of his Revolution at Sea Saga. -- as well as The Guardship: Book One of the Brethren of the Coast. He lives with his wife and children in Harpswell, Maine.

dbradstr
5.0 颗星，最多 5 颗星 Best book I've read on the Monitor and Virgina conflict...
2019年9月19日 - 已在美国亚马逊上发表
已确认购买
I had a hard time putting this book down! The author is a skilled novelist but in this case has done a thorough job of researching the topics of people, places and things associated with this most eventful of naval battles. His tremendous ability to relate a story in a compelling way made this material exciting and compelling to read. It also made the multitude of characters real people that you felt that you got to know and appreciate. The entire naval world took notice of this four hour battle as marking the end of wooden warships. A superb read and a must read for anyone interested in this extremely pivotal conflict in all of naval history.
阅读更多
1 个人发现此评论有用

Tom Knapp
4.0 颗星，最多 5 颗星 The Monitor & the Merrimack ignite the imagination
2008年5月7日 - 已在美国亚马逊上发表
已确认购买
James L. Nelson brings their famous conflict to the fore in Reign of Iron, a historical study of the events leading up to and proceeding after the battle. The book begins with the Merrimack, newly recommissioned Virginia, steaming into its first battle and decimating the Union navy's proud wooden ships blockading Hampden Roads, and the Monitor, after struggling through rough seas down the coast, arriving on the scene at the end of a hard day's fighting. But Nelson, a master tactician himself, tears readers away before the two ironclads meet, taking us back to the beginning of the war and the race by North and South to develop ironclad vessels for battle.

Nelson carries readers quickly but thoroughly through the process, switching perspectives from North to South as each ship takes shape. Before you know it, you'll find yourself back at Hampden Roads on March 8, 1862 -- Virginia has ruled the day, leaving the pride of the Union's fleet -- the Congress and the Cumberland -- as smoking ruins, and the Minnesota aground in the shallow waters and waiting only for sunrise on March 9 for Virginia to finish the job.

But the Monitor, with timing worthy of a Hollywood blockbuster, arrived late on the 8th. Its diminutive size didn't inspire much confidence among sailors of the massive frigates who'd been bested that day, but the plucky iron "cheese box," as it was called, placed herself at Minnesota's side and defended her admirably. For hours, the two iron ships pounded each other with their big guns -- ultimately doing little real damage to each other, but stalemating in a spectacular fashion.

Nelson, a practiced novelist, shows his storytelling skills here by keeping history from being dry despite the long list of characters who appear in the narrative and the lengthy technical explanations that the story requires. This is a thoroughly enjoyable book that will appeal to history buffs, particularly those who enjoy Civil War or battles at sea.

John R. Linnell
5.0 颗星，最多 5 颗星 The Legend Comes Alive
2004年12月1日 - 已在美国亚马逊上发表
已确认购买
I first found James Nelson's writing when I was given "Glory in the Name" as a Christmas gift last year. It was one of the more unusual books I had read about the Civil War as it dealt with the Confederate Navy and was told from their point of view in a most riveting fashion. Since reading that book I have read all of Nelson's writings concerning Thomas Marlowe and his adventures in piracy and Isaac Biddlecomb and his adventures in the Revolutionary War, eight books in all. I have also read "The Only Life That Mattered" which involved a pirate legend and was highly entertaining.

Reign of Iron is Nelson's first venture into non-fiction and I can assure you that nothing suffers with the change. Exhaustively researched, Nelson brings back to life the days when the navies of the two waring factions were about to move from the days of wood to the reign of iron.

It is an important story, but one that was relegated to a supporting role in the overal panorama of the War Between the States. Now, Nelson has brought it forward, front and center and explained in detail the trials and tribulations that ushered in this dramatic change in how control of the oceans of the world evolved.

Most of us grew up with some knowledge of The Monitor and The Merrimac, but as Nelson explains, our general knowledge was superficial and usually wrong. This is the true story and it is an important one. Fans of this author will not be disappointed.
阅读更多
7 个人发现此评论有用

Wiley
4.0 颗星，最多 5 颗星 Interesting Reading
2019年6月29日 - 已在美国亚马逊上发表
已确认购买
If you are interested in learning more about the forces which lead to the construction of the Monitor and the Virginia, details of the construction and the actual battle, this book is for you. There is also a nice section detailing the lives of the men involved in the years following the battle. The main characters come alive in this easy to read book. Seriously lacking in the Kindle edition edition are photographs and maps. Both would have been valuable additions.
阅读更多

Forrest R. Lindsey
5.0 颗星，最多 5 颗星 History at its best
2011年8月23日 - 已在美国亚马逊上发表
已确认购买
This book is so engrossing that I read the whole thing at a single sitting, well into the night! The author does a superb job of immersing the reader into the stories of the parallel protagonists, both the Confederate and Union teams, until the pivotal battle between them. This author has the rare gift of making the personalities and the time come alive again and he has the solid nautical background to help the reader understand the context of these technologies and the men that made them come about. If you have any interest at all in history, buy this book - you won't regret it.
阅读更多
2 个人发现此评论有用