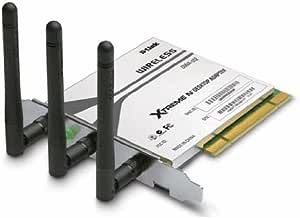 Let me explain: It does *Require* to be installed on a 32-bit v2.2 (or newer) Master PCI slot that provides 5v from the PCI bus interface. The *Problem* is that this is not detailed anywhere on the product's documentation.

If you plan on installing it on a new computer there is nothing to worry about. If your computer has a PCI Express graphics cards chances are it is recent enough.

But if you plan to install it in an older PC not only it probably won't work but it may also *Burn* your motherboard and power supply. Not because it is defective but most likely because your system doesn't meet the power requirements. This is actually what happened to me.

I love D-Link, they have good products, but in this case I strongly recommend you get a newer more efficient wireless adapter. For an older computer I would go with a USB wireless adapter instead like
ASUS (USB-N13) Wireless-N USB Adapter IEEE 802.11b/g/n USB 2.0 Up to 300Mbps Wireless Data Rates
阅读更多
2 个人发现此评论有用

Joe The Amazon Customer
5.0 颗星，最多 5 颗星 Wireless N for under 50 bucks
2010年12月9日 - 已在美国亚马逊上发表
已确认购买
I used this for my desktop that i moved to my room, instead of getting a 100ft ethernet cable, i decided to try this adapter despite many critical reviews. Luckily, i did because this adapter works GREAT on my vista 64 bit desktop. I picks up my router (A netgear WNDR3700 Dual band N) within 1 second of logging in to my account. Speeds are very fast, 17 mb/s download and 3.4 mb/s upload, results by speedtest.net. I usually get that much with the desktop hard wired to my router, so no loss in speed. Signal is pretty good through 3 walls, 1 heater, and my desk.

Pros:
Cheap- under $50 is a very good price to pay for xtreme performance
easy to install- just plug in the adapter to an empty PCI slot and screw in the antennaes
FAST!- very good speed and signal

Now for the Cons, the fit was a bit awkward with the PCI slot, but with a little motivation, you can screw the fastner in with little problem. Also, VERY IMPORTANT: DO NOT use the DLINK software included in the disc, it is sloppy and slow, and probably why alot of people have had problems with connections.

DO THIS INSTEAD: after you log in the first time after installing the adapter, windows will ask you to find the drivers, click yes, then when it tells you to insert the disc, do it. This way, windows will download only the drivers from the disc instead of the network software crap. After installation of the drivers, you are golden. Just click the "connect to" tab under the start menu like you would on your windows laptop and choose your network. All this is assuming you arnt already connected to the internet when installing because if you are, the driver installation program will just get the drivers online instead of from the disc.

Cons:
awkward fit- the adapter dosnt fit perfectly in the pci slot cover, but that might just be an isolated issue
DRAFT N 2.0- this is one of the later versions of wireless N, its not the official wireless N protocol that was issued a couple months ago, i still get very good speeds and connections, but just saying because amazon advertises this as the official wireless N.

Final thoughts:
overall, this is a very nice and easy adapter that is much better then the one in my wireless G laptop. just a small modification needed in driver installation, but i highly recommend it and wouldn't hesitate in buying it again if i had another desktop.
阅读更多
14 个人发现此评论有用

NIck Bond
3.0 颗星，最多 5 颗星 Not What I Expected
2012年1月27日 - 已在美国亚马逊上发表
已确认购买
A few years ago D-Link was a very good company but now I bought to routers from them this year and they were both bad and did not do what they were supposed to do. This is just another one of those products..... With 3 antennas and being an extreme N I though it would receive a much better signal when paired up with my Netgear N750 Wireless Router. Although the router is in another room next to mine I only get 20% signal with it. I bought a very long 9Dbi ASUS antenna and connected it to it and now I get about 70%. Another thing that is very bad about this adapter is that it does not receive 5Ghz signals. If you want a fast wireless N adapter for Gaming and file sharing I would not recommend this adapter, because it is not dual band and does not have a good range!!!!!!!!
阅读更多

Thomas M
1.0 颗星，最多 5 颗星 Unreliable with windows 7
2014年5月28日 - 已在美国亚马逊上发表
已确认购买
I bought this card before for another PC build (windows 7 pro x64) and the card worked alright. Signal didn't blow my mind and it produced average speeds. The card had some connection difficulties some times but resolved relatively painlessly. I decided that since it was relatively cheap and didn't cause many problems in my old build I would buy another for my new build (windows 7 ult x64). That was a mistake. I spent three days trying to get the card to function correctly with no progress.

The software that comes with the card is useless and unnecessary. When my computer did not recognize the card on start up (first issue) after I installed it I attempted to install the drivers via the provided disk. The install from the disk did not recognize the card had been installed either (second issue) and required me to restart the computer. After I finally got it to recognize that the card existed it "installed" and connected, but upon reboot the card was gone again (third issue) and the process started again.

Drivers direct from D-Link are just as useless. Manually installing drivers failed because the device did not recognize its own drivers. I don't know if this is a one off deal with this specific card since the other one I caused no issues but I will be using a different card/brand from now on.
阅读更多
加入亚马逊Prime，从此免运费
亚马逊Prime会员可享海外购美/英/日/德跨境免邮，全年无限次！更有免费无限次阅读电子书服务
> 立即加入
了解我们
合作信息
帮助中心和购物指南