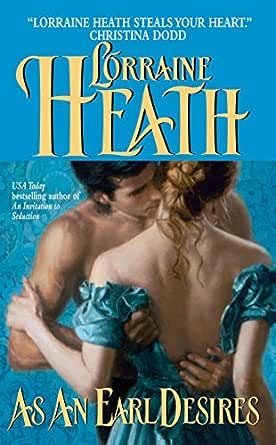 Lorraine Heath always dreamed of being a writer. After graduating from the University of Texas, she wrote training manuals, press releases, and articles, but something was always missing. In 1990, she read a romance novel and became not only hooked on the genre, but quickly realized what her own writing lacked: rebels, scoundrels, and rogues. She's been writing about them ever since, for both adult and young adult readers. Her work has been recognized with numerous industry awards, including RWA's RITA®, a HOLT Medallion, a Romantic Times Career Achievement Award, and several Texas Gold Awards.

Annie E.
2.0 颗星，最多 5 颗星 Boring
2018年10月19日 - 已在美国亚马逊上发表
已确认购买
I gave this 2 stars because the hero is an appealing, romantic young man and because if you didn't read the first book about the heroine, this book might work for you. For me, it was barely a 1 star book and not really worth reading.

***Spoiler Alert***
This is actually a sequel to "Love with a Scandalous Lord". Archie appears at the end. Camilla is integral to Rhys' story and she is selfish and depraved. In this next book, all that seems to have been swept under the rug and Camilla and Rhys are friends! Really? Camilla is not the same awful woman she was in the first book and there's no explanation for all the horrid things she did in that book. But the main problem with this book is that nothing happens: page after page of filler. Camilla laments ad nauseum: "I'm barren and I must have a Duke not an Earl". Archie has more substance, but it's lost in Camilla's endless repetition. I skipped pages and lost nothing because nothing happened! Finally a new earl turns up and we rush to the absurd ending: Camilla doesn't need a duke or an earl, Archie doesn't care about being an earl, and Camilla isn't barren. HEA and far less than satisfying. This could have been a short story.

I have to add that in one scene, the phrase "hits the spot" is used when Rhys offers Archie some potent Texas whiskey. It was a jarring phrase in a Regency romance and for good reason: it's American slang from the 20th century.

Amazon Customer
3.0 颗星，最多 5 颗星 Little disappointed
2017年12月9日 - 已在美国亚马逊上发表
已确认购买
I usually love Lorraine Heath books but this was not one of her best. I did not like the heroin she was just so selfish and her excuse for being selfish was not strong enough. It just kind of dragged a little bit. I actually had to leave the series for another book. I'll come back to the second book cuz I already bought it but I wish I didn't. I still however love her as an author along with Sarah MacLean, Tessa dare, Karen Ranney and Cathy Maxwell.
阅读更多

RETSmile
3.0 颗星，最多 5 颗星 Hard to get into, but likable hero
2008年11月2日 - 已在美国亚马逊上发表
已确认购买
I had such a hard time getting into this book because I just didn't like the heroine. I began warming to her a little after a couple of hundred pages and couldn't like her until the end. I just had a hard time understanding what a good man like the hero could see in her, especially with the values that she showed early on (titles above all else), with the exception of some charity. And because I didn't like the heroine and couldn't fathom a loving relationship between the two of them, it was a really slow go for me. I found myself bored with their relationship and with the progression of it. That said, I really like Lorraine Heath's books and recommend many of them. This one just wasn't that enjoyable for me.
阅读更多
4 个人发现此评论有用

Tassy
5.0 颗星，最多 5 颗星 well told
2014年2月24日 - 已在美国亚马逊上发表
已确认购买
Most anything written by Lorraine Heath is bound to be good and this is no exception. This is a very well told story of a woman that hides her basic self and sets herself to marry a Duke only in the end she loves someone else. I'm leaving it here as I don't wish to spoil your story.
阅读更多

W. M. Curtis
1.0 颗星，最多 5 颗星 The Earl That Wasn't
2013年6月29日 - 已在美国亚马逊上发表
已确认购买
Lorraine Heath is a very good author. I have enjoyed reading many of her books. This book started off great, but if someone had told me the premise of this story I would have saved my money.
So here it is...
ALERT!...MAJOR SPOILER...SPOILER...SPOILER...ALERT!
I didn't enjoy reading about a hero that becomes an earl, seems to enjoy it most of the time until about 3/4 of the way through the story another fellow shows up claiming he is the real earl and so the hero loses the earldom, moves to the country and becomes a school teacher. Really? This is not my idea of a great story line. There is a "Happily Ever After" though, because at the end of the story the heroine gives up being a Countess to marry the school teacher. I'm not making this up.
Most of the reviewers seem to like this book, but had I known this was where this story would end up, I would have passed.
阅读更多
6 个人发现此评论有用
加入亚马逊Prime，从此免运费
亚马逊Prime会员可享海外购美/英/日/德跨境免邮，全年无限次！更有免费无限次阅读电子书服务
> 立即加入
了解我们
合作信息
帮助中心和购物指南