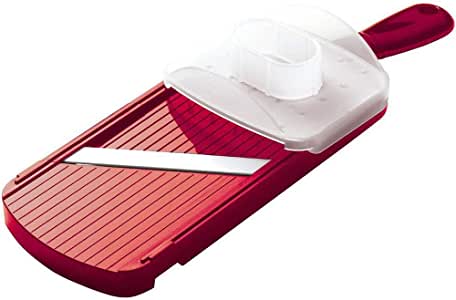 C. E. Hansen
3.0 颗星，最多 5 颗星 Thickest setting is thinner than advertised
2018年12月31日 - 已在美国亚马逊上发表
已确认购买
I mostly bought this because there were several comments that the blade was sharp enough for potatoes, as I wanted a mandoline for making Spanish Tortillas. The blade is indeed extremely sharp and easily went through a potato, but they claim 3mm on setting #4 and the thickest I got was some 2mm, which is too thin. I looked through the reviews before buying and only one person mentioned this, but he thought he had a bad product. I'll likely return it for this reason. Also - the thickness adjustment is clunky and perhaps likely to break easily.

I looked at the best-selling Mueller Austria, which has a lot of accessories I don't need, but what turned me off the most were several comments that potato slices got stuck and the blades dulled quickly. They are said to have excellent customer service, so lifted their C.S. email address from an offer to make things right and sent them a message asking if was worthwhile for me to buy theirs.

BTW - from reading reviews I am dubious of angled models (vs. 90 degree or V-shape), as they often tend to have comments that the cut is varied thickness from one side to the other, and one even included a photo.

I'm now looking at an infinitely variable thickness model (0.3-9 mm) from Benriner for a bunch more money. I might first try to see if I can find an appropriate fixed-width slicer, as I only really want it for one thing. I'll have to search for "potato slicer". This does have a slightly angled blade, but Japanese technology trumps that.

A few general comments on mandoline.

Reading reviews, it's clear that there are a whole lot of idiots out there buying these.
I don't just mean those cutting themselves the first time they use it by not paying attention to what they're doing, or even the ones who say it's TOO sharp !!! duh . . . , but all the really dumb reasons for not liking the one they bought - including the many who say the food pusher doesn't work - see below. I do have sympathy for those who bought the brand where the cheaply (if at all ?) engineered black plastic "grabbers" easily broke off and got sliced into the food.

It's also obvious that all of the "safety food holders" are junk. I think I tried it for my very first potato slice and then just used my hands. The second time, I put on the gloves I bought. A big part of the problem is the round bottoms - and tops) of many firm veggies, so if you have something that's large enough to warrant it I would suggest cutting it in half first, then slice flat side down, with or without the holder. Of course this means reaching the top more quickly, but read on friend. I think this would make the holders much more effective, but they're just too fiddly for me. They also add time and effort, especially toward the bottom. I strongly suspect that these were invented just as a CYA measure to protect manufacturers from law-suits. There's something like a nine to one ratio of people saying they're useless to those who actually like them - for whatever odd reason. I'm amazed at how many people seem to think it's just a problem with the one they got with their brand. Dolts.

As for the last half-inch or so - I'm good at judging where/when the last slice is that a little bit of potato is still above the slicer edge - please don't try this at home! Part of my thinking is that the last little bit of potato is so rounded, that it's unlikely to cook in a different time even if the tiny center is 1/16 (or less) thicker than the rest of it. I may also use a fork to help push it through. I well realize that I could just toss it, but I'm stubborn and my mother grew up during the Depression, so I try not to waste anything. I see people saying to hand slice the last bit, but I'm buying a mandoline precisely so I don't have to do that! Sort of like the meat lovers attitude toward vegetarianism ;-)

Mary G.
5.0 颗星，最多 5 颗星 VERY SHARP mandoline that cuts very thin slices of even sweet potatoes!
2018年2月13日 - 已在美国亚马逊上发表
颜色: 红色已确认购买
Works extremely well if you need something sliced either very thin or ultra-thin! Even sweet potatoes are a piece of cake. The hand guard isn't worth a flip (but neither are any of the hand guards for the 5 or 6 different mandolins I have purchased over the last couple years), but just buy yourself a pair of the No-cut gloves, and then you can safely slice things just by holding them in your gloved hand. This puppy is REALLY SHARP, so don't try slicing without those gloves!!!
阅读更多
39 个人发现此评论有用

Big0725
5.0 颗星，最多 5 颗星 Wow! What a slicer.
2018年11月30日 - 已在美国亚马逊上发表
颜色: 红色已确认购买
Never have I been as impressed with a product as I have been with my new Kyocera. I needed to give it a test so I whipped out an onion and set the slicer on 4. I kid you not, I sliced an entire large onion is 15 seconds. Yes, the onion was too big for the slicer, so I cut the ends off to make it fit.
On #4 the slices are the thinnest I've ever gotten with other mandolines.
And sharp! The onion glided over the blade so easily I had to look underneath to see if it was actually cutting. I have only one regret ... I didn't get the full set with the other blades. I will get the the grater and the plastic container that catches what comes out, that's for sure.

So, if you need a slice of onion for a burger, use your Kyocera knife. But if you want to saute some onions or makes an onion loaf (thanks for teaching me how to cook ma) or home-made potato chips,

Get this now!!
阅读更多
14 个人发现此评论有用

Sally Santos
2.0 颗星，最多 5 颗星 Very sharp with ineffective hand guard, thumbs down if you still have a thumb
2019年9月18日 - 已在美国亚马逊上发表
已确认购买
I gave this two stars for being sharp, it cuts well! Too well. I took off part of my thumb, a big part, even using the safety hand guard. After my trip to the hospital to be stitched up, I chalked it up to me being clumsy. Well, the next day someone else in the household did the same thing resulting in a much less severe cut, but in exactly the same manner.
The guard is much too small unless you have very tiny hands. My thumb and pinky hang over the edge. I have thrown this one away and purchased and since used (when you fall off a horse, you've got to get back on) the KitchenAid KC312OHOBA Adjustable Hand-Held V-Blade Mandoline Slicer which has an excellent hand guard at the same price point.
阅读更多

Vale01
5.0 颗星，最多 5 颗星 One of the best things in the kitchen I've ever owned
2017年3月24日 - 已在美国亚马逊上发表
已确认购买
One of the best things in the kitchen I've ever owned. I was given one as a gift about 10 years ago, it was always sharp, and only recently did the edge of the plastic break from too much pressure while slicing. Immediately bought another because I love how it makes easy work of so many prep tasks. I will note that the adjustment mechanism on this does not change as smoothly as the first I had, but I rely on being able to change the thickness of slices quite often, so consider that before buying one that you cannot change. The highlight of using this mandoline for me is slicing whole, peeled garlic into nearly paper thin chips instead of crushing garlic for dishes like tomato sauce, cream sauce, etc. The garlic flavor is more nuanced and the slicing goes like a dream (just watch your fingers, because this thing is SHARP).
阅读更多
12 个人发现此评论有用
加入亚马逊Prime，从此免运费
亚马逊Prime会员可享海外购美/英/日/德跨境免邮，全年无限次！更有免费无限次阅读电子书服务
> 立即加入
了解我们
合作信息
帮助中心和购物指南