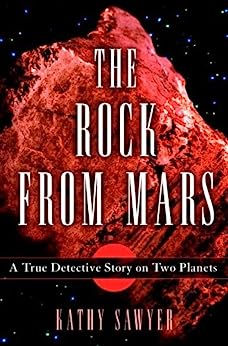 英语版本 Kathy Sawyer (作者) 格式: Kindle电子书
|
分享
分享 <分享样章>
广告
显示所有 格式和版本 隐藏其他格式和版本
In this riveting book, acclaimed journalist Kathy Sawyer reveals the deepest mysteries of space and some of the most disturbing truths on Earth. The Rock from Mars is the story of how two planets and the spheres of politics and science all collided at the end of the twentieth century.
It began sixteen million years ago. An asteroid crashing into Mars sent fragments flying into space and, eons later, one was pulled by the Earth’s gravity onto an icy wilderness near the southern pole. There, in 1984, a geologist named Roberta Score spotted it, launching it on a roundabout path to fame and controversy.
In its new home at NASA’s Johnson Space Center in Houston, the rock languished on a shelf for nine years, a victim of mistaken identity. Then, in 1993, the geochemist Donald “Duck” Mittlefehldt, unmasked the rock as a Martian meteorite. Before long, specialist Chris Romanek detected signs of once-living organisms on the meteorite. And the obscure rock became a rock star.
But how did nine respected investigators come to make such startling claims about the rock that they triggered one of the most venomous scientific battles in modern memory? The narrative traces the steps that led to this risky move and follows the rippling impact on the scientists’ lives, the future of space exploration, the search for life on Mars, and the struggle to understand the origins of life on Earth.
From the second the story broke in Science magazine in 1996, it spawned waves of excitement, envy, competitive zeal, and calculation. In academia, in government agencies, in laboratories around the world, and even in the Oval Office–where an inquisitive President Clinton had received the news in secret– players of all kinds plotted their next moves. Among them: David McKay, the dynamic geologist associated with the first moon landing, who labored to achieve at long last a second success; Bill Schopf of UCLA, a researcher determined to remain at the top of his field and the first to challenge McKay’s claims; Dan Goldin, the boss of NASA; and Dick Morris, the controversial presidential adviser who wanted to use the story for Clinton’s reelection and unfortunately made sure it ended up in the diary of a $200-an-hour call girl.
Impeccably researched and thrillingly involving, Kathy Sawyer’s The Rock from Mars is an exemplary work of modern nonfiction, a vivid account of the all-too-human high-stakes drive to learn our true place in the cosmic scheme.
阅读更多
Previous page
Next page
Kindle 电子阅读器
Kindle Fire 平板电脑
免费的 Kindle 阅读应用程序
查看所有受支持的设备
›  查看更多商品促销信息

AKN
5.0 颗星，最多 5 颗星 Tiny Mars visitors in a rock?
2012年9月17日 - 已在美国亚马逊上发表
已确认购买
I have been fascinated with the Mars meteorite that was the subject of so much scientific controversy. So I was delighted to find this book to help shed some light on it for me.

This got off to a somewhat slow start, which was necessary to give the background information on how this meteorite was found, and why it subsequently languished, all but forgotten, in a drawer for many years before someone finally thought to more carefully examine it.

But what a rock it turned out to be. It turned into such a big deal and subject of intense interest that President Clinton made an announcement about the mind blowing discovery of what "looked like" life forms from another planet.
These apparent life forms came to our planet in the form of microbial fossels, about one hundred times smaller in diameter than a human hair.

This book becomes more and more fascinating as you go along. If you have an interest in astronomy and fossels this goes into much detail about the hundreds of scientific tests that were carried out on pieces of this meteorite by scientists all over the world as they tried to figure out what exactly was in this rock and if it was, in fact, biological in nature.

As one scientist said after viewing a super-thin slice of this under an electron microscope, if this had come from a rock from earth it would automatically be seen as fossils of microbes. The anatomical parts were indeed present, as were egg shaped objects which couldn't be identifed aside from the abundant carbonite elements, which were clustered around the microbial shapes. There was water and carbon dioxide, as well as carbonites, contained within this fist sized rock.

Over three hundred scientists worldwide examined and tested minute pieces of this meteorite, all drawing their own varied conclusions about the meaning of their test results. How does a scientist say with absolute certaintly that what his tests are showing are the result of life? It turns out the answer is not that easy. Yes, the tests do indeed indicate that everything is present in this amazing meteorite for an average scientist to conclude that there was life forms of microbes housed inside. But that doesn't mean with 100% certainty that this is evidence of life from Mars.
A scientist has to be very very careful to err on the side of caution about such an important discovery. Nasa eagerly proclaimed that this Mars meteorite shows evidence of past life on Mars, but was forced to back away from that pornouncement by the powers that govern it, for unexplained reasons.

I listened to this on my Kindle and couldn't wait to find time each day for the next thrilling chapter in this excellent book. If you have scientific curiosity about what may to date be our best clue about life on Mars, you will love this well written book. It is a detective story with hundreds of detectives piecing together clues about something that may be the beginning of one of the greatest discoveries mankind has ever made.

Amazon Customer
5.0 颗星，最多 5 颗星 One of the most important books you will ever read!
2020年1月28日 - 已在美国亚马逊上发表
已确认购买
As Sawyer put it, the discovery of this rock by Robbie Score back in 1984 in the most desolate place on Earth, Antartica, changed our models of reality regarding the detection of life on Earth and other planets. I originally wanted to learn about the meteorite ALH84001 and in this book I found everything I could have possibly asked for. There are so many fascinating things I learned from this book that I can honestly say, it is one of those books that changed my life and the way I look at the world, especially the scientific world regarding the detection of life on Earth and Mars. No review on this book will do it justice. Just like the rock, it is a true gem. I am glad it was Kathy Sawyer that wrote the book on the rock as she not only gives true accounts of the story of the rock and the events that followed its discovery, but her storytelling had me reading each page and able to connect the dots to a universe I never knew existed. I will keep this book by my bedside forever. Thank you Kathy for all the hard work and research you put into this book. I am eternally grateful!
阅读更多

Richard Merriman
5.0 颗星，最多 5 颗星 One of the best books I've ever read
2017年11月17日 - 已在美国亚马逊上发表
已确认购买
I read to the point it's a sin and this is one of, if not the best book on science and the people involved that I've ever read! I wish there was some way to give it more than 5 stars. It points out, but subtly, the problems with NASA and how the bureaucracy has taken over from the scientists and it also shows how hard it is to "go up against the establishment". How things will finally turn out with this "rock", the real hero in this book, isn't clear since there's still a great deal more we need to learn about Mars as well as about life in general but yet again I can't recommend this book too highly. BUY IT!
阅读更多
3 个人发现此评论有用

William Wright
2.0 颗星，最多 5 颗星 Good story painfully told
2018年2月13日 - 已在美国亚马逊上发表
已确认购买
The story is potentially interesting, but the writing is so bad that it's painful. The author tries to use so many inappropriate analogies, metaphors, similes, adjectives, etc. She strives so hard to be poetic that is she disregards the science - which is what the book is supposed to be about. Also, she includes so many irrelevant details that it hampers the storytelling and drags things out. And she tries to make the event and the discoveries more momentous than it really is. Painful to read, but a story I wanted to know.
阅读更多
2 个人发现此评论有用