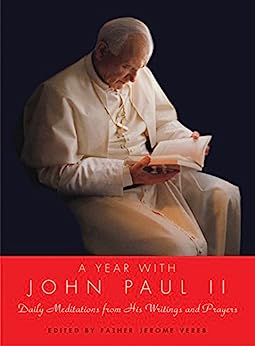 A Year with John Paul II: Daily Meditations from His Writings and Prayers (English Edition) Kindle电子书

Called the Pilgrim Pope, a pope of the people, John Paul II connected with his flock from the highest to the lowest. He was one of history's most beloved popes among Catholics and non-Catholics alike, a man whose indomitable spirit touched and taught us all. A Year with John Paul II showcases his most important teachings as well as his inspirational writings, in a daily devotional format that will inspire readers and deepen their reflections and meditations.

With a foreword by Cardinal William W. Baum, head of the Holy See's Major Penitentiary and former archbishop of Washington DC, an introduction by Bishop William Murphy, and a moving eulogy composed for the pope's funeral by Cardinal Joseph Ratzinger (now Pope Benedict XVI), A Year with John Paul II will take readers on a year-long spiritual journey with this deeply religious and inspiring man.

Karol Wojyla was born on May 18, 1920, in Wadowice, Poland. He survived the Nazi occupation during World War II and was ordained to the priesthood in 1946. He was appointed archbishop of Krakow by Pope Paul VI. On October 16, 1978, he ascended to the papacy, taking the name John Paul II. During his papacy he greeted an estimated sixteen million pilgrims at the Vatican's general audiences. Pope John Paul II died in April 2005.

HC2013
5.0 颗星，最多 5 颗星 Wonderful!
2020年4月20日 - 已在美国亚马逊上发表
已确认购买
I admire Saint John Paul II and now I can learn more about his philosophy and teachings. Thank you for a wonderful book!
阅读更多
1 个人发现此评论有用

SEAN CONNERY
5.0 颗星，最多 5 颗星 A must if you like Pope John Paul II
2015年5月11日 - 已在美国亚马逊上发表
已确认购买
I have never been disappointed wth anything that is written by Pope John Paul II, as I find his writings very helpful and easy to understand and it always seem to fit into whatever is going on in my life at the time.
True divine intervention