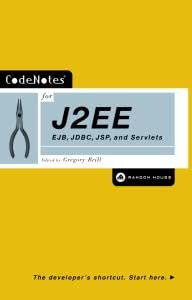 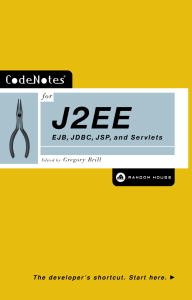 What Is the Java 2 Enterprise Edition (J2EE)?

2. A collection of API extensions that relate to enterprise systems. These APIs range from e-mail access to database connectivity, bridging concepts as different as distributed computing and web-based applications.

In 1999, Sun announced a fundamental redefinition of the Java platform. Java had originally been designed as an all-encompassing ?Write Once, Run Anywhere?? system; but Java applications rapidly exploded across a tremendous range of platforms, from smart cards to air conditioners (e.g.Obviously, the requirements for an offline payment system on a smart card are vastly different from those of an enterprisewide, web-enabled stock trading platform.

When the initial J2EE specification was announced, many of the enterprise APIs already existed as independent packages. Thus it is often difficult to tell whether an API is part of Java 2 Enterprise Edition or Java 2 Standard Edition, or is a stand-alone package, or is included in more than one edition. As the various Java editions mature and the literature catches up with the changes in the Java platform, these distinctions should become clearer.

The most important J2EE 1.2.1 components are:

-JDBC 2.0?JDBC is the primary mechanism for using Java to communicate with SQL-compliant databases. J2EE requires the JDBC 2.0 Optional Package, an extension to the core JDBC API included with the Java 2 Standard Edition. Chapter 3 explains the core concepts of JDBC and working with relational databases.

-Java Naming and Directory Interface (JNDI) 1.2?JNDI provides a transparent Java interface to various naming and directory services, including LDAP, NDS, DNS, and NIS(YP). JNDI is briefly covered (along with RMI and JavaMail, below) in Chapter 4, and extensively covered on the CodeNotes website.

-JavaMail 1.1?The JavaMail API provides an interface for sending and receiving e-mail through standard systems such as SMTP and POP3. This CodeNote describes sending e-mail, and several examples for reading e-mail are available on the website aJ2010004.

-Enterprise JavaBeans (EJB) 1.1?A JavaBean is a small Java class that follows design rules for exposing member variables. Enterprise JavaBeans (Chapter 6) extend the JavaBean concept into the world of distributed computing. EJBs are used for encapsulating business logic in small, reusable packages that are easily configured into complex applications.

-Java Transaction API (JTA) 1.0?This component provides support for distributed transaction systems. The JTA provides a user-level interface for creating and managing transactions. The use of JTA is beyond the scope of this CodeNote, but several examples are available on the WebSite aJ2010001.

-Java Messaging Service (JMS) 1.0?Many enterprise systems rely on secure, reliable messaging systems for publish-subscribe and broadcast services. JMS provides an interface to these technologies. J2EE 1.2.1 requires that the API definitions be included with any J2EE-compliant server product, but does not require an actual implementation. Although JMS is not covered in this book, several articles on JMS can be found on the website aJ2010002.

Several additional components, such as the Java Authentication and Authorization Service (JAAS), are in draft form and will be included in the next J2EE release, version 1.3, which was in its final draft phase at the time of writing. Chapter 9 (Darkside) includes a brief discussion of several of these technologies.

A common belief is that J2EE is nothing more than a wrapper for a set of toolkits. However, J2EE does contain some new tools that are inherently part of the specification. These tools provide packaging for systems components. By extending the traditional Java Archive, or JAR file, into Web Archive (WAR) and Enterprise Archive (EAR) files, the J2EE deployment specification provides much greater flexibility for distributed enterprise systems.

Finally, the deployment specification includes support for environment variables maintained by the J2EE container. These variables can range from database access to e-mail connectivity to default parame- ters. Environment settings are accessible through a naming service and JNDI.

The deployment specification is detailed in Chapter 8 (Deployment).Instead, the Internet and World Wide Web exploded and Java was quickly drawn into the realm of platform independent computing.

Sun?s philosophy for Java consists of two key statements: ?The Network is the Computer?? and ?Write Once, Run Anywhere??. These two concepts are built into every aspect of Java and J2EE.

JDBC, JSP, Servlets, and EJB all require components that are built by third-party vendors. These components must conform to the basic J2EE specification but can have dramatically different support for the extended features of J2EE. The following lists of vendors include many of the market leaders but are by no means exhaustive.

Most database vendors provide a JDBC driver for their database. For example, if you are using an Oracle database, you should strongly consider using the Oracle JDBC driver. However, several companies provide cross-database-compliant drivers that are very feature-rich. --此文字指其他 kindle_edition 版本。

Gregory Brill is the series editor of CodeNotes and the founder and president of Infusion Development Corporation, a technology training and consulting firm that specializes in architecting securities trading and analytic systems for several of the world’s largest investment banks. He has written for C++ Users Journal, and is the author of Applying COM+. He lives in New York. --此文字指其他 kindle_edition 版本。

This is NOT a reference guide to learn something. This is just to use if you want to recall something.

Amazon Customer
5.0 颗星，最多 5 颗星 A Great Way To Understand J2EE
2002年4月28日 - 已在美国亚马逊上发表
I've recently discovered the CodeNotes series, and have become a big fan. The admirable goal of these books are to give you a practical understanding of the subject in 200 pages or less. I've got 3 of these books, and find them all to be well-written, appropriately concise, yet filled with what's necessary to get you up to speed on the subject matter.
This particular CodeNotes covers well the big topic of J2EE, the underlying API's, JDBC, JSP, and does a great job with EJB's. The treatment of these subjects is complete from a high level, but you'll have a good foundation when you drill down in a given area.
I applaud these sorts of books making an inroad into the technical shelves. More often than not, I don't need a 1000 page technical epic that is a chore to both carry around and actually read. Also, because many of these books contain a CD that may or may not have any useful material, suddenly you've got a 15 pound reference monster ...!
This book is a real value for the price, it gives you the information you need. The extra material, such as expanded coverage of technical specifics and web links, is handled on the CodeNotes website, so no "CD Included" surcharge.
Nice coverage of the subject, from a happy reader not connected with CodeNotes at all. Just happy to promote the cause of succinct technical reference!

Javafanatic
5.0 颗星，最多 5 颗星 Gets Right to the Point
2002年7月9日 - 已在美国亚马逊上发表
I like this book very much because it gets right to the point. Sometimes when reading through massive programming books, I find myself wondering how relevant the current topic is. Is this really something that is widely used in the real world, or is this fluff? Every page of this book contains just the important stuff with no filler.
The section on EJB may have even been a bit too consise. Enterprise Java Beans is a very complicated topic that is difficult to give a short summary of. Even so, it's nice to have a well-written book that explains how the whole of J2EE hangs together. (I have another book about EJB).
I hope that smaller technical books become the trend. I'd much prefer a consise 250 pager over a 1000 page book that has no focus.

Jonathan Hawkins
5.0 颗星，最多 5 颗星 Small profile yet gets right to the point!
2003年3月5日 - 已在美国亚马逊上发表
This book was a real pleasure to own. The book is small enough to fit in my notebook computer bag and contains essential reference information, so that I could write some prototype code within an hour or two. My leather computer bag now has an imprint of this book, which I don't mind because of the confidence it gives me to know it is available.
The book covers all the essential information needed to install the J2SE, J2EE and TomCat environment in Windows. There was little more than references to installations for Solaris and Linux. Most folks with UNIX experence shouldn't have much problem setting up the environmental variables.
An annoyance with this book is that Chapter 4 attempts to cover topics with JavaMail, RMI, COBRA, JNDI with little content. The chapter appears to be an aborted attempt since it is only 3 pages long. These topics should just be placed in a glossary.
I am also really pleased with the publishers profile for this series of books. Most publishers of these books tend to go for quantity over concise reference material. This is a big relief compared to "Java for the Web with Servlets, JSP and EJB" which is 976 pages (a big 4 lb red brick).

Jungyong Kim
5.0 颗星，最多 5 颗星 Just Great! Suggest that publishers benchmark this series.
2004年3月28日 - 已在美国亚马逊上发表
I think I was very lucky to have found this book while I was struggling to grasp the idea of what J2EE is all about reading a very thick book from another publisher. I am quite sure 3 days spent on reading this book was worth much more than over 10 days spent on getting lost while reading another one. How amazing it is that such a small book covers almost all the important aspects of J2EE (even design issues!). I can't wait for the new books in this series (such as C, C++, etc) to hit the market. Other publishers that are notorious for their verbose style in their books should learn some philosophy from this series and stop wasting the valuable time of the readers with enticing but practically unnecessary details.
阅读更多
3 个人发现此评论有用
加入亚马逊Prime，从此免运费
亚马逊Prime会员可享海外购美/英/日/德跨境免邮，全年无限次！更有免费无限次阅读电子书服务
> 立即加入
了解我们
合作信息
帮助中心和购物指南