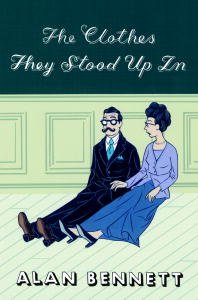 The Clothes They Stood Up In (English Edition) Kindle电子书

"'Welcome to the wonderful world of Alan Bennett, deliciously enriched by the voice of the master himself'. (The Sunday Times)" --此文字指其他 kindle_edition 版本。

The Ransomes had been burgled. "Robbed," Mrs. Ransome said. "Burgled,"Mr. Ransome corrected. Premises were burgled; persons were robbed. Mr. Ransome was a solicitor by profession and thought words mattered. Though "burgled" was the wrong word too. Burglars select; they pick; they remove one item and ignore others. There is a limit to what burglars can take: they seldom take easy chairs, for example, and even more seldom settees. These burglars did. They took everything.

The Ransomes had been to the opera, to Così fan tutte (or Così as Mrs. Ransome had learned to call it). Mozart played an important part in their marriage. They had no children and but for Mozart would probably have split up years ago. Mr. Ransome always took a bath when he came home from
work and then he had his supper. After supper he took another bath, this time in Mozart. He wallowed in Mozart; he luxuriated in him; he let the little Viennese soak away all the dirt and disgustingness he had had to sit through in his office all day. On this particular evening he had been to the public baths, Covent Garden, where their seats were immediately behind the Home Secretary. He too was taking a bath and washing away the cares of his day, cares, if only in the form of a statistic, that were about to include the Ransomes.

On a normal evening, though, Mr. Ransome shared his bath with no one, Mozart coming personalized via his headphones and a stack of complex and finely balanced stereo equipment that Mrs. Ransome was never allowed to touch. She blamed the stereo for the burglary as that was what the robbers were probably after in the first place. The theft of stereos is common; the theft of fitted carpets is not.

"Perhaps they wrapped the stereo in the carpet,"said Mrs. Ransome.

It had not been much of a Così. Mrs. Ransome could not follow the plot and Mr. Ransome, who never tried, found the performance did not compare with the four recordings he possessed of
the work. The acting he invariably found distracting. "None of them knows
what to do with their arms," he said to his wife in the interval. Mrs. Ransome thought it probably went further than their arms but did not say so. She was wondering if the casserole she had left in the oven
would get too dry at Gas Mark 4. Perhaps 3 would have been better. Dry it may well have been but there was no need to have worried. The thieves took the oven and the casserole with it.

The Ransomes lived in an Edwardian block of flats the color of ox blood not far from Regent's Park. It was handy for the City, though Mrs. Ransome would have preferred something farther out, seeing herself with a trug in a garden, vaguely. But she was not gifted in that direction. An African violet that her cleaning lady had given her at Christmas had finally given up the ghost that very morning and she had been forced to hide it in the wardrobe out of Mrs. Clegg's way. More wasted effort. The wardrobe had
gone too.

They had no neighbors to speak of, or seldom to. Occasionally they ran into people in the lift and both parties would smile cautiously. Once they had asked some newcomers on their floor around to sherry, but he had turned out to be what he called "a big band freak" and she had been a dental receptionist with a time-share in Portugal, so one way and another it had been an awkward evening and they had never repeated the experience. These days the turnover of tenants seemed increasingly rapid and the lift more and more wayward. People were always moving in and out again, some of them Arabs. --此文字指其他 kindle_edition 版本。

Alan Bennett is one of Britain's best-loved and most highly acclaimed writers. He has written widely for radio, television and theatre. His latest play, The History Boys, won several awards, including Evening Standard and Critics' Circle Awards for Best Play and the Laurence Olivier Award for Best New Play. It also won six Tony Awards, including Best Play, following an extremely successful transfer to Broadway. In 2006 Bennett was named Author of the Year at the British Book Awards for Untold Stories, his collection of memoirs and diaries. --此文字指其他 kindle_edition 版本。
阅读更多

Constant Reader
5.0 颗星，最多 5 颗星 unexpected gem
2016年7月22日 - 已在美国亚马逊上发表
已确认购买
This book was a great surprise, suggested by a book club, I had never heard of Allen Bennett, but it turns out he is wise and knowing in the ways of what we now call "Minimalism" as well as communication between couples, and even an interesting take on death of a spouse and personal growth. If you find this book speaks to you about grief, "The Beginner's Goodbye" by Anne Tyler may also speak to you. The accompanying novella, "The Lady in the Van" also speaks to the dilemma of those who are diffident and just plain cowardly about refusing those who impose on them --and how that imposition sometimes plays out. (good film also with Maggie Smith)
阅读更多
9 个人发现此评论有用

Jennifer Buchanan
3.0 颗星，最多 5 颗星 Preposterous premise, but Bennett makes it work delightfully well
2012年12月21日 - 已在美国亚马逊上发表
已确认购买
Another thoughtful and humorous novella by Alan Bennett. As with "The Uncommon Reader," this book has a preposterous premise, but Alan Bennett makes it work. And in fact, it's the ridiculousness of the premise that makes the book so compelling! Mr. and Mrs. Ransome come home from the opera one night to find that their flat has been completely cleaned out... down to the stove and appliances--including the casserole left to warm in the stove! This elicits very different reactions from Mr. and Mrs. Ransome, each of whom have been going through the motions for years, stuck in stagnation and complacency.

I didn't enjoy this one quite as much as "The Uncommon Reader," I didn't feel the same kinship with the Ransomes as I did with the Queen in "Reader." Still, this is a funny and though-provoking book, absolutely worth the afternoon it will take you to read it.

cas
5.0 颗星，最多 5 颗星 Unexpected
2019年10月23日 - 已在美国亚马逊上发表
已确认购买
I was only looking for a light read after finishing a more stressful story. This started out as just that. Soon it became so much more,I began to think of my own home and all that I have. Then wondered if all of this is necessary, and like the main character if I really need it or would life in some ways be so much easier with less. Excellent book with a truly surprising ending.
阅读更多

Kindle Customer
5.0 颗星，最多 5 颗星 Do our belongings define us?
2012年10月31日 - 已在美国亚马逊上发表
已确认购买
Bennett is a master of the cool, dry British narrative. This novella is pithy and perfect in its self possession. The story opens when the Ransome's return from their beloved Mozart "Cosi". In fact, but for Mozart would probably split up years ago". Stripped of their daily props, the Ransomes come to confront themselves. The wife finds freedom on a variety of levels, while the husband seeks comfort in stricter rigidity. We find them in their improvised home. She has a rocker found in a shop she would have never considered, while he sits erect at a card table and chairs.
Given the half wished reality of stripping of the old, where would we find ourselves? This book enables one view of the answer.

Joan Waddell
5.0 颗星，最多 5 颗星 A little book with a big message
2019年11月3日 - 已在美国亚马逊上发表
已确认购买
At first I was disappointed to find that The Clothes They Stood Up In was a more like a short story than a novel-length book but the story that's packed into these few pages will make you think and might challenge your assumptions about the things you own. I would highly recommend this little gem!
阅读更多
加入亚马逊Prime，从此免运费
亚马逊Prime会员可享海外购美/英/日/德0门槛跨境免邮，更有会员专享折扣！
> 立即加入
了解我们
合作信息
帮助中心和购物指南